WWE Roadblock airs live this Saturday, March 12, on WWE Network. The live special (that is not quite a pay-per-view) is headlined by Triple H defending the WWE World Heavyweight Championship against Dean Ambrose, as well as a one-on-one match between Bray Wyatt and Brock Lesnar. The card’s looking pretty sparse so far, but here’s what’s been announced for the show:

As per usual, here’s our analysis of the card and our wildly accurate (cough) predictions. What will happen at the final bump in the Road To WrestleMania? Wait, let me rephrase that: will anything happen?

What Should Happen: We are … not starting off strong. The New Day have to be Tag Team Champions heading into WrestleMania, right? What should happen here is a strong win over what on paper should be a strong challenger, and then we set up their actual WrestleMania challengers on Monday. What are the chances that the tag straps even make it to the WrestleMania card? New Day is the greatest and they deserve a WrestleMania entrance where they ride out on actual unicorns, but aren’t the tag titles kinda the Vincent J. McMahon Legacy Award for Pre-show Excellence?

What Will Happen: On Raw, The New Day defeated Y2AJ so cleanly it broke up the damn team. It was one of the hottest Raw matches of the year. Do we celebrate that by having them lose to King Take-A-Pin and Sheamus, who has so little momentum he’s currently wrestling in prehistoric times? Of course not. New Day retains in the house showiest of house show matches, furthering their face turn and serving as this week’s third or possibly fifth reminder that nobody takes the League of Nations seriously.

Jessica Hudnall – Is this for real? King Barrett was cursed by a witch to never win a meaningful match seen by over six people, so I don’t know how this is even happening. New Day retains the belts and it’s a trombone party!

Austin Heiberg – Hahahahaha, oh man. That League of Nations… woof. Woodrow Wilson should come back from the dead and be like, “Guys, this is embarrassing. Get it together.” I got the New Day in a walk.

Justin Donaldson – I can’t imagine New Day heading into WrestleMania without the tag belts. And I can’t imagine any combination of League of Nations members that included Wade Barrett as the Tag Team champs. If this was Sheamus/Rusev, or maybe even Rusev/Del Rio, maybe this would be more of a toss up, but with this combo, I’m going with New Day all the way.

David D. – New Day loses here to set up a Mania match. I’m assuming WWE and Vince are going to be more hands-on with New Day now that they’re babyfaces and super popular. So, expect them to drop a topical Rapper’s Delight reference.

Danielle Matheson – The League of Nations tag team is so neutered and sad, like a basset hound who used to have “wears jeans and no shirt and punch I guess?” as a defining character trait. New Day forever, man. *waves unicorn rainbow sparkle flag* New Day forever.

What Should Happen: Hey, this is nice! Hopefully the WWE house show crowd knows what this is about and gives it the love it needs, and doesn’t hang it out to dry because they don’t recognize the teams.

Everything that’s been happening in NXT points to American Alpha winning the tag titles at TakeOver: Dallas, and as much as I like Enzo and Big Cass and want them to be successful, the timing just isn’t right. The Revival have always felt a bit like transitional champs, but they’ve done the Blake & Murphy thing where they have enough good matches during the transition to validate it. Is there a point in giving Enzo and Cass the tag titles finally, after all this time, just to have them lose them a few weeks later and get called up? Is the better idea to have them lose, have it break them a little and insert them into a Revival/American Alpha match in Dallas as the tweener team? I’m not sure, but the Revival should retain here. American Alpha would just MURDER Enzo and Cass.

What Will Happen: The logical part of my wrestling brain says they wouldn’t put an NXT match with championships on the line on a WWE main roster show if they weren’t going to switch the titles, but … yeah. It’s gotta be American Alpha unseating The Revival. The Vaudevillains and Enzo and Cass going nuts because they couldn’t get it done and having to watch these chummy smiley amateur wrestling dudes waltz in and easily destroy their blood rivals could be a really great story.

Jessica Hudnall – There’s no way I’m picking against Big Cass and Enzo “The Living Embodiment of the state of New Jersey” Amore here. I assume Cass just hucks Enzo at Dawson and Wilder until they simply can’t get up any more and or they have leopard pattern bruises on their torsos. Either way, brand new champeens, baybee.

Austin Heiberg – First of all, I’m super glad that the NXT guys are getting a showcase on a card that’s all main-roster stuff. That’s awesome. As for my pick, I’m usually the guy who says that no man or woman is bigger than the title they fight for, but Enzo and Cass are exceptions. They’ll be rock solid even if they don’t win, which is good, because I see The Revival keeping the titles until Chad Gable wristlocks them into a previously undiscovered dimension. Enzo and Cass will eventually be bulletproof on the main roster, which is why I’m okay with them not winning here.

Justin Donaldson – I LOVE ENZO AND CASS. But I’d like to see The Revival hold onto the belt, and that’s what I think is going to happen. Enzo and Cass are not one of those teams that need to have held the NXT tag belts. The Revival will once again defeat Enzo and Cass, but this time do it clean.

David D. – This has got to be the moment NXT pulls the trigger on Enzo and Cass. They’re going to be so over like Rover for a live WWE audience that they need to win the belts. All to set up American Alpha vs. Enzo and Cass at NXT Dallas.

Danielle Matheson – Just give it to Enzo and Cass. Come on, I want it do the thing. Everyone’s just keeping it warm for the American Alpha dudes, so just do the thing! 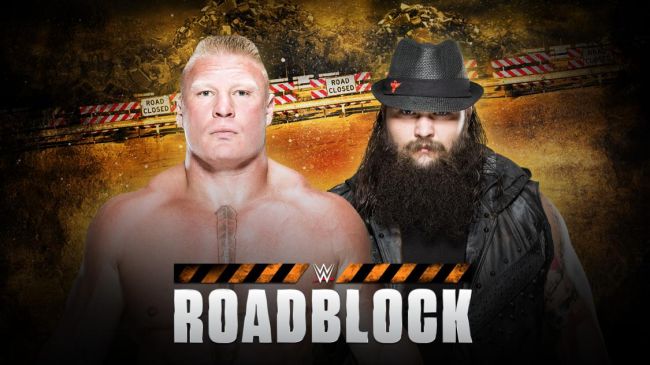 What Should Happen: Brock Lesnar should put all four members of the Wyatt Family on his shoulders at once and F-5 them so hard they fall through the ground and into the Springfield Mystery Spot.

What Will Happen: I swear, if this is another opportunity for the Wyatt Family to look strong by taking a DQ loss and beating someone up 4-on-1 to set up an actual loss later, I will … sigh, I won’t do anything. I’ll write wrestling jokes and try to be as affable as possible and hope maybe the Wyatt Family disappears from my brain Eternal Sunshine style at some point. Brock Lesnar is Brock Lesnar. Brock vs. Bray Wyatt should be over in like two minutes, even with three guys interfering.

Jessica Hudnall – If the Wyatt Family are somehow kept away from the ring, Brock should be gnawing on Bray’s ribcage inside of five minutes. If the Wyatt’s do get involved, it’ll be Rowan’s bones on the chopping block. Either way, someone is getting severely and thoroughly trucked by Beef Boy Brock.

Austin Heiberg – Bray is going to get rinsed here. At first, I was thinking that Rowan, Harper, and Strowman might be enough to even the playing field, but nah. A million years of erosion wouldn’t level this playing field. Brock is forever My Dude, and he should be Your Dude, as well.

Justin Donaldson – We should really start skipping these Bray Wyatt matches. The question isn’t whether Brock will win or not, it’s how bad will he decimate Bray and the entire Family. I’m going to go with under three minutes and eight German Suplexes.

David D. – The Wyatts are the new-age Undertaker’s Ministry without The Undertaker. So, they’re basically Mideon, Mabel and Gangrel. So yeah, they’re going to lose. Then WWE needs to spend a really long time figuring out how to make them viable again.

Danielle Matheson – There was a rumor going around that Bray is injured, so hopefully it’s just something minor and he’ll be back in time to have the demon inside of him suplexed back to hell. Or Florida. Whatever, same difference, right? Even if there are shenanigans, you gotta give this one to the hulking monster that lets them charge exorbitant amounts of money for live show tickets instead of…y’know, Bray Wyatt. Don’t even need a sad comparison for that one. Just Bray is fine.

What Should Happen: Man, how great would it be if WWE surprised us here, and changed the game for WrestleMania? What if Triple H vs. Roman Reigns and Dean Ambrose vs. Brock Lesnar were just placeholders to get us to a cooler, more unpredictable place, like Dean Ambrose vs. Roman Reigns vs. Brock Lesnar vs. Triple H? What if it’s just Ambrose vs. Reigns, and they capitalize on Roman’s milquetoast relationship with fans by pulling an Austin vs. Hart at WrestleMania 13? What if Roman leaves WrestleMania as a hated heel champion, and Dean Ambrose is suddenly the people’s champion for real? What if this has been the plan all along and they’re geniuses, and we’re all dumb as bricks and happy to be it?

What Will Happen: Triple H wins, and Dean Ambrose gets fridged to give Roman Reigns something people actually care about to fight for. I hope that’s not the case, but the hotness of an angle doesn’t always disqualify the obviousness of a plot point.

Jessica Hudnall – Triple H might be the Cerebral Assassin, but Dean Ambrose clearly doesn’t require higher brain functions to operate. A tough match up, but I just don’t see Triple H losing here, even if it is to Roman’s second best pal (The UPS delivery guy is just so dang charming).

Austin Heiberg – I’m begging them to shake it all up here. What better way for them to justifiably tell people “Hey, bet you feel pretty dumb for not having the WWE Network” than to have the title change hands on a Saturday night live show? Unfortunately, I don’t think that’s the world we’re living in. Dean will put up a great fight (he usually does when the chips are down), but Triple H retains and goes to ‘Mania as champion.

Justin Donaldson – If I had one sports entertainment wish right now, it’d be that Ambrose beats Triple H for the WWE World Heavyweight Championship and goes on to defend it in the main event at WrestleMania against Brock Lesnar. But the reality is, we’re not making it out of two WrestleManias in a row without Roman Reigns as champion. Ambrose wins via DQ when Lesnar interferes.

David D. – This is a shmoz. I don’t think Ambrose gets pinned here. Obviously Triple H doesn’t lose the belt. So, the Wyatts show up to interfere on Triple H’s behalf. Brock shows up to fight the Wyatts. They clear the ring and Roman returns to beat up Triple H. Crowd boos. And Vince McMahon becomes that dog meme where the house is burning and he says “everything is fine.”

Danielle Matheson – Do I want Little King Trashmouth going into ‘Mania as champion? Of course. Do I think it’ll happen? Naw. Do we think this is secretly just Triple H putting the fear in Dean and reminding him who wears denim and leather jackets better? I mean, yeah, of course.