Some Humble Suggestions For Future TV Shows From WWE Studios 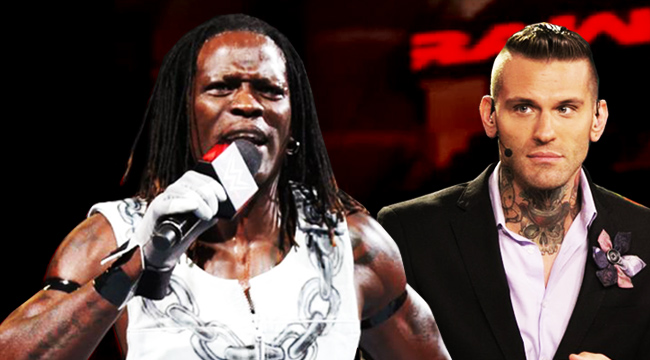 Have you heard? WWE Studios will expand into more television and digital content, which means all of you Rybacks out there looking to fill up on more wrestling-related shows have reason to celebrate. If you can’t get enough of The Marine or Total Bellas, then guess what, you’re gonna get a lot more where that came from.

The biggest bossman (Vince McMahon) put it this way:

“Given the size of our fan base and their appetite for WWE programming well beyond our core in-ring shows Monday Night Raw and SmackDown LIVE, this is the ideal time to further establish the WWE brand with new genres across platforms. WWE Studios is open for business with this new TV and digital initiative.”

The possibilities are endless, ya know? So we took to Twitter and asked the Internet Wrestling Community to pitch their ideas for WWE Studios productions they’d like to see.

Kofi Kingston and Xavier Woods travel the country to meet with WWE super fans to help them plan their very own WWE-themed wedding. Then Big E (who is actually ordained in real life) officiates the wedding.

(submitted by Dan “The Man” of Party World Rasslin’)

Hunter Hearst Helmsley is a high-powered business executive and 14-time world champion. Everything changes in an instant when a freak snowboarding accident leaves him with a torn quad and a trial separation from his wife Stephanie. Now, for the first time in years, neurotically uptight and work-obsessed Helmsley has to put his career on hold and move back into his summer home in Brooklyn Heights.

There’s just one problem: no one told him his three adult sons were already staying there! How will Hunter fare under the same roof as Randy, Seth and Big Kev (the angry one)? Will Hunter’s rowdy boys help their dad get his life back on track, or send him off the rails for good? Featuring William Regal as their butler, Stew.

Imagine every basic family comedy everywhere. Kid hijinks, annoying neighbors, a dog that gets into trouble, maybe some sort of Rube Goldberg machine, and some good PG family-friendly humor. But instead of Josh Lucas or John Kraczynski or Ed Helms or whatever, cast Bray Wyatt. And there’s no catch, he’s not secretly a serial killer or anything like that. He’s just Bray Wyatt. He looks exactly like that, all the time, and have him play the role completely 100 percent straight.

Instead of having matches on Raw, R-Truth comes out to the ring, and sits on a stool while Corey Graves pressures him to answer a question truthfully, or to engage in a dare in front of the audience and TV viewers.

An animated show (with live-action intros and outros) in which five female wrestlers are given cosmic powers to battle the forces of evil. Starring Sasha Banks (the glamorous leader), Bayley (the shy one), Becky Lynch (the funny one), Charlotte Flair (the athlete) and Asuka (the tough one). Their enemies are the bickering evil Queens of Day (Alexa Bliss) and Night (Paige). Offer Sasha a writing credit on this, since she’s probably already written this fanfic anyway.

Got a great idea for a WWE Studios show? Drop it in the comments and we’ll, like, totally make sure someone who works for WWE sees it.