Vacated titles present interesting challenges for the creatives who make WWE run. That’s because, for the most part, titles are vacated when champions get injured and have to forfeit the belts. Last week, Seth Rollins basically shattered his knee in a match with Kane, putting him out of action for months. This not only forced him to drop the belt, but it put WrestleMania’s card up in the air. While this seems dire, we have to remember that WWE seems to turn the chicken sh*t of circumstances into chicken salad more often than not.

Vince McMahon is, if nothing else, a man who’s at his best when his back is against the wall. These injuries and vacations presented dire moments that WWE had to respond to… and they responded well for the most part.

Andre the Giant defeated [name redacted] in a rematch of their WrestleMania III encounter, but this time it happened on Saturday Night’s Main-Event. The finish is all-time camp glory as there was a faulty count due to Ted DiBiase paying some guy to get his face to look just like Earl Hebner’s. The new fake plastic surgery ref counted the win for Andre the Giant. That’s right… we can’t get Kim Kardashian’s butt to look like a human’s, but DiBiase was able to get a guy a whole new face and fool everyone. Okay.

(In case you didn’t know, they just used Hebner’s twin brother to pull off the ruse.)

As a result, we had the WrestleMania IV tournament to crown a new champion. That champion was, of course, Macho Man Randy Savage. That WrestleMania is probably one of the worst ones, but it led to the Mega Powers story that defined the late ’80s.

Here’s something crazy: This story takes place two decades ago and it features The Undertaker. Undertaker defeated Hulk Hogan for the title at Survivor Series 1991 by nefarious means only for Hogan to regain the title by blinding the Dead Man with ashes from Paul Bearer’s urn. President Jack Tunney (who looks just like the scientist from Secret of the Ooze, I might add) stripped Hogan of the belt and put the title up for grabs at the Royal Rumble 1992.

Royal Rumble 1992 is the best Royal Rumble by a mile and is possibly the best hour-long thing to ever happen in WWE history. The match featured pretty much everyone who was ever anyone in the early ’90s. I really just want to write this whole section like Theo’s first draft of his paper on the March on Washington and just name all the names, but I’ll refrain. I bet even the most casual of WWE fans can name half the guys in this match. Also, as I’ve said before: This is the best commentated event of all-time. Bobby Heenan and Gorilla Monsoon made this match even better by adding comedy, gravity and organization to the chaos. Unfortunately, this match didn’t lead to the Hogan/Flair WrestleMania we thought it would. Still, the Rumble in 1992 was well worth the vacated title.

In the early ’90s, the WWF had to enforce a stricter drug policy and one of the casualties was Shawn Michaels. He’d failed a drug test and was suspended from the company. One problem: He held the WWF Intercontinental title. Tunney stripped Michaels of the title and held a battle royal to crown the new champ. The winner was Razor Ramon.

When Michaels returned to the WWF, he was still holding his original belt and calling himself the real Intercontinental Champion. So, it was decided that HBK and Razor would settle their disagreement with both belts hanging from the ceiling. The first man to climb a ladder to get to the belts wins. And the rest was history… a five-star classic that launched an iconic wrestling franchise and made Michaels and Razor big-time stars. Shout out to whoever snuck a Quaalude or whatever into Shawn’s rum and coke. 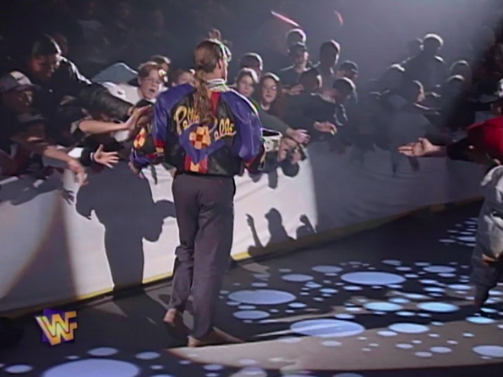 Shawn Michaels had to give up his Intercontinental title again after a real-life assault left him injured and concussed. I don’t remember or care what happened after this… I just want to point out this sweet ass Pelle Pelle jacket he wore when he gave up the belt.

After Shawn Michaels beat Bret Hart in an Iron Man match at WrestleMania XII, it was pretty much a foregone conclusion that they’d have a rematch at the next year’s event. There was a big problem, though. Bret Hart and Shawn Michaels hated each other’s guts. Depending on who you ask, Shawn Michaels either faked an injury so he wouldn’t have to lose to Bret at Mania, or he was legitimately hurt. Whatever the case, Michaels delivered his now-infamous “I lost my smile” speech and relinquished the belt. Aside: Can we find that woman in the Shawn Michaels regalia who was crying in the front row? You know who I’m talking about. If she wasn’t a WWF plant, I’ll eat my shoe. But we need to find her.

Anyway, with the title up for grabs and the WWF scrambling to reshuffle the deck mere months before Mania, they managed to put on a string of RAWs that were as good as any run in the show’s history. It was complete chaos. We had the Fatal Four Way at In Your House between Bret, Undertaker, Stone Cold and Vader. We had the cage match between Bret and Undertake with Austin swinging chairs outside to keep Bret from winning. We had Bret vs. Sid for the title and Austin cracking Bret’s head with a chair. It was magic. This is what I think about when I think of WWE clawing its way into a Monday Night War victory.

Okay, yeah, so WrestleMania 13 sucked. But thanks to Shawn not being in the event, we got arguably the best WrestleMania match of all-time with Bret Hart vs. Stone Cold in a no holds barred submission match that made Austin a household name.

Stone Cold Steve Austin was the Intercontinental Champion when he was gearing up to face Shawn Michaels at WrestleMania. However, the WWF brass didn’t want him to take the title to Mania, but they didn’t want him to lose. So, they had Austin vacate the belt because he refused to defend the title. Which is an odd way for the babyface to lose the belt. What resulted, though, was RAW magic. Austin had to reward the belt to The Rock, but he did it with a bit of theatrics.

Austin recorded a video of himself throwing the belt into a river only to reveal that the video was pre-taped. Then Austin scurried to a pay phone, put “3:16” in Rocky’s beeper and hit him with the Stunner. I don’t think that last sentence meant anything to anyone younger than, like, 28.

This is probably the most infamous “vacated title” storyline ever. Stone Cold Steve Austin lost his belt to Kane and Undertaker in a triple-threat match when they pinned him simultaneously. In return, he had to referee a one-on-one match between the brothers. That’s right, the most popular wrestler in the world spent a pay-per-view as a referee in the main-event. Instead of playing fair, Austin beat up both brothers, causing Vince to hold up the belt in a tournament to determine the new champion.

What happened next was an overbooked mess that encapsulated the insanity of the era… because it worked so perfectly. The tournament was really just a way for Vince to retreat the Montreal Screwjob in kayfabe a year after the real thing happened. The event, though, allowed for the company to essentially restart and boost a bunch of new storylines, including The Rock’s first title reign.

In 2007, John Cena was the alpha and omega in WWE. Then in a match with Mr. Kennedy, it all seemed to come to a halt. Cena tore his pectoral tendon on RAW because Mr. Kennedy is a reckless lunatic with a bad gimmick probably. The immediate result was Vince McMahon just giving the belt back to Randy Orton; they weren’t so creative in this era. But the long-term result was pretty spectacular for, like, two seconds.

Cena was supposed to be away for around nine months, but he made a surprise appearance at the Royal Rumble in Madison Square Garden and pulled every New Yorker’s b*tch card. New York is supposed to be the most diehard smarky place to do wrestling, but they all screamed like children when Cena’s music hit. It’s probably the biggest pop he’s ever gotten. Also, the fact he came in 30th on his return in what was supposed to be a randomized drawing is pretty convenient, isn’t it? Nobody brought it up… because John Cena is the original authority member.

The two seconds where Cena is standing in the entrance are amazing. Everything else — him winning, the WrestleMania main-event that came from it, everything else ever — all stunk.

In 2009, Batista tore his bicep in a match with Randy Orton. The result was a rushed four-way match on RAW that saw Orton win the belt back. Then we got a series of the most monotonous main-events WWE had seen since Triple H’s reign of terror in 2003. We got Orton vs. Triple H for two months that nobody cared about. Then we got the Orton vs. Cena rivalry gauntlet of every match imaginable: Hell in a Cell, I Quit, Iron Man, Dignity on a Pole, Partridge in a Pear Tree. All of it. It all was bad.

Thankfully, this was all during the Summer of Punk II, so we had something great to watch while all this terrible, boring wrestling was happening.

The true beauty, though, came after Batista got healthy and returned as one of the best heels in the business. His match with Cena at WrestleMania XXVI was low-key, one of Cena’s best, and a classic hoss battle. So, there’s at least that.