The UFC’s Embedded series is always an interesting look into the lives of top UFC fighters, but rarely do we get to see moments as real as the moment Daniel Cormier hears Jon Jones tested positive and is off UFC 200. In the latest Embedded, we get that, and it’s utterly heartbreaking.

Imagine being Dana White, telling a 37-year-old man with bad knees who works damn hard to make it to 205 that he’s lost out on his biggest payday ever, likely millions, because his greatest enemy and rival had a drug test come up positive. It’s because it’s Jon Jones, someone who he desperately wants to beat, that DC offers to do anything he can to keep the fight on:

“Is there anything I can do? I’ll sign a release and we can just fight.” 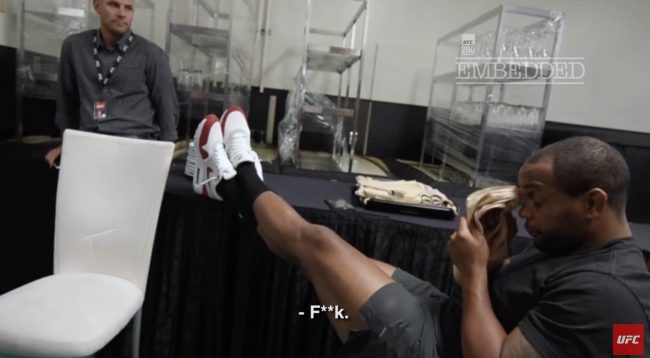 As of this writing, the UFC is currently looking for an extremely-late replacement for DC, with Anderson Silva being on the list to replace Jon Jones, as well as a handful of others. Hopefully something happens, Daniel Cormier stays on the biggest card in UFC history, and everyone gets paid, and gets to bask in some glory, because this was horrible to watch.