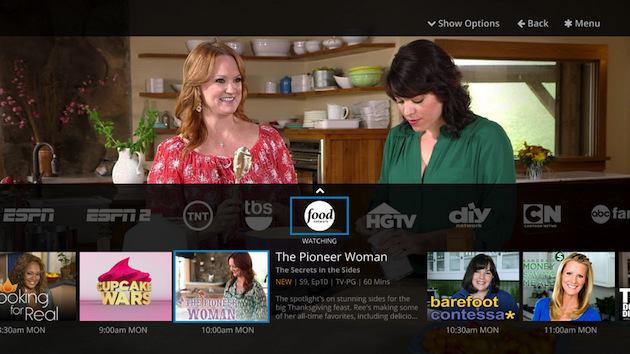 Dish Network has been gradually losing satellite subscribers (12,000 in the third quarter alone) as more and more people have cut the cord, making the transition away from cable and satellite television and toward Internet streaming media like Netflix, Hulu, and HBO Go. To try and balance these losses, Dish is launching a new Internet-based television service called Sling TV.

For $20 a month you can get access to a lineup of cable networks that includes TNT, TBS, CNN, Food Network, HGTV, Cartoon Network, Adult Swim, the Disney Channel, ESPN, and ESPN2.

A specific launch date has not yet been given for exactly when Sling TV will be available, but the service will work on such devices as Amazon Fire, Google Nexus, LG Smart TVs, iOS, Android, Roku, PCs, and Xbox.

I know what you’re thinking. Does this new service offer the consumer’s dream scenario of a al carte programming? No it does not. However, that’s not necessarily a bad thing according to Sling TV CEO Roger Lynch.

“The economics for it don’t really work out for programs,” said Lynch, while insisting it would wind up a bigger hassle than consumers would expect. Instead, Sling TV will allow you to pay extra for premium packages that offer more content than the $20 base package.

“You can construct a package that meets your needs rather than the traditional pay TV bundle of big, bigger, biggest.”

Two of those premium packages include Kids and News, which would each tack on $5 to the monthly $20 cost. As far as a la carte programming being a bigger hassle than the consumer might expect, I’d prefer an opportunity to at least try and prove him wrong in that regard.

The good news is that Sling TV will not require a contract, at least in the beginning. Like Netflix, they are allowing customers to cancel at any time. I’m beginning to wonder, however, at what point after adding the cost of high-speed internet will all the different monthly streaming services that people buy for all the different television content they enjoy watching (plus add-on costs for “premium packages”) will it just be easier to simply go back and pay for a cable or satellite bundle.

The market still seems to be finding its way with that question, but with Sling TV, Dish now has a complement to its satellite service, so perhaps it no longer matters to them. And maybe that’s the point.