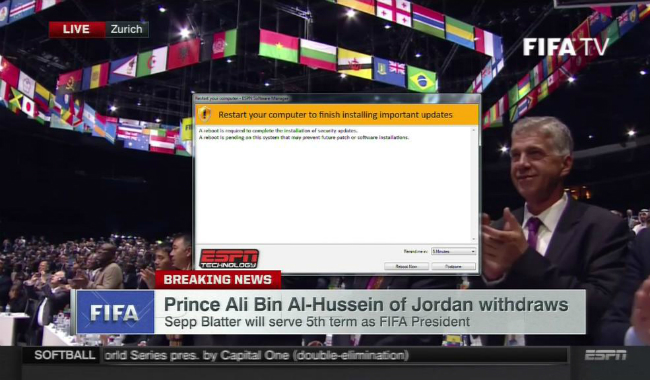 Despite the absolute crap hailstorm that’s been pounding FIFA this week, Sepp Blatter won his bid for re-election as FIFA president. It was the outcome that everyone predicted, considering that the inextricable web of corruption and bribery that’s nearly as synonymous with FIFA as soccer is still in place, with Blatter as its spider.

Out of the 209 delegations at the election, a super-majority of 140 votes was required for Blatter to defeat his Jordanian challenger Prince Ali bin Hussein outright. He fell seven votes short, but the second round of voting merely required a standard majority, and Prince Ali withdrew from the race when he realized he would never magically pull 30 extra votes out of thin air. It was still a long process, however — using hand-written and hand-counted ballots for some reason — so long that it rendered ESPN’s webcasting software obsolete. As Ali’s withdrawal was being announced, ESPN got a popup notification similar to the ones we all know and dread:

I love that even though the popup has the yellow exclamation point shield of Windows, ESPN still felt the need to add its branding to the most mundane places in its network… although, now that everyone can see it, you can argue that it was a good idea to stay on #brand in public.

Blatter’s reign as FIFA president will continue four more years at least, and though he claims to be the right man to root out the widespread corruption that’s finally being addressed by law enforcement, he’s been presiding over it all since 1998. All the bribes he’s paid and the allegiances he’s built over those times still hold more power over FIFA’s member nations than the threat that he’s a captain going down with a burning ship.