Tiffany Thompson is the girlfriend of Dallas Cowboys running back Ezekiel Elliott. She posted the above photoset to Instagram on Friday morning detailing how she was choked and thrown into walls, although she never explicitly says it was Elliott who did it. The photos have since been removed from her Instagram account.

However, TMZ is reporting that Elliott has been named a suspect in a domestic violence report, in which he denies any wrongdoing. He has not been arrested.

The female accuser filed a report with the Columbus PD in Ohio Friday morning … saying she was assaulted by Elliott — who she claims is her former live-in boyfriend — while sitting in the driver’s seat of her parked vehicle.

The officers who responded to the scene say the woman claims she had pain in her wrist and a red mark — but declined medical treatment.

Cops contacted Elliott — who denied striking the woman. He also said he never lived with her. 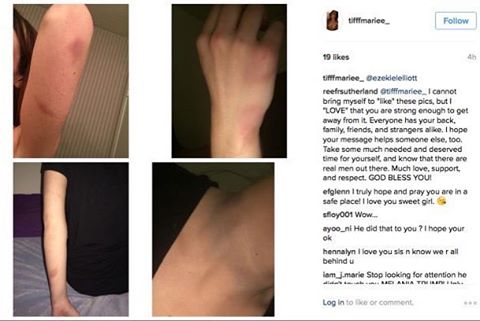 The Cowboys, who signed Greg Hardy last season, drafted Elliott with the fourth pick this year.

High-ranking #Cowboys source says that Ezekiel Elliott has messages saved on his phone proving his ex-girlfriend is trying to set him up.