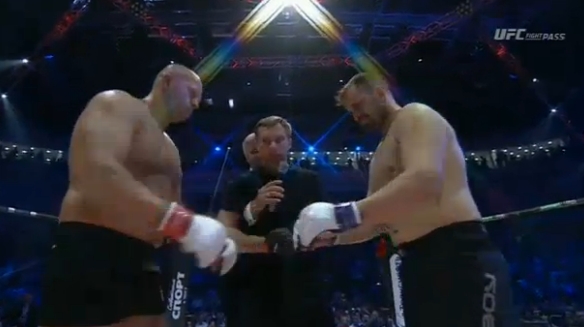 What the hell did we just watch? Friday on (shockingly) UFC Fight Pass, Fedor Emelianenko took on former UFC fighter Fabio Maldonado in the main event of EFN 50, which took place in St. Petersburg, Russia. Fedor’s entrance, as usual, was intense. The crowd had a mixture of overwhelming enthusiasm and reverent contemplation when The Last Emperor made his way to the cage. We’re on borrowed time with the GOAT now.

Fedor didn’t respect Fabio Maldonado. Emelianenko opened the fight with a prime-Fedor flurry, but looked gassed early. Then Fabio clocked Fedor and just dismantled him on the ground, arguably winning the first round 10-8. You could say that if Fedor wasn’t Fedor, and this fight wasn’t in Russia, Fedor would’ve lost in the first. When he finally – miraculously – made it to his feet, he was clearly fighting while half-conscious, at best.

Somehow, he survived the first, then looked better in the second, but still, Fabio hung in there. The third round had both men gassed, but make no mistake — this was Fabio Maldonado doing what Fabio does, which is to say he ate a bunch of punches, then zombie-walked forward. When all was said and done, they both went the distance, but neither man really had the strength to feign victory.

This is the second fight for Emelianenko after a three-year retirement. Fedor returned to MMA on New Year’s Eve 2015 in Saitama, Japan with a dominant victory over journeyman Jaideep Singh. It wasn’t the sexiest name to come back against, but a warm-up fight made sense for arguably the greatest fighter to ever live, especially with his 40th birthday rapidly approaching.

The commentators even discussed Fedor’s current negotiations with the UFC, which was surprising, to say the least. They said they hoped he would step into their cage, which means it must be close. But at nearly 40 years old, who would he fight? A Werdum or Bigfoot rematch? Barnett, finally?

Here are the full results from Friday’s six-hour EFN 50 event (via MMA Fighting):