Marshawn Lynch For President: Which Sportsperson Could Be The Leader Of The Free World?

This week, we received the exciting news that Dallas Mavericks owner Mark Cuban is going to play the President of the United States in Sharknado 3. This is brilliant casting because Cuban is a Shark and can therefore empathize with our new fish overlords, or whatever the plot of the new film will be.

Unfortunately, completion of the movie has been delayed by a strike, so while we wait for filming to restart we starting wondering, what sportspeople could actually be president in real life? The results:

When you really think about it, Dwayne Johnson is the closest we can get to a president like Dwayne Elizondo Mountain Dew Herbert Camacho without actually flirting with Idiocracy.

For both parties, The Rock is a Hollywood superstar that appeases every politician’s desire to be photographed with someone famous, so they can put it on their websites and tell people, “This famous person likes me!”

For Democrats, he’s a compassionate man with a remarkable ability to wow crowds with memorable and powerful speeches, even if he sometimes refers to female private parts as a pastry.

For Republicans, he’s a former actor who could kick Putin’s shirtless teeth down his bear-riding throat. He’s the perfect amalgam of what cable news tells us a president should be. If the entire Congress chants, “ROCKY! ROCKY! ROCKY!” at his State of the Union, he’ll fly on over to Pyongyang and tell Kim Jong-un how he’ll shine his rockets up real nice, turn them sumbitches sideways and stick ‘em straight up his candy ass! (He’ll probably call it Poontang, but people will forgive him because, come on, it’s The Rock.)

Also, when President The Rock vetoes something, he can do so with a clever catchphrase, and then the government can make T-shirts, sell them for $40 a pop, and the deficit would be cut in half within the first six months. It’s a win-win-win for everyone. ~ Ashley Burns

Just about every developed country (not to mention a few ass-backwards countries) in the world has had a female head of state at some point. America is waaaaay overdue. And who better to have in the White House than a woman who could actually whip Vlad Putin’s ass if it came down to it. All the shirtless photo-ops in the world can’t save you from a Rousey armbar, comrade. ~ Cajun Boy 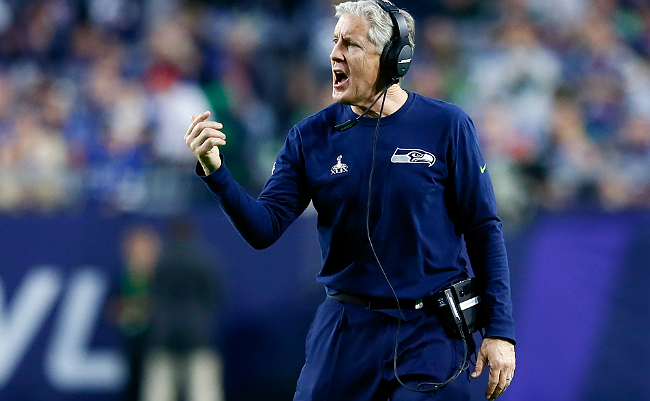 He’s got the enthusiasm and motivational chops to rally the country, and he knows how to build a successful team. Possible drawback: Even if winning a second term seems inevitable, he may decide not to run. ~ Ryan Perry

Dan Snyder is technically the owner of the Washington football franchise, but let’s be clear. This man is a politician. For proof, look no further than his handling of the Redskins team name.

Regardless of your feelings about the nickname, the way Snyder has framed his argument is exactly how a candidate would if he were in a race for office. He always stays on message, that the name is about “honor” and “respect” and “heritage,” and says things like, “We’ll never change the name. It’s that simple. NEVER — you can use caps.” He does not want to have an intelligent debate about a complicated topic, he wants to make this Us vs. Them. And it’s working, because the overwhelming majority agree with him, that the name should remain. Plus, Ari Fleischer and Lanny Davis are already part of his inner circle.

Now, enjoy your President Dan Snyder nightmares tonight, and don’t forget to send him that royalty check in the morning for using the team name in your unconscious mind. ~ Chris Mottram

Only a coddled AOL billionaire would ever run for president. He bribes bloggers, punches fans and implicitly compared himself to Martin Luther King, Jr. while adding corporate dingbat speak right before Black History Month ended.

He’s like a tame version of a GOP primary candidate. ~ Spencer Lund

I was 100 percent going to answer this question voting for Yasiel Puig before I realized he can’t be president because of that whole “natural-born citizen” clause. Thanks, high school U.S. Government class for watching my back. So, I guess I’ll go with Manning. No athlete save for maybe Derek Jeter over the past 20 years has been able to carefully navigate the landscape and be so popular for saying so little over a long and extended career.

Most people like Manning or have no opinion on Manning whatsoever, but he has just enough people who hate him to keep him from being too boring. He has shown some charisma and personality, especially in commercials and TV appearances, he’s extremely recognizable, and he has ties to really really rich dudes like Papa John and Jimmy Haslam, which means he can get his campaign funded. Plus, he’s got that SEC vote, and we all know how how important the South is in elections. ~ Martin Rickman

Aaaaaaaaand we’ve traded Michigan to Canada for 80,000 square miles of scenic, but undeveloped Canadian land. Lotta upside. Might turn into a ski vacation paradise 10-20 years down the road. ~ Danger Guerrero

1) State of the Union, five minutes max
2) Foreign diplomacy would start and end with “I’m all about that action, boss”
3) Casual Friday’s in the White House (as exemplified above)
4) Four words: Vice President Richard Sherman ~ Andy Isaac

Surely, we’ve missed dozens of candidates. Please share yours in the comments.