Yesterday the Pittsburgh Steelers, needing a solid backup QB, signed Michael Vick. Vick is years removed from the actions that put him behind bars, but that doesn’t mean that people are willing to forgive him. Legions of Steelers fans protested, and in true slacktivist fashion started a petition to remove him from the team within hours of the signing. It already has over 15K signatures.

Then comes today. It is #NationalDogDay, and considering Vick’s transgressions, it was sure to cause some fun. Well, sure enough, some protesters have gathered outside Steelers headquarters to protest the Michael Vick signing:

Via Jeremy Fowler of ESPN

Of course, bring the camera back a little, and the actual scope of the protest becomes clear: 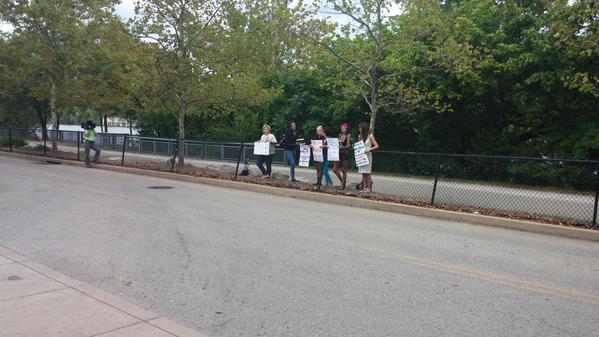 The ladies deserve some credit for actually having the conviction to stand there in the most pathetic excuse for a group. They already had far more conviction than the over 15 thousand people who merely signed a petition online that will result in absolutely nothing. I will also give the ladies credit for not being the typical Steelers hypocrite who wants Vick off the team but willingly roots for Ben Roethlisberger.

But really, at this point is Vick really worth a petition or protest? It’s been years, he’s paid his dues (more so than the average NFL criminal by far) and has shown humility and decent character since his release. You don’t have to forgive him for his actions, but he’s still more than just his one horrible mistake that he seems to genuinely regret.

Besides, he’s a backup. He won’t even see the field unless Big Ben gets hurt … so I guess he’ll see the field for a game or two now that I think about it.