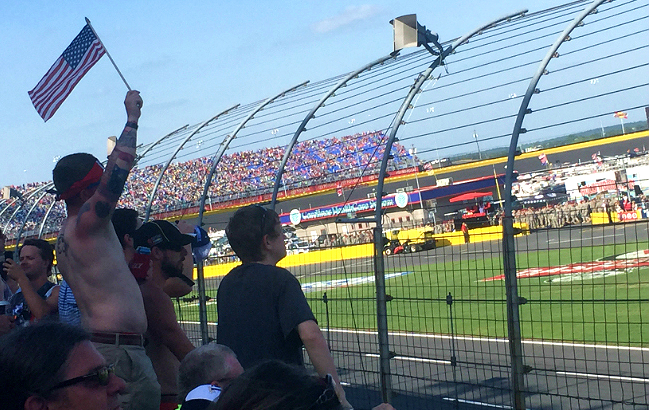 CHARLOTTE – It’s some point around Lap 39 on Sunday when I realize there are still more than 540 miles left of this race. The couple next to me has just grabbed some homemade chicken salad out of the sun-weathered orange Coleman they have to slide into the aisle every time anyone wants to walk by. They’re about to house an entire sleeve of Ritz crackers, and I’m noticing that the handful of Bojangles Chicken Supremes I ate about an hour ago aren’t exactly going to be enough food when there are more than 360 freaking laps remaining. This was such bad planning.

A row ahead, a guy who doesn’t look like he’s ever worn sunscreen in his life can barely open his eyes. He’s doing a shimmy shake dance, holding his fingers out in what appears to be a second cousin to Johnny Manziel’s money sign every time Jeff Gordon finishes a lap, or is shown on the video board, or if anyone mentions Gordon by name. About 50 feet to the right of me, two elderly women are wearing matching Nationwide hats, and although I observe they’re not smoking cigarettes because there are designated smoking patios at the race now, I still can’t help mentally placing cigarettes in their mouths whenever I look at them — it feels more natural that way.

We’re on another caution, and I’m suddenly well aware of just how little I know about this sport when I look up at the leaderboard and I’m not exactly sure who is winning.

I know Dale Earnhardt, Jr. drives No. 88 because everybody who lives in this state knows Dale Earnhardt, Jr. drives No. 88. Jimmie Johnson is easy too. My friend Robby Kalland agreed to be my guide for the day after driving up from Atlanta for the weekend. He has a Kyle Busch visor on with a picture of the Red M&M standing on the front of it, arms crossed, looking like he’s about to wreck somebody, so I put two and two together that Busch is sitting in the 18 car. There are a pair of real-deal Brad Keselowski fans in the first row losing their everloving minds any time he passes anyone, and they’re covered in the number two. And of course, there’s Gordon, who has just driven by, leading the guy right in front of me to elbow the guy next to him and point to his koozie, which naturally is camo-colored and has the number 24.

There’s some on-camera talent interviewing fans on the video board throughout the race, and one guy is holding up a pickled egg. This is the South, so the guy holding the mic can’t exactly say no when offered the egg although it’s clear he doesn’t want to eat it. He takes a bite and immediately looks like he’s going to throw that egg back up. The shirtless man who is revealed to have an entire bag of these purple monstrosities starts laughing, and although it’s hard to make out what he’s saying over the roar of engines, I’m about 95 percent sure he says “it takes a man’s man” to eat them.

The one thing I’ll say about this sport is there’s no elitism present in anything. It’s abundantly clear from my general demeanor that I have no idea what’s going on, but any time I explain my situation to a perfect stranger – “This is my second race ever; the first one was about eight years ago, also the Coca-Cola 600, but I had pit passes and we didn’t stay for the whole race” – there’s a head nod and a look of understanding.

“You’re going to have fun,” they’ll say. “But don’t forget to wear sunscreen.”

Luckily I had already been prepped for this thanks to Spencer Hall’s Talladega checklist and the fact that I’ve spent lots of time in my life getting sunburnt. I’m obsessively lathering myself up every 20 minutes or so like I’m a concerned parent taking my baby to the beach for the first time. I still wake up the next morning to find my head burnt – I never thought to rub the lotion into my scalp. Whoops.

People are generally about as nice as human beings can get at a race, especially out in the free parking lot which is just a giant gravel-filled field that on non-race weekends must resemble the world in that Talking Heads song “(Nothing But) Flowers.” I see a Florida Gators tent right next to a Seminoles tent, and the ‘Noles one has an Oregon flag. The college football fan in me is confused, but the general predilection I’m gathering is that none of this matters. In the hours before a race, no matter which driver you support (and even if you have a couple different decals on your car or flags flying), where you come from or who you are, it’s all going to be okay – it’s Memorial Day weekend, there are Stars and Stripes on everything, and people are just here to get sun, drink beer, yell a lot and watch people drive in circles for a few hours. 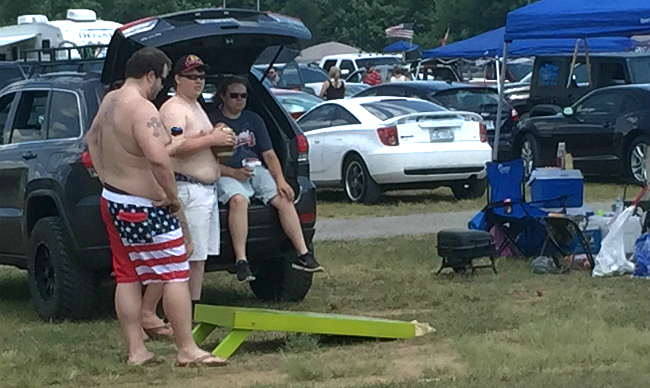 The people we park next to head into the race early and tell us we can use their canopy for shade but that if we’re going to take chairs out of their truck, just to kindly please put them back in the bed when we’re done.

A few guys across the way ask us if we want to play cornhole on their University of Georgia boards; we trot over and shake hands. The first gentleman in an N.C. State hat introduces himself as Hunter (and later tells me he’s at UNC-Charlotte to study Opera). The second guy who isn’t even playing against us also introduces himself as Hunter. I couldn’t tell you what the third guy’s name was now.

It’s about when Lee Greenwood has finished singing “God Bless The USA” and is starting a U-S-A chant that I start to consider doing this every year. The race still hasn’t actually started yet. Even after a finish that saw Carl Edwards (and others) play the long con, conserve fuel and basically glide into the finish on fumes despite Martin Truex, Jr. running an admirably fast race, I feel satiated.

There weren’t any big crashes, although Johnson slammed into the wall at one point leading he and his crew to have an exchange on the scanner where he joked that he might “still f*cking drive it” to which someone else responded “yeah, and you might blow a f*cking tire.”

This was the perfect thing to do on Memorial Day weekend. There are things I’d do differently – more water, bringing a cooler and food into the race, sitting a little further away from the track itself – but those are things I guess I’d have to learn over time. For a Northerner who knows nothing about racing, the idea of a day of sun, beer and people being nice to each other is plenty for me. That’s pretty much the only thing I want out of any day off from work.

Walking out of the track they are selling tickets to next year’s race, and as part of the promotion, you get a free gift. They’ve got all kinds of stuff, basically the things you find when you open a new checking account. I catch myself thinking I could use a new George Foreman grill. But I’m not about to walk all the way back to the free lot with it. Maybe next year.