Things are getting hot and heavy in the NFL here, ooooh baby things getting good. We’ve got three weeks left and the playoff picture is starting to take shape. The board is set, the pieces are moving, and many pawns are already dead. Currently eliminated from the playoffs:

The Patriots clinched a playoff berth, but don’t have the division yet, surprisingly. The Jets are keeping pace and keeping New England nervous. However, the Patriots are back in the hunt for the No. 1 seed, thanks to the Denver Broncos getting embarrassed at home, and the Bengals season going up in smoke with Andy Dalton’s thumb injury. The Poor Bengals. With Dalton’s thumb injury, they have to start A.J. “I think I’m worth a first round pick” McCarron. Now, there is a good chance the Bengals fall to the third or fourth seed (and possibly even lose the division to the red hot Steelers) and get ousted in the first round of the playoffs… again. At least this time it will be Andy Dalton’s fault for different reasons.

The NFC East is still a dumpster fire, but all three teams tied for first stayed that way with three victories this weekend. The Eagles held off the Bills, the Redskins held off the Bears, and the Giants held off the Dolphins. I say “held off” because saying any of these teams decisively won is giving this woeful division too much credit. The Cowboys got obliterated by the Packers, which should remove any hopes of them winning the division, even though they technically still can.

The teams to watch out for now are the Seahawks and the Steelers. Both have gotten hot at the right time. Russell Wilson is playing out of his mind and the Steelers passing offense might be the most frightening in the NFL. The Seahawks were dealt a major blow with the loss of running back Thomas Rawls, however, which might just keep them down. The Cardinals still have a strong grasp on the NFC West, so the Seahawks likely won’t have any home field advantage this year if they make it.

The NFC North is still the most exciting fight, with the Vikings and Packers still trading punches to get out front. The Vikings have suffered some big injuries lately, though, so they have the tougher road.

One last thing. The Panthers. They inch ever closer to being a word we are all afraid to whisper. Could they do it? Could they be the second team to ever go all the way? The second team in a decade to not lose during the regular season? The Panthers look fantastic and blew the woeful Falcons out of the sky 38-0. They look unstoppable. Cam is incredible. The final three games on the schedule? The Giants, the Falcons, and the Buccaneers. That’s a very winnable slate of games.

I got six games wrong this past week because I’m really bad at this, so here we go!

BROWNS
If the Browns win, I will draw Johnny Manziel as a gold prospector.

REDSKINS
If the Skins win, I will draw Captain Kirk Cousins punching a bear. 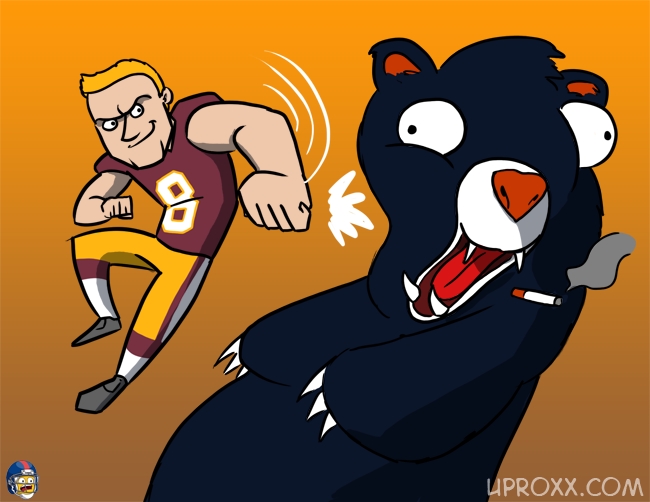 RAMS
If the Rams win, I will draw Jeff Fisher as a walrus. 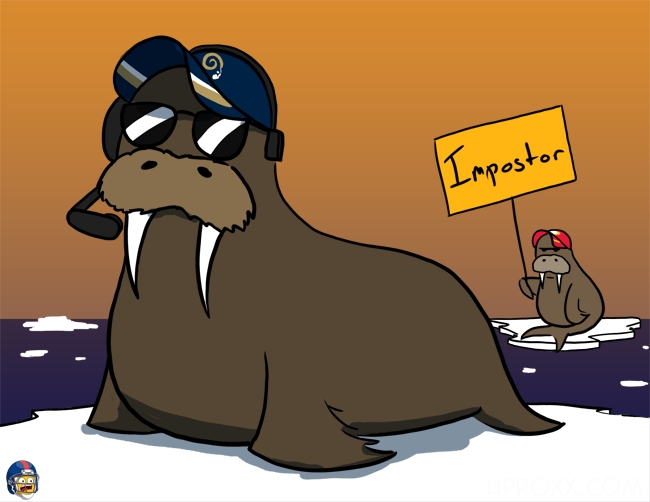 SAINTS
If the Saints win, I will draw stained-glass window Drew Brees. 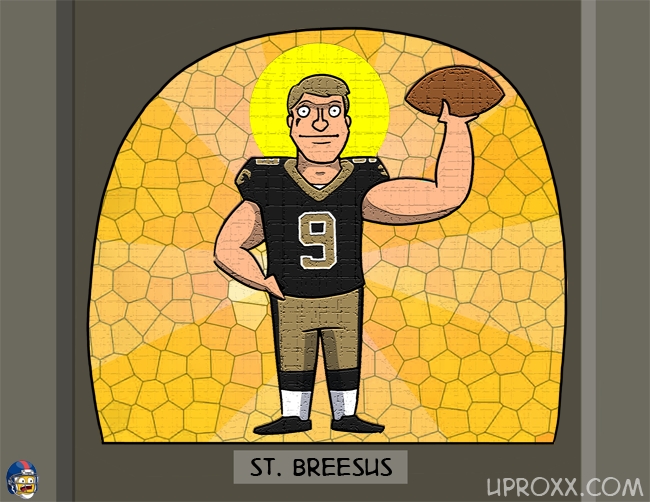 RAIDERS
If the Raiders win, I will draw Derek Carr marching with Brock’s head on a stick. (I changed this one around a little bit to better represent the game.) 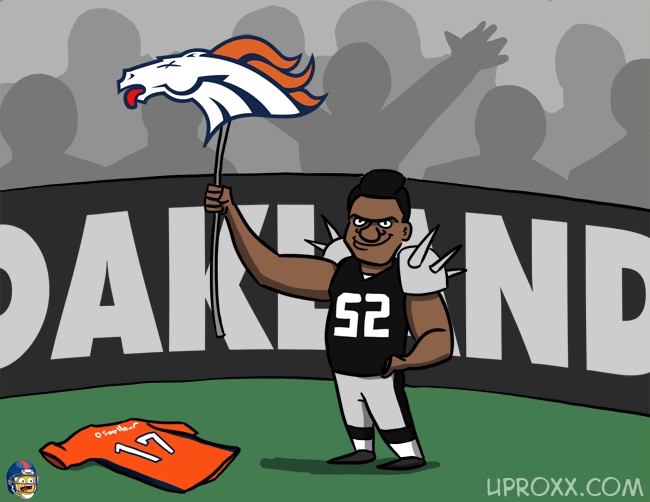 GIANTS
If the Giants win, I will draw Eli Manning enjoying the beach. 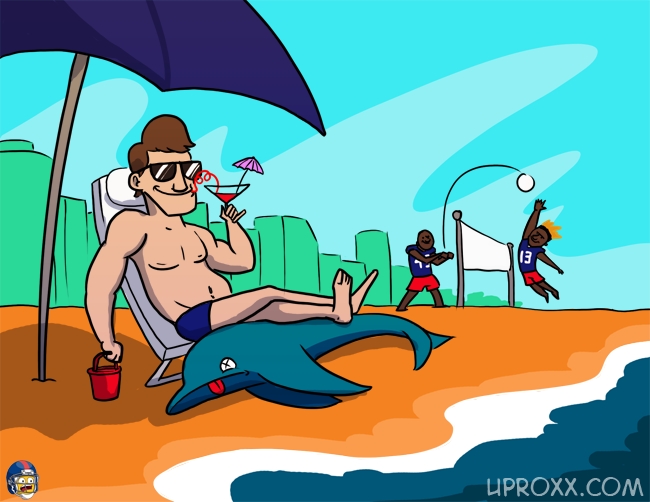 So, as things wind down, let’s look at our slate of games for Week 15!

BUCCANEERS @ RAMS
COLOR RUSH IS BACK. GET PUMPED! I know you aren’t. This week, the Ketchups take on the Mustards. The Mustards have this guy named Todd Gurley who seems pretty good at covering hot dogs, but he’s about all the Mustards have. The Ketchups are quietly having a solid year. While they aren’t quite a playoff threat, Winston and the Muscle Hamster have kept the Ketchups relevant and generally just feel like a better all-around team than the Mustards. If the Ketchups can stop Todd Gurley, the Rams won’t have much else to use, because it turns out Nick Foles sucks.
If the Mustards win, I will draw a Ram eating a hot dog with Ketchup Jameis Winston on it.

JETS @ COWBOYS
The Cowboys, at 4-9, still technically have a chance at the division. But they realistically don’t. The Jets are in playoff contention and the Cowboys are starting Matt Cassel. Ryan Fitzmagic is still looking good and Eric Decker/Brandon Marshall might be the best WR duo in the game.
If the Cowboys win, I will draw Matt Cassel standing on the wreckage of a jet fighter reaching for a balloon that says “playoffs.”

CHIEFS @ RAVENS
The setting is a dark hospital room. Jamaal Charles is lying in bed, after the surgery on his torn knee. The Chiefs are on the TV. He looks up, feeling sad he can’t be out there with his boys, but comforted knowing that they won’t do anything without him, because he was too valuable.
Then the Chiefs win seven games in a row.
If the Ravens win, I will draw Ryan Mallett (or Jimmy Clausen) dunking on Alex Smith.

TEXANS @ COLTS
Lost in all the laughing at the NFC East is the fact that the AFC South is also really, really terrible. The Titans are out of the playoffs, the Jaguars have five wins and just put a 50 burger on the Colts last week. The Texans are fighting for first and the Colts really do look terrible, but the Texans are simply forbidden by law to win in Indianapolis. On the plus side, Andre Johnson will finally know what it feels like to win a Texans/Colts game in Indy, so good for him.
If the Texans win, I will draw Andre Johnson crying.

TITANS @ PATRIOTS
lol
If the Titans win…nah, that won’t happen.

BILLS @ REDSKINS
The Bills are a Schrodinger’s football team. Are they good? Are they bad? They seem like they could be good. But they also seem really dumb and bad. I guess that means they are mediocre. So are the Redskins! This game will be incredibly boring.
If the Bills win, I will draw Rex Ryan doing the worm.

BEARS @ VIKINGS
The Bears are bearly scrapping by. It must be hard to bear for Chicago fans, to see their favorite team get laid bear week after week. The Fool’s Gould they have at kicker was their biggest asset, and now he’s broken forever. I bet Jay Cutler’s favorite band is The Bear-naked Ladies. Bears.
If the Bears win, I will draw The Bear-naked Ladies new album cover.

PANTHERS @ GIANTS
This is actually the Panthers toughest challenge remaining on the schedule. Yup. I imagine the Giants will actually look competent for a little while, maybe the first half, keeping pace and at least putting up a fight. Then it will all end in a fiery death.
If the Giants win, I will draw Eli licking a rocket pop saying “Nobody’s perfect!”

FALCONS @ JAGUARS
Earlier this year, I called for Gus Bradley’s head if the Jags couldn’t win several more games and compete for the playoffs. Well, Gus is making a case for being the Jaguars head coach in 2016. The Jaguars just shocked the Colts and are a team full of potential youth. This could be a good team next year, especially in that woeful division. The less said about the Falcons the better.
If the Falcons win, I will draw the Jaguars logo shedding a single tear.

PACKERS @ RAIDERS
Fat Mike McCarthy took back playcalling duties after watching the Packers fail miserably, and gave Fat Eddie Lacy the ball. The result was a glorious fat lead. The Pack is back. Sorry, Khalil Mack.
If the Raider win, I’ll draw Mack taking down the Pack.

BROWNS @ SEAHAWKS
Johnny Manziel did a thing! Believe it or not, Johnny has led the Browns to most of their wins this season (a low bar, but still). Of course, now he has to face the Seahawks defense instead of the 49ers wet fart. Did you see that one play against the Niners where Johnny ran left, threw back across his body like an idiot and got picked off? Yeah, the Seahawks won’t even let him get that far. I expect Michael Bennett to punch him in the face.
If the Browns win, I will draw Johnny Manziel peeing on the 12th man flag.

BENGALS @ 49ERS
The Bengals have a tough road ahead of them with A.J. McCarron in the drivers seat now. Thankfully his first full game will be against the woeful 49ers, and he can just sit back, relax, put on tapes of his Bama days and hand the ball off to Gio Bernard. I expect the Bengals to have no more than 15 passing attempts all game, and it’ll probably work.
If the 49ers win, I will draw Blaine the Pain Train kicking A.J. McCarron in the face.

BRONCOS @ STEELERS
The Broncos don’t have an offense. They have a really tall guy and a No. 1 WR who can’t hold onto a ball. They also have Vernon Davis, who straight-up dropped the Broncos’ best chance to win last week. The Broncos are treading water, and the Steelers are about to encase their feet in…well…steel. I’m sorry.
If the Broncos win, I will draw Dwayne the Brock Johnson beating up Big Ben.

DOLPHINS @ CHARGERS
This is the football equivalent of two legless squirrels trying to roll uphill to reach a rotten nut.
If the Chargers win, I will draw Philip Rivers doing a hoedown.

CARDINALS @ EAGLES
Last year, the Cardinals were really, really good until they got hurt. But the Eagles were one of the few teams who actually beat them during that stretch. With the Eagles we’ve been given this year, who knows what could happen.
If the Eagles win, I will draw Chip Kelly hanging up on LeSean McCoy.

LIONS @ SAINTS
I feel like the NFL is slowly trying to kill Monday Night Football with death by terrible schedule. Giants @ Dolphins and now Lions @ Saints in the final, most meaningful month of the season? Will anyone even watch this nightmare? The Lions are out of the playoffs, and the Saints only have the slightest chance at a wild card. This game is going to be a joke, and the punchline won’t be funny.
If the Lions win, I will draw Drew Brees being led into a retirement home.