After a Wild Card round full of upsets, with every single home team losing for the first time in history, the Divisional round saw only the home teams win, and for the first time we have two NFL Championship games featuring matchups between the No. 1 and No. 2 seeds. Basically, all the teams that got a bye week won, making the rest of the playoffs pointless. Hooray for parity!

Speaking of parity, the AFC has no idea what that means. Since 2001, Tom Brady’s first Super Bowl, the AFC representative in the Super Bowl has been Brady six times, Peyton three times, Roethlisberger three times, plus a Joe Flacco and a Rich Gannon for one time each. This year will add either another Brady or another Manning. So, in 14 years, we have basically only three quarterbacks. For comparison, in the same timeframe, no NFC QB has shown up more than twice (Eli, Wilson, Warner). The AFC needs to get itself together and actually try once in a while, like Flacco did. Thanks, Joe. You’re #elite to me.

The divisional weekend featured arguably the best football game of the season, too, with the Cardinals/Packers. It’s the kind of game that restores your faith in football. The game featured a ricochet tip drill go-ahead touchdown. It featured a final second hail mary for the ages. Then it featured one of the best overtime plays in history. It even had a goofy coin flip. The other games weren’t bad, either. Carolina stomped Seattle and then fell asleep in the locker room as Seattle did their best to make it interesting. The Steelers limped and the Broncos stumbled into a sort of interesting experience. The Patriots won, too, but they always win, they win so much they’ve made themselves completely boring.

Before we look at the two title games any closer, let’s see our results from last week!

If the Patriots win, I will draw Tom Brady as Kylo Ren and Belichick as Lord Snoke. 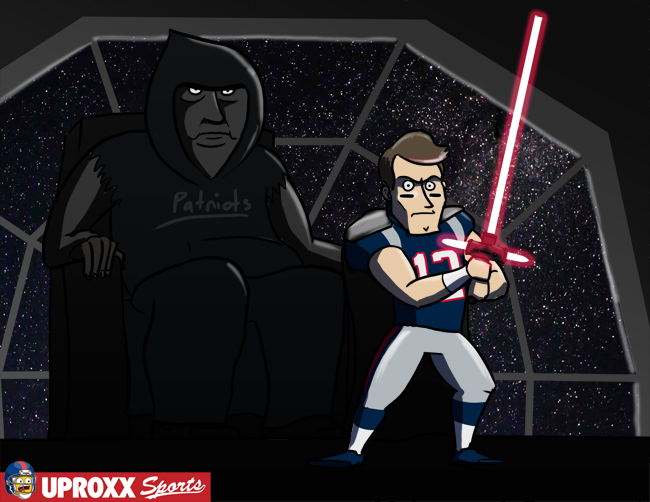 If the Cardinals win, I will draw Larry Fitz flying on a battle cardinal. 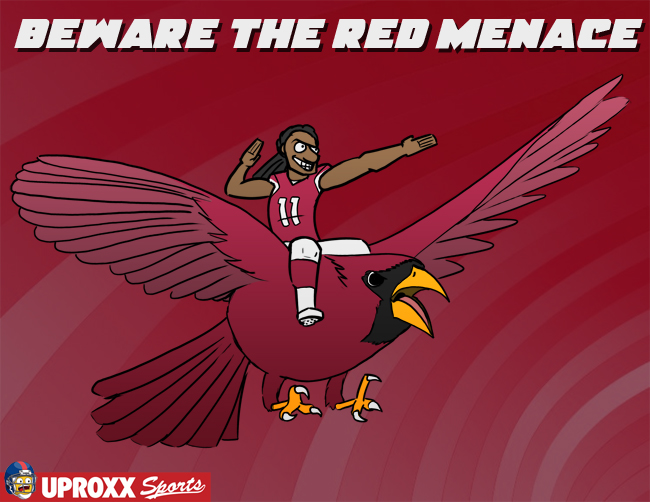 If the Panthers win, I will draw SuperCam. 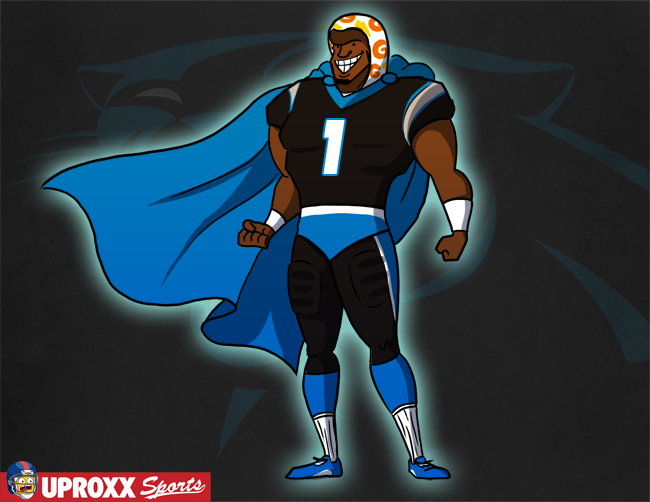 If the Broncos win, I will draw Von Miller and John Elway doing Von Miller’s sack dance. You know, the sexy one.

Now, onto the Championship round!

NEW ENGLAND PATRIOTS @ DENVER BRONCOS
This game is going to come down to if the Denver offense can be slightly above mediocre and actually score points. The Broncos defense will keep the Patriots honest, even with Julian Edelman back in the lineup. Brady will get some points, and Gronk will do his thing, but Denver is the best defense in the league and they can keep the Patriots to manageable levels. They already did it once. The problem is the Denver offense. Peyton is the definition of the mind being strong, but the flesh being weak. He’s physically toast. It doesn’t help that this past weekend against the Steelers featured numerous dropped passes. If Denver’s O can hold onto a ball and Peyton keeps the turnovers to a minimum, the Broncos can win this. In BRADY/PEYTON playoff matchups, the home team has always won. This is set up to be the first one to go the opposite way, but maybe the streak will hold. If you are as bored of the Patriots as I am, you hope so.

ARIZONA CARDINALS @ CAROLINA PANTHERS
If you told me this would be the matchup after the Cardinals/Packers game, I would have said the Panthers would easily run away with it. After the Seattle/Carolina game, I’m not so sure. Both of these teams had very questionable weekends. Carson Palmer did not have a good day against the Pack. His throws looked off. He had at least two major redzone interceptions dropped on top of the one that wasn’t. His game-winning touchdown was a fluke tip drill. He didn’t look like the Carson Palmer of this season, and you had to wonder if his thumb injury from late in the regular season is still affecting him. But he stuck through it thanks to a lot of help from Larry Fitzgerald and finally got that first playoff win. If he can get his nerves back to normal, he could beat the Panthers.

The Panthers should be happy, and also very nervous. They didn’t score a single point in the entire second half. They looked lazy and disinterested in covering anyone. Outside one brilliant sack by Josh Norman, the entire team seemed to just coast under the impression 31 points was too high a total to overcome. I guess they were proven right, but it’s been a disturbing trend this year for the Panthers. They let the Giants perform a 28-point comeback in the fourth quarter. They let the Colts come back and force overtime. They let the Packers come back. The Panthers are winning these games, but there is a penchant for slacking off this season. The Cardinals, if they are on, are the most dangerous offense in the game, and their coach is the kind of aggressive that “Riverboat Ron” no longer seems to be. The Panthers need to keep their foot down on the gas, because that’s when they are the best. This is going to be the game of the week, and I hope it lives up to its billing and we get an angry Cardinals fan letter to the editor about how shameful Cam Newton is.