Where Does Your Team’s Football Palace Fall In Our NFL Stadium Rankings?

Football stadiums are our own modern version of Rome’s Coliseum. There are fewer lions and not nearly as many pints of blood spilled, but they are basically the same thing. That said, not all stadiums are created equal. Some are glorious palaces to football’s honor, and others are depressing holes in the ground. It’s the doldrums of the NFL calendar, let’s arbitrarily decide which is which, shall we?

2. AT&T Stadium
Home of the Dallas Cowboys
The Jerry Dome gets a lot of flak for its grandiosity and being a giant monument to the ego of Jerry Jones, but the fact is despite all the jokes, AT&T really is impressive. Say what you want about the Cowboys, or Texas, or Jones himself, but if you are going to spend over a billion dollars on a stadium, this is pretty much exactly what you want it to look and feel like.

3. CenturyLink Field
Home of the Seattle Seahawks
The Link has a unique layout that gives it the classic silhouette of a stadium with some unique architectural stylings. It’s just pleasant to look at, and that design is perfect for reverberating noise. The giant overhangs keep the rain out of most fans’ faces in the wet northwest. Your tolerance of the local fanbase may vary, and the sheer number of “12” flags hanging around borders on obnoxious, but it’s still a glorious facility.

4. Arrowhead Stadium
Home of the Kansas City Chiefs
Gets points for not having a sponsored company name, because sponsor names almost always disappoint. Arrowhead is an old stadium that has the classic “giant bowl” shape that has gone missing in recent decades. It’s loud, very round, and just feels right.

5.  Lucas Oil Stadium
Home of the Indianapolis Colts
The house that Peyton built. Some people may hate this stadium based purely on how it looks, but honestly that’s what makes it great. It may look like a giant barn (or maybe like a big factory), but there are no other stadiums that have this style, and as far as barns go, it’s a pretty nice barn.

6. University of Phoenix Stadium
Home of the Arizona Cardinals
By this point, everyone knows about the cool retractable field thing, but it’s still pretty awesome. The interior is how a domed stadium should feel. The giant RED ZONE sign behind the endzone really brings it together. And it looks like a spaceship from the outside. 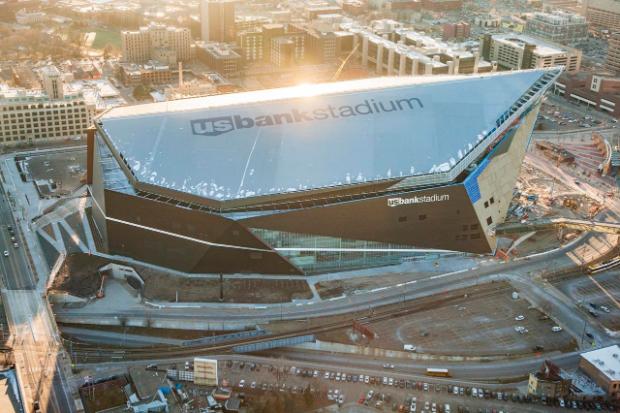 7. US Bank Stadium
Home of the Minnesota Vikings
The stadium might leave some locals with a bitter taste in their mouth considering how the owner held the city hostage in order to gather funds to build it, but at least the city is getting an A-plus stadium out of it. It looks like a giant glass Jawa Sandcrawler, and I mean that in the nicest way. This might be higher on the list once we get an actual game in it, but for now it’s simply one of the coolest to look at.

8. Heinz Field
Home of the Pittsburgh Steelers
The turf may be a giant quagmire of poor footing, but the stadium itself is a great football stadium. They went all-in on the yellow, which is a good thing. The yellow seats give it a bright, distinct look and character, and it has a fantastic view of downtown from the inside. Plus, I’m a sucker for spiral walkways.

9. LA Memorial Coliseum
Temporary home of the Los Angeles Rams
The Rams will be playing on USC’s field for the next three years as owner Stan Kroenke builds a new stadium in Inglewood. But for now, the Rams get to play in one of the America’s classic stadiums. Despite its age, the LA Coliseum is still better than most current stadiums simply because it is a college stadium, and college stadiums are just better than anything the NFL can offer. They have more history, and have a more classic look. There are no big luxury boxes in the Coliseum. It’s just a big bowl of football, as places where football are played should be.

10. Everbank Field
Home of the Jacksonville Jaguars
The Jags’ stadium doesn’t look particularly special, but it has a huge video board and gets into the Top 10 based solely on the stadium pools. Despite the murmurs about the Jags relocating due to attendance issues, the ownership has put a lot of work into making that stadium into something worth visiting.

11. Raymond James Stadium
Home of the Tampa Bay Buccaneers
Honestly the Ray Jay is pretty ugly. It’s a big angular mess of hard corners. However, all is forgiven because they have a freaking pirate ship in it.

12. Gillette Stadium
Home of the New England Patriots
Stuck in the middle of the woods, Gillette is a perfectly serviceable stadium. The only thing about it of any note whatsoever is the weird tower thing behind the one endzone. For a stadium called Gillette, it’s not the best a team can get.

13. M&T Bank Stadium
Home of the Baltimore Ravens
The purple seats are nice, the field is great, and the fans are good people (except if you like the Steelers). But the stadium is pretty bland and generic, which is only highlighted more by the fact that just across the street is Oriole Park at Camden Yards, possibly the best stadium in all of sports.

14. Lincoln Financial Field
Home of the Philadelphia Eagles
It’s a huge step up from the jail cell that was The Vet. The Linc is a perfect example of just a solid, even stadium. It’s nothing special, especially to look at, and that’s why it’s sitting right around the middle of the rankings.

15. Bank of America Stadium
Home of the Carolina Panthers
B of A stadium has a nice big entrance flanked by huge panther statues, and a view of Uptown Charlotte, but it isn’t terribly remarkable architecturally. It’s a football stadium, that’s for sure, but it isn’t much else.

16. Sports Authority Field at Mile High
Home of the Denver Broncos
Some might rank this one higher, but the weird undulating wave-looking top sections leave me with a vague feeling of discomfort. Can’t explain why. Also, that name is just terrible.

17. First Energy Stadium
Home of the Cleveland Browns
This stadium is best known for being the factory of sadness that is the home of the Browns, and the stadium itself reflects the below averageness of the product on the field. It’s just sort of… there.

18. The Superdome
Home of the New Orleans Saints
It has a great name, but from the outside, it looks like a big white pimple, or the world’s most boring spaceship. The inside is nicer and it has a great roof, when the power manages to stay on.

19. NRG Stadium
Home of the Houston Texans
Formerly known as Reliant Stadium (a much better name), NRG is kind of a mishmash of styles and doesn’t feel like it has its own identity. I could totally see the designers in a meeting pitching a bunch of ideas and just deciding to incorporate all of them instead of picking one angle and pushing it.

20. Nissan Stadium
Home of the Tennessee Titans
As bland and forgettable as the team it houses.

21. Levi’s Stadium
Home of the Santa Clara 49ers
Levi’s Stadium was built for the stereotypical silicon valley tech CEOs, and boy does it look like it. One entire side is luxury boxes, and the other side, where the common filth sit, bakes in the sun. But it has wifi and a garden up top! If this stadium was a car, it would be a Tesla, driven by a trust fund baby. Oh wait, I just described Jed York.

22. Paul Brown Stadium
Home of the Cincinnati Bengals
It’s there. It exists. And the big overhangs on the sides make it look vaguely like a lesser version of Seattle’s Clink.

23. Ford Field
Home of the Detroit Lions
The inside is nice, but the outside looks like a big corporate office building.

25. MetLife Stadium
Home of the New York Giants & Jets
If AT&T Stadium is what happens when a billion dollars is spent right, then MetLife is what happens when you waste it. It looks like a giant unfinished air conditioner. This is the most expensive stadium ever built, and you could swear they went with the cheapest designer they could find. Look at it. It’s so bland it hurts. It’s not even fun ugly like the Dolphins’ stadium will be; it’s just straight boring. There is no character. Plain and simple, it is a waste of a billion dollars. 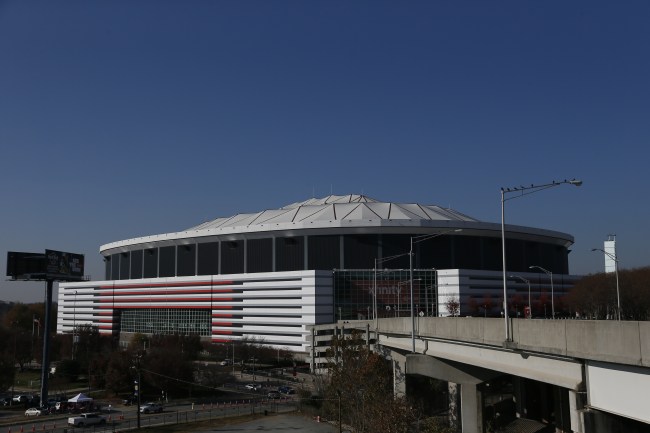 26. Georgia Dome
Home of the Atlanta Falcons
The Falcons should have a spiffy new stadium next season. But this is 2016, and that means we get one more year in this stinker.

27. Ralph Wilson Stadium
Home of the Buffalo Bills
Even though The Ralph has gotten some upgrades in recent years, that won’t change the fact that it’s a big concrete hole in the ground. It’s a dump, but Bills fans probably wouldn’t have it any other way. It’s the perfect complement to those tailgating fans powerbombing other fans through tables and getting aggressively drunk.

28. FedEx Field
Home of the Washington Football Team
Skins fans are some of the most loyal in the NFL, yet they keep having to remove seats so that they can sell out the stadium that is horribly situated in Landover, Maryland. That should say it all.

30. Qualcomm Stadium
Home of the San Diego Chargers
Qualcomm has been slowly coming apart at the seams for about a decade. The outside looks like the internal frame of an unfinished, better stadium. Qualcomm should have been replaced a long time ago, but for a myriad of reasons, the Chargers will continue to call this dump home (for the time being).

31. Oakland Coliseum
Home of the Oakland Raiders & the Oakland Athletics
The only stadium left on this list that still has a baseball team play in it, the O.co is a depressing relic. The sewage backs up on a routine basis. Both of these teams desperately need something new, but for now, they’re stuck in this pile of filth.