A slow NFL news day was interrupted on Tuesday when the league’s Twitter account posted an update claiming that Commissioner Roger Goodell was dead at age 57. 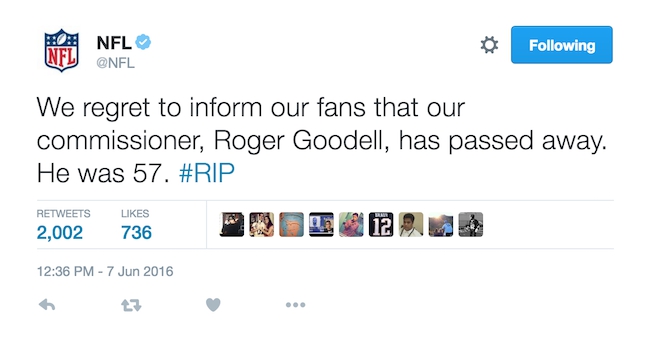 Obviously, the tweet was immediately speculated to be the result of a hack. That theory would prove to be correct, as the NFL’s head of PR sent this update shortly after.

As you’d expect, the original tweet was quickly deleted. But if you suspected that would be the end of it, you would be wrong! This hacker didn’t give up so easily. After the original was taken down, this update was posted.

The NFL even took long enough to change their password for a third tweet to be sent!

The hero then seemingly threw in the towel and called it a day, but he/she had already done enough to send the rest of the internet into a frenzy.

Someone updated Roger Goodell's Wikipedia page with the date of his "death" — with an important distinction. pic.twitter.com/lj1eC1oh5W

Took Jesus 3 day's to come back from the dead. Only took Goodell 3 minutes

“Based on the Twitter handle, the tweet and the blue check mark, I’m going to say that Roger Goodell is indeed dead" pic.twitter.com/99yTlCtAfN