Illustrating The Most Surprising Winners From NFL Week 5 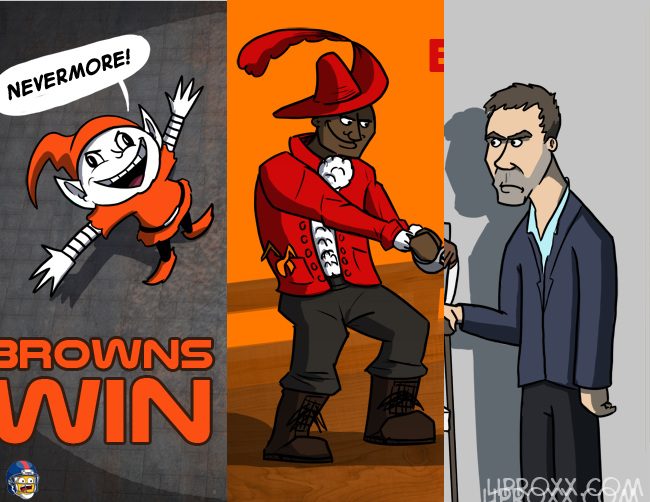 NFL Week 5 was an astounding week of football filled with a lot of almost upsets. The Washington Redskins almost managed to take down the undefeated Atlanta Falcons, only to be undone in the end by the already classic Kirk Cousins interception. The Eagles managed to right the ship and look like the team everyone expected against the lowly Saints. The Seahawks looked like the champs of old, only to fall apart completely in the fourth quarter to the Bengals. The Browns secured a win over the Ravens, in Baltimore, with the help of Gary Barnidge’s buttcatch. The Giants finally managed to be on the good side of a late fourth-quarter comeback after a miracle two-minute drill ending with a stellar Larry Donnell catch. The Steelers also managed a late-game comeback with a walk-off touchdown.

Also the Patriots and Packers won because of course they did. The Broncos won despite Peyton Manning having the arm strength of a newborn baby. The Bears came back after Jamaal Charles tore his ACL (dooming millions of FanDuel and DraftKing players’ hopes in the process, I’d imagine).

Despite several scares and three overtime games, my picks from last week were mostly accurate, with only four games chosen wrong. That puts me at 10-4 for the week, and 54-25 on the year. As always, here are the losers, illustrated:

If the Bears win, I will draw Jay Cutler dangling BBQ over Andy Reid’s head. 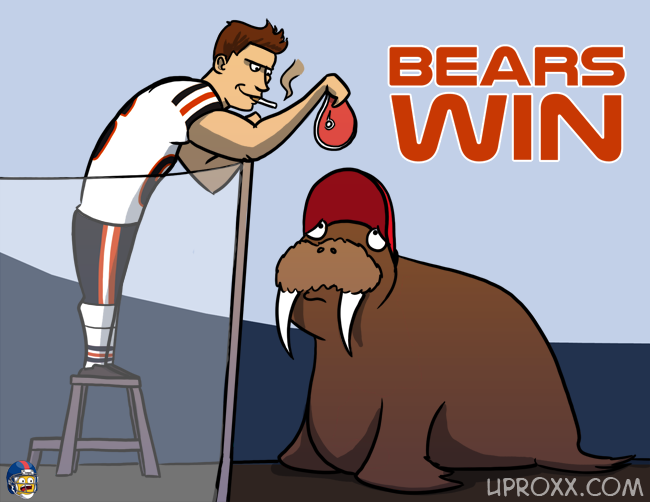 If the Bucs win, I will draw Jameis Winston as a pirate slicing off Shahid Khan’s mustache. 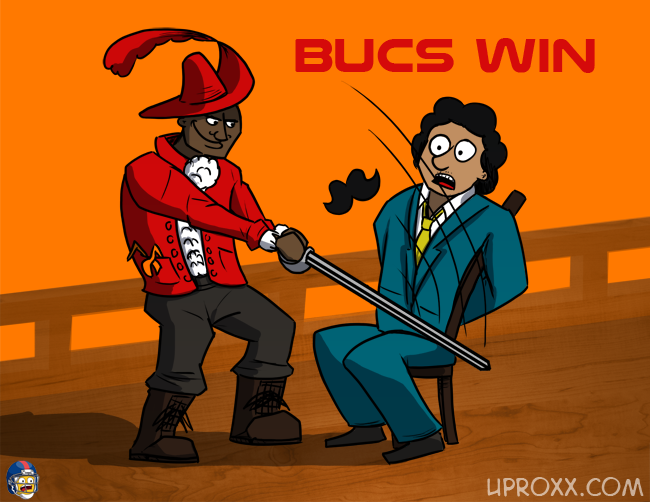 If the Browns win, I will draw the Brownie tying the Raven down to a table with a pendulum swinging over it and the Brownie laughing “nevermore.” 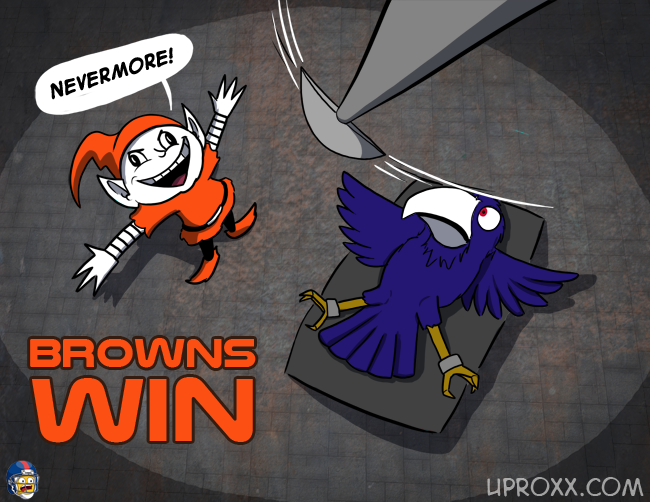 If the Steelers win, I will draw Mike Tomlin talking to Dr. House as Philip Rivers lies dead in the hospital bed. 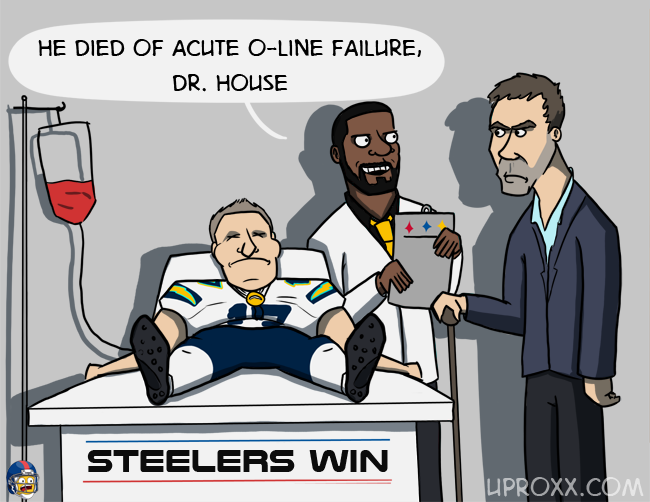 Also, despite the Raiders losing, I still did my promised picture of Lady and the Tramp, because it was too good an idea to not make anyway.

So, what do we have on the slate this week, and what terrible concoctions will I have to cartoon in its aftermath? Let’s take a look at our schedule and make some picks:

FALCONS @ SAINTS
If the Saints were a public bathroom, they’d be that one bathroom at the train station with no seat, god knows what on the walls and floor, swastikas etched into the walls, spiders, used feminine products in the trash, and hypodermic needles strewn about. The kind of bathroom that makes a person decide to pee in the corner of the station instead.
If the Saints win, I will draw Rob Ryan as Fabio.

REDSKINS @ JETS
The Skins have proven themselves to be an actual legitimate football team instead of a tire fire, but Captain Kirk may not have the right stuff to get past that Jets defense.
If the Redskins win, I will draw the Starship Enterprise shooting a jet fighter out of the sky.

CARDINALS @ STEELERS
The Cardinals are on a roll. They get to face Michael Vick and the distressing Steelers “secondary.”
If the Steelers win, I will draw Ben Roethlisberger punting a cardinal.

CHIEFS @ VIKINGS
The Vikings might be the most boring team in football, but they are going against a now useless Chiefs offense. I mean really, do they even have to try and sell out on the run anymore with Charles gone? Well, they can still stack the box, because Alex Smith can’t throw five yards downfield.
If the Chiefs win, I will draw Alex Smith shooting holes in the Vikings boat causing it to sink.

BENGALS @ BILLS
Andy Dalton continues to get away with these afternoon games, so he still hasn’t been exposed for the fraud we all expect him to be. He can’t keep looking like an MVP, can he? Is Andy Dalton an elite QB? I don’t know if I’m ready for that.
If the Bills win, I will draw a Rex Ryan-ridden Buffalo stampeding over Andy Dalton.

BEARS @ LIONS
I’m going to do it. I’m going to call this as the Lions’ first victory. The Bears do not have my confidence at all, and the Lions are at home. This game is between two terrible teams, so it should actually be hilarious.
If the Bears win, I’ll draw Jay Cutler as Optimus Prime not giving a sh*t as Megatron cries.

BRONCOS @ BROWNS
The Broncos have gone 5-0 against very bad competition thus far. Josh McCown has thrown for insane yardage, but not against this defense. Peyton Manning and his fetus arm gets bailed out by the defense again.
If the Browns win, I’ll draw The Brownie grabbing a shotgun and taking horse John Elway behind the shed.

TEXANS @ JAGUARS
The Texans are so bad. The Jaguars are so bad. I’m convinced Gus Bradley should be fired. One of these teams actually has to win this game. This game is going to be the football equivalent of a 0-0 soccer tie. So, like a 6-3 puntfest.
If the Jaguars win, I will draw Blake Bortles punching the state of Texas.

DOLPHINS @ TITANS
Mariota’s Titans are very flawed, but they get to face a panicked Dolphins team with their first game under an interim head coach mid-season.
If the Dolphins win, I will draw a dolphin surfing on Mariota.

PANTHERS @ SEAHAWKS
Something is wrong with the Seahawks. Very wrong. Besides the existence of fan selfies called “twelfies.” But the Hawks are at home where the refs are too afraid to call penalties on them, and the 4-0 Panthers have only reached 4-0 by beating up sad-sack teams (Texans, Bucs, Saints, Jags).
If the Panthers win, I will draw Cam Newton playing the drums on Wilson, Sherman, and Pete Carroll’s heads.

CHARGERS @ PACKERS
The only question is how many Chargers offensive line injuries happen during the loss.
If the Chargers win, I will draw Philip Rivers as Cyclops from X-Men laser-facing Aaron Rodgers.

RAVENS @ 49ERS
This is like watching a boxing rematch between two former contending champions, but now they are both old, broken, and fighting in an alley for booze money.
If the Ravens win, I will draw Joe Flacco giving Kaep a tattoo on his butt that says #noteli7e.

PATRIOTS @ COLTS
Deflategate revenge game. This will be the football equivalent of Hiroshima on Indianapolis.
The Colts are not going to win.

GIANTS @ EAGLES
Last year, the Giants were 3-2 going into Philly looking good. Then they lost 27-0, Victor Cruz hasn’t seen the field since, and I was very sad. I will not go into this game with any expectations whatsoever.
If the Giants win, I will draw Eli Manning as a derpy Super Saiyan.

See the illustrations from previous weeks!