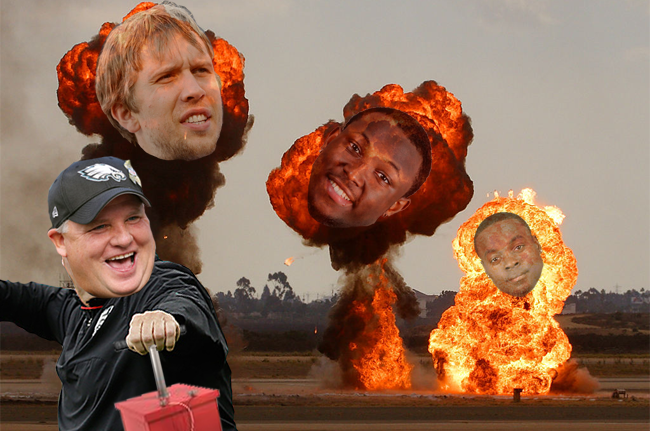 Last year: 10-6, second in the NFC East, missed playoffs due to Sanchez remembering he was Sanchez and going full Sanchez.

Okay, now that’s out of the way. No offseason has caused more heads to be scratched until bleeding than whatever the hell Chip Kelly is doing in Philly. Chip was given personnel control and then proceeded to plant C4 on the expectations of Eagles fans. Many have drank the Kool-Aid smoothie, giving themselves wholeheartedly to the cause and convinced themselves that Kelly is secretly a genius. Others have given up completely, the team they loved for years casually destroyed in seconds and now think Chip is going to crash and burn.

As a Giants fan, I fear the former, and hope for the latter. Honestly, it’s hard to talk about the Eagles expectations because the team has gone in such a weird direction. At the very minimum, I think it’s going to be extremely entertaining. It would appear certain Eagles fans agree.

Vegas put the over/under on total wins at 9.5.

Verdict: Put your hard-earned money back in your pocket and do not for a second even think about betting on this crazy, insane team, you dumbass.

Anyone who tells you that they know how this Eagles season is going to pan out is a filthy, dirty liar. Even before we stumbled in on Chip Kelly slathered in shabbily applied clown makeup, cackling maniacally while setting fire to the Eagles roster, the Eagles season was teetering on a precipice coyote and roadrunner style, over the edge of a canyon of “what ifs?”

The two targets of our massive offseason trades, Sam Bradford and Kiko Alonso’s knees, could single-handedly send this team plummeting to its death, and that’s before we even get into whether DeMeco Ryans is going to spontaneously combust or not, and the fact that we’re going into the season with No. 1 wide receiver Riley Coo… Riley Ccc… *gags slightly*… I’m sorry, Riley Coop-aughh… *splutters audibly*… I’m, sorry, I can’t bring myself to say it. Anyway, so, basically, now we play the waiting game to see whether Chip can blend up enough smoothies to flood that whole canyon in time to break everyone’s fall and hopefully wind the Eagles’ Doomsday Clock (also known as Sanchez/Tebow Time) a couple of minutes back from midnight.

I mean sure, maybe… MAYBE all of the knees/ligaments on the roster will magically hold out, and we won’t have to be subjected to the hilarious dumpster that is our QB depth chart. Honestly, though, as an Eagles fan, do you really think you deserve that? Do you really believe that magical, sparkly unicorn luck is going to somehow come true for us? Of course not, you battery-throwing, snowball-hucking degenerate.

Sam Bradford’s knees are going to catch fire and explode into a million pieces before Kenny Chesney and Riley Cooper are even done belting out the national anthem at the Eagles home opener, and Jesus, Buddha and Yoda are going to be looking down from the sky in a soft blue glow, nodding sagely and muttering something something, “A total b*tch, Karma is. Hmmmmm yes.” Trust me, you’re better off expecting the absolute worst and making peace with that reality so that you can point and laugh at the sh*tshow that’s going to unfold in front of us and actually enjoy it.

I mean, do you remember what division the Eagles play in? Clownball Central, also known as the NFC East. Tim Tebow and Mark Sanchez orchestrating Chip Kelly’s crazy offense in the Yakety Sax bowl six times a year is going to be like backing up a dumptruck of Mentos into lake Diet Coke. It’s going to be Shakespeare.

If you’re not ready to embrace the hell out of that, then you’re probably one of those awful people who’d rather watch Casablanca than Dumb and Dumber. In which case: F*ck you.

So, the only thing I can tell you for sure is that Chip Kelly’s Eagles are going to be the absolute best team in the league to watch… so long as you’re not interested in winning it all. Why? Because Chip Kelly doesn’t want to win the regular way, like all the rest of those other chumps. Chip’s playing on expert with one arm tied behind his back. Last year, the Eagles gave up more 20+ yard plays AND more 40+ yard plays than anyone else in the league. You want to know what else? They gave the ball away more than anyone else in the entire league, as well. And STILL WON 10 GAMES. How does that even make sense?!

Needless to say, Chip likes a challenge. Best running back in the league? Nah. I don’t need that. Best rated guard in the league? See ya. Best slot corner? psshht. Oh yeah, a QB who had one of the best statistical seasons ever? LOL, what if I flipped him for the guy who’s been out for two years? DeSean Jackson… actually, no, wait, F*CK DeSean Jackson, that one I can get behind. But you know what? That guy who’s the biggest running joke in the league? No, not Tebow, the other one, haha yeah, the buttfumble guy. Get me the buttfumble guy… Actually, lol screw it, okay. Get me Tebow, too.

So, wait for Chip to try and get a playoff win with Tebow under his belt, and then keep an eye out next year for when he recruits little Suzie from the Make-A-Wish Foundation with Stage II Leukemia, puts her under center in 2016 and rides her to a Super Bowl.