On April 9, Manny Pacquiao will step into the ring against a TBA opponent for what is widely believed to be the final fight of his career. That night will be the culmination of a whirlwind career for the Filipino superstar, starting way back in 1995 and transcending the sport he calls home. Today, Manny turns 37 years old, so to celebrate, here are 37 reasons why we love the fighter known as Pacman.

Manny wrote in his biography that he ran away from home in anger after his dad killed and ate his dog. That drove him to Manila and boxing.

There is some debate here. Freddie Roach has said he turned pro at 14, and others have said 17. The BoxRec records say 16. Either way, fighting adults, professionally, at any age under 18 is badass.

3. He Stuffed Rocks In His Pockets To Make Weight

In fact, whatever age Manny was, he was still tiny. So small, in fact, that legend has it he’d secretly stuff rocks into his pockets during weigh-ins just to make the minimum weight limit of 105 pounds.

4. He Once Did This To Antonio Margarito’s Eye

5. The Sh*t-Eating Grin During This Entrance

6. Before He Landed This Punch

7. Which Is Even Better In Slow Motion

8. And Made For Some Amazing Photos

9. His Incredible Sense Of Timing 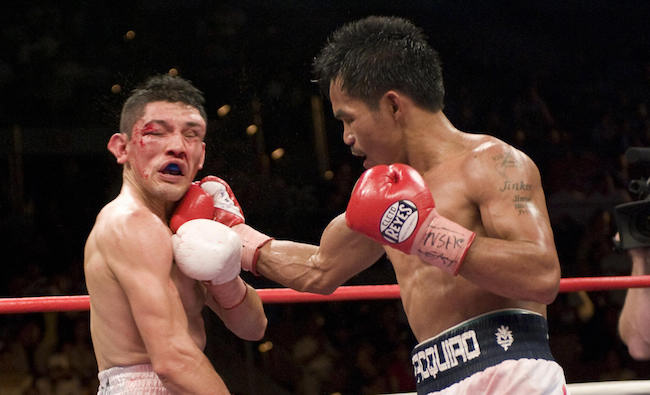 11. With This Savage Beatdown

12. He Loves Basketball And Even Played In A Pro Game In The Philippines

13. Someone Made This Movie About His Life

14. He Starred In This Superhero Movie

17. Which Was Enough To Earn A Drake Parody

18. He Is Inspired To Fight By Bruce Lee

Via The New York Times:

Last month, as Pacquiao molded his style specific to Shane Mosley, his welterweight opponent on Saturday in Las Vegas, he wrapped his hands inside the dressing room at the Wild Card boxing gym here. To explain the way he fights, he settled on three words.

Growing up in the Philippines, Pacquiao studied Lee, watching his movies on endless loops. He still often views his collector’s set. “Enter the Dragon” is his favorite. His conditioning coach, Alex Ariza, says he believes Pacquiao built his baseline movement off Lee’s template, the continual attacking, the feet drummed in and out.

Pacquiao, who fights Shane Mosley on Saturday in Las Vegas, watched the films of Bruce Lee, pictured, while growing up. Credit Bruce Lee Foundation
“Bruce Lee jumped around and kicked his feet and shook his head and shoulders,” Ariza said. “His feet moved in concert with his hands. He could be choppy, but he was rhythmic. Manny does the same thing. It comes from that.”

22. This Is His Ugly Jump Shot

In my country, everyone is passionate about Basketball. There is no better country to host it, than us. @fiba #PUSO2019

24. This Selfie Before The Biggest Fight Of All-Time

25. This Photo That Every Short Guy Has Taken At Least Once

26. The Time He Knocked Out “Floyd Mayweather” In This Commercial

27. He Knocked Out Erik Morales, Not Once

29. The First Round Against Juan Manuel Marquez

30. He Once Dropped A Freestyle In Tagalog With Apl De Ap Of Black Eyed Peas

31. The Dance He Made Miguel Cotto Do With This Knockdown

32. The Face He Made Shane Mosley Make With This Knockdown

33. His Reaction To This Shane Mosley “Knockdown”

35. But Especially His Duet With Will Ferrell

36. The Time He Played Ball With Charles Barkley And Reggie Miller

37. That Time He Became A Professional Wrestler