If you’re a fan of the Washington Redskins, and you woke up this morning to news that your favorite team had won its preseason game on Thursday night, but at the cost of a concussion to your starting quarterback, the embattled Robert Griffin III, how would you feel? Would you be despondent over your incredibly talented player once again felled by injury in an increasingly snake-bitten career? Or would you feel so overjoyed at your team winning a meaningless game that a brutal head injury couldn’t break your stride? 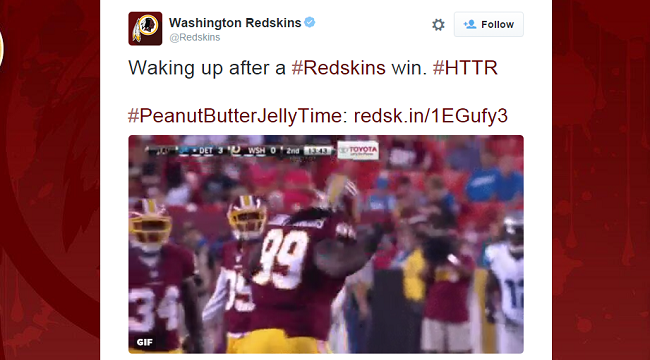 We had to screenshot this because it was understandably deleted by the team shortly after going up, but that picture frozen in time is actually this GIF of defensive lineman Ricky Jean-Francois doing the “Peanut Butter Jelly Time” dance, like so:

It’s a good dance, one that would indeed be representative of happy times. But these are not happy times for fans of the Washington football club, something that the official Twitter account is just now realizing. But we can forgive whoever runs the account, because they clearly are just happy and enthusiastic all the time, like an over-caffeinated Corgi puppy. Look at their reaction tweet to one pretty good completion by their backup quarterback to a backup receiver (again, in a meaningless preseason game):

#CaptainKirk rolls out and finds a leaping Rashad Ross for a gain of 22. #DETvsWAS #HTTR pic.twitter.com/ktNIOU0tUC

How a Redskins fan can stay that plucky is beyond me, but keep it up, Twitter guy!