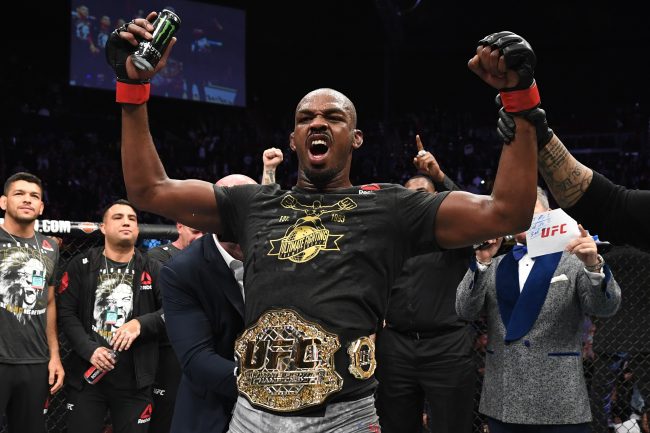 Jon Jones (23-1) defeated Alexander Gustafsson (18-5) by third-round knockout in their highly anticipated rematch for the vacant light heavyweight title at UFC 232 on Saturday at The Forum in Los Angeles, California.

The first round presented a feeling out process, with Gustafsson stuffing a few of Jones’ takedowns, and the latter landing a few leg kicks and a brutal elbow to the jaw. Jones continued his body attack in the second, while finding openings to continuously attack Gustafsson’s legs as he switched stances. Gustafsson started to find his range, however, connecting on a few well-timed combinations in the middle of the round.

To open the third, Jones finally got a takedown, where he took half guard and dropped a handful of elbows. Jones transitioned into a crucifix, which Gustafsson tried to roll out of. Jones took his back and finished him with nasty blows to the head that saw the fight come to an end.

After the fight, of course, Jones called out Daniel Cormier for a third fight, challenging him to come back and get his belt after vacating it earlier in the week.

In their first showdown, Gustafsson and Jones fought to a controversial five-round decision back in 2013 at UFC 165. After the then-light heavyweight champion had a chance to look over the tape from the fight, Jones was more convinced than ever that he handily defeated Gustafsson, refusing to accept a rematch for the title and instead opting to face off against rising challenger Glover Teixeira.

This time, there was plenty of controversy ahead of their showdown, as Jones had “adverse findings” in a USADA drug test, which required moving the entire show from Nevada to California. Jones had just served a 15-month suspension stemming from a second failed drug test, which came from a sample collected the day before he knocked out Cormier at UFC 214 in July 2017. That fight was ruled a no contest and overturned by the California State Athletic Commission.