For those who might not know him, Dave Sholler is basically the closest thing the UFC has to a human Swiss Army knife. Aside from “overseeing public relations efforts for the organization’s 40+ live, global events,” the UFC’s vice president of public relations & athlete marketing can often be seen filling in for Dana White at post-fight press conferences, delivering media briefings and other special announcements, and working behind-the-scenes to improve the health benefits of the UFC’s more than 600 fighters.

To most of us, however, Sholler will forever be that Jon Anik-looking fellow who unsuccessfully attempted to stop Jon Jones and Daniel Cormier from brawling at the UFC 178 media day.

Despite being made the butt of the joke by both his boss and SportsCenter’s “Not Top 10”, Sholler seemed to take the incident in stride (how many of us would have been able to do anything differently?), even receiving something of a social media spotlight in its fallout. But if you happened to catch the absolute sh*tshow that was the UFC 202 press conference last Wednesday, you might have also spotted Dave as the guy who brought Conor McGregor’s Monster Energy-throwing spree to an emphatic end.

Clearly, Sholler took the criticism of his grappling skills to heart and made the proper adjustments to improve upon them, a facet of the lead-up to UFC 202 that went almost completely overlooked by the mainstream media. Well, we noticed, which is why we’ve decided to give Mr. Sholler his due respect via this Jack Slack-esque breakdown of his ever-improving grappling game.

First, let’s take a look at some of Sholler’s earlier tape.

The event: UFC 178 media day. The date: Aug. 4, 2014. Heated rivals Jon Jones and Daniel Cormier were in the process of facing off when a shove by Cormier prompted Jones to drop his belt and engage in a full-on fist fight with his challenger right then and there. Obviously, Sholler’s need to stand facing the cameras during the staredown (and the fact that he gives up at least 50 pounds and 10 inches in height to Jones) put him at an inherent disadvantage, but still, there were several common mistakes made that at the very least, could have slowed Jones down a bit and allowed security a couple extra seconds to break things up.

Notice how Sholler’s hips are turned perpendicular to Jones’, effectively nullifying his ability to establish a solid base? Already, he is sacrificing power and leverage by allowing Jones to lead the dance, so to speak. For most wrestlers, the question of staggered stance vs. square stance often boils down to a matter of preference — with the former making forward and backward movement easier and the latter making lateral movement easier — but here, the staggered stance actually works against Sholler, making it far easier for his much larger opponent to gain momentum and shove him out of the way like a child’s plaything.

To his credit, Sholler quickly realizes his mistake and attempts to square up on Jones, but by then it’s already too late. 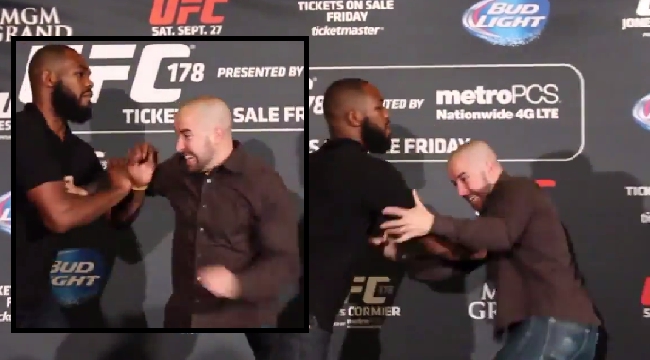 Of course, Sholler’s initial mistakes with his feet are only compounded by the ones he makes with his arms. It’s a generally regarded principal in wrestling and Brazilian jiu-jitsu to never reach across your opponent’s torso, as it not only makes you more susceptible to having your back taken, but creates a much shorter distance between you and your opponent, who it bears repeating was a seven-time light heavyweight champion in this instance. In failing to pummel and secure at least one underhook on Jones (thusly allowing Jones to secure his underhooks), Sholler has all but sealed his fate as a piece of finely-groomed roadkill.

Here’s where it gets interesting. Even as a novice, Sholler demonstrates at least a basic familiarity with the teachings of Judo in the closing moments of the exchange. He places one hand on the back of Jones’ elbow and the other on the inside of his shoulder, surely attempting a throw known as the Morote Seoinage, or Two-Armed Shoulder Throw. A classic demonstration of the technique can be seen below.

The problem is, such an advanced technique is essentially rendered moot when the person executing it hasn’t first established a base upon which to pivot. Had Sholler approached Jones with a firm, squared stance and then switched to a staggered as he was rushing in (rather than the opposite), I have no doubts that he would have launched Jones across the stage and into the lobby of the MGM Grand, forever shaming the pound-for-pound king and proving that the “P” in “PR” actually stands for “Pain-Inducing.”

Now, let’s see how Sholler performed last week. (Head to the 20:20 mark to skip right to the goods.)

Establishes a square base? Check. Works for the underhooks? Not only does he, but Sholler even places a hand on McGregor’s torso first to disguise the set-up. Just a marvelous display of subtle manipulation here. Sholler is in complete control the entire time, but I’d like to draw attention to one particularly fine detail: Sholler’s left foot. (Scroll to around the 1-minute mark for the good stuff.)

Things just got real between Diaz and McGregor at the UFC 202 press conference. pic.twitter.com/cxD8yYBl4W

Did you see it? Whenever McGregor tries to break loose, Sholler cuts him off at the pass by placing his left foot between McGregor’s. I don’t know how many times I’ve heard Joe Rogan wax on about the importance of keeping your lead foot in between your opponent’s to not only open them up to inside leg kicks, but make it far easier to set up a power double leg takedown if needed, and clearly the Sholl-man was listening. Had Conor shifted his weight to his back leg, he would have even been able to take him down with a Karate-style driving foot sweep if he so desired.

Instead, Sholler opts to just strong arm McGregor off stage like the f*cking savage that he is while Dana White just stands there like a dope.

Gets his hook in, pivots, and actually ends up twisting Conor’s hips into the staggered stance to throw him off his momentum. I swear, McGregor is so caught off guard by Sholler’s technique that he must’ve thought that Diaz had somehow managed to teleport behind him. You can see the surprise — and dare I say, fear — in his eyes, as Sholler channels the spirit of Tim Boetsch to ragdoll him into perpetual darkness.

Obviously, you could make the case that Sholler’s relative similarity in size to McGregor was responsible for how he fared this time around, but to do so would be to ignore the improvements of what is clearly in a future grappling master on the rise. Sholler 2.0 is here to bang, bro, and every fighter from featherweight on up to welterweight would do themselves a favor to take notice.