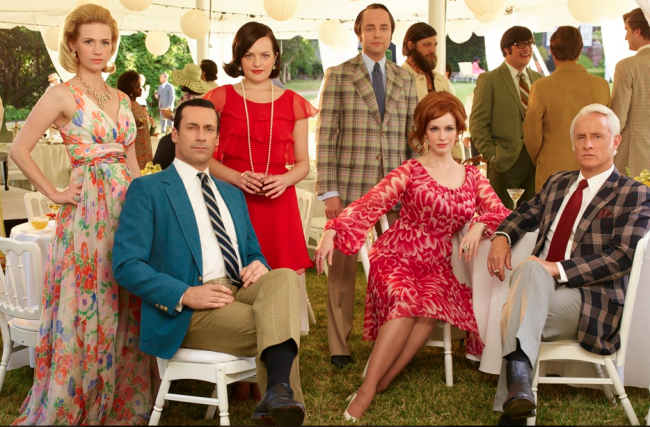 The second half of the split final season of Mad Men kicks off this Sunday night. We know, uh, very little about it, due mostly to the fact that showrunner Matthew Weiner guards his upcoming plot points with the same commitment that Coca-Cola guards its secret recipe, and it’s been a little while since the first half of the final season ended, too. A lot has happened since then. A lot of television. It’s understandable if you’re all a little fuzzy on things.

With all that in mind, let’s take a little look back, and a little look forward, with these 10 open questions we have about the show’s last hurrah.

When we last saw the braintrust of Sterling Cooper & Partners they were voting on whether to sell a 51 percent stake in the agency to McCann-Erickson, making (A) SC&P an independent subsidiary of their one-time competitor, (B) Roger Sterling the new president and top banana, and (C) all of the partners very rich. (Roger’s hypothetical sale price of $65 million in 1969 dollars would net the partners between $10 million and $40 million each in today’s dollars, depending on their stake in the company.) Assuming of course that the sale went through. We never did see them sign the papers, as the season ended instead with Don having a vision of the singing and dancing ghost of Bert Cooper gliding though the office in his socks. Maybe Don hallucinated the meeting, too, thanks to Cutler dosing his Old Fashioned with mystery drugs off-camera. Too soon to tell.

The other fallout here — besides fabulous wealth and Roger in a position of great authority, both of which sound delightful — is that Cutler and Lou are presumably out, and Don is back in charge of creative, making him Peggy’s boss again after a brief window when he was “under” her. Hoooooow’s that gonna work out? I know they made with the nice-nice during the Burger Chef pitch, but these two are always clanging heads and yelling at each other. It’s only a matter of time before this blows up a bit, right?

It seems like he should be okay. He’s rich, he got his job back, and his adversaries have been vanquished. Professionally speaking, it’s hard to ask for much more. But the professional part has never really been Don’s problem, even when it kinda was. It always goes back to the personal demons with him (booze, women, whore mom, dad killed via horse kick, secrets piled up to the heavens), and whether he can corral them long enough to stay out of his own way.

Also, where we left him, he was full-on single again. Last time that happened he went on a world class bender, paid a prostitute to slap him around, and up and spontaneously married his secretary. Who the hell knows with this guy?

3. What if we come back and Meredith is running the entire office and they NEVER explain it?

I have put a lot of thought into this and I have decided it would be the funniest possible development.

An incomplete list of things Ted did in the first half of this season:

He was basically a suicidal, funnier Charlie Brown. Aaaaaand now he’s locked into a brand new five-year contract with the agency, which was a requirement in order for the deal with McCann to go through. He seemed, like, a little hopeful when Don told him he could come back to New York and focus only on creative, and he does have $20-30 million to help him pursue whatever exactly it is that he’s seeking out of life, but still. Ted Chaough has been BUMMED OUT lately. Maybe he’s the silhouette tumbling through the sky in the opening credits.

Harry Crane hemmed and hawed about signing his partnership agreement and the result was that he was completely shut out — quite literally — when it came time for the partners to cash in. This despite the fact that it was him who spilled the beans to Don about Cutler and Lou going after a tobacco account, which set in motion the whole thing where Don crashed the meeting and Cutler sent the breach letter and Roger finally got fed up and made the power move to negotiate the sale. You could make a decent argument that none of that happens without Harry getting loose-lipped in a California bar. He must be so sad. Like, picture his face when he finds out the exact figure he left on the table.

Also, related: What happens to the computer? Cutler was the one driving the whole Harry & Buzzing Future revolution. Now he’s out and Don — who more or less called the computer guy the devil after secretly drinking a bottle of clear liquor — is back in charge of the agency’s direction. We keeping the technology around? Banishing it and Harry to some kind of advertising limbo? Smashing it with a hammer and sending a dented scrap to Ginsberg to hang on the wall of his institutional dwelling as a trophy? Could go a lot of ways.

6. What would it look like if everyone suffered an eye injury, and they all had to wear eye patches like Ken?

Follow-up question based on Stan’s outfit in that picture: Do you think he enjoyed the safari he apparently just returned from?

Seriously, though, the clothes this season are going to be incredible. Pete might wear a jacket that is so loud it gets him ticketed for a noise violation.

Because she voted with Cutler to have him fired after his surprise tobacco meeting drop-in, and she was the partnership’s spokesperson when it came time to present him with the restrictive conditions of his return. Their relationship is strained, to say the least. Are they gonna be able to mend that now that SC&P is one big happy-ish family again, or are mommy and daddy gonna be fighting all season?

8. Has Sally murdered Betty yet (or vice versa)?

Only one of them is making it out of this series alive. The smart money is on Sally. Betty might act out in a moment of passion, but Sally is the one who is patient and calculating enough to see a plan through. I’m convinced she’s capable of evil. She’s basically a supervillain.

9. Is Pete Campbell gonna get eaten by a bear or what?

Dammit, look. I have a lot riding on this one. It started out as a running joke almost two years ago. Now other websites like Vulture and Esquire are bringing it up in their own Mad Men swan song previews. My entire reputation is on the line.

But here’s the thing…

Do we even want a bear to eat Pete anymore? Outside of a few mini-tantrums last season, he wasn’t even that bad. I mean, for Pete. Especially compared to Cutler and Lou. He even fought for Don. And one time when he WAS being a petulant little brat he told Trudy he knew her “debutante maneuvers.” Debutante maneuvers! It’s just… I think the little turd might be growing on me. I have so much to ponder.

See, here’s the biggie, and the short answer is that I have no idea. Like, on one hand, yeah, the entire series has been about this horribly conflicted and troubled guy who drinks and smokes too much and is prone to making very spontaneous self-destructive decisions. If you knew a guy like that and got a call one night that he died, would you really be all that surprised? Plus, nothing provides closure like a good death. Very neat and tidy. Bingo bango, cut to black.

On the other hand, Mad Men is one of the only recent big fancy prestige dramas that isn’t set in a world filled with violence. Don isn’t butting up against drug dealers every day like Walter White in Breaking Bad or Omar in The Wire, or involved in an ongoing struggle with organized crime figures like Tony in The Sopranos or Nucky Thompson in Boardwalk Empire. People have died on the show, sure, but they’ve mostly died of normal life stuff. (Old age, suicide, getting heaved off of a cruise ship by your gay Spanish caregiv-… ignore that last one.) It’s not like Don is a murderous sociopath whose death is a foregone cleansing solution. He doesn’t have to die.