Over the course of six seasons, there have been countless celebrity guest appearances on Archer, ranging from the likes of Mad Men star and Coca Cola marketing guru Jon Hamm, to “Danger Zone” singer-songwriter Kenny Loggins. In honor of that parade, and because we miss the show so much in the off-season, here’s our look at some of the most memorable celebrities who have made their voices available to Archer over the years.

SNL alum and current Portlandia creator and Late Night with Seth Meyers bandleader Fred Armisen appeared as the president of San Marcos on Archer Vice. Although he was admired by his people for being a man of the people, he was actually an evil man who was merely covering up his lavish lifestyle. In the end, he loses his post and learns a painful lesson about the prickliness of tigers.

Sons of Anarchy star Ron Perlman guest starred as a gay former spy for Fidel Castro, who attempted to blackmail Malory by exposing her sex tape. But Malory counter-blackmailed him by sending Sterling to seduce him into having sex on tape, and in the end the two bonded and Limon even got a kiss.

Burt Reynolds as Himself, Multiple Episodes

Burt Reynolds starred as, well, Burt Reynolds, the guy some of your moms had a huge crush on. Which is something that Archer had trouble dealing with when he found out that his mom was dating his hero.

Clarke Peters, a former key player as detective Lester Freamon on The Wire, flipped that role on its head when he starred on Archer as a former loan shark/pimp. He even took it a step further when later he becomes the owner of the ISIS business front dry cleaners, “Popeye’s Suds and Duds.”

No Reservations and Parts Unknown star Anthony Bourdain guest starred as Lance Casteau, a man not unlike himself. Casteau is the head chef at the “16” restaurant and even hosts his own cooking show properly entitled Bastard Chef.

David Cross starred as anthropology doctoral candidate, Noah, who also just so happened to be a slave pirate aboard a pirate ship. Despite later working his way up the ranks to be Archer’s first mate after he violently seizes the title of Pirate King, he kinda winds up getting screwed over and set back by the end of his arc. Because poor David Cross always seems to land the characters that aspire to be something greater than they’re capable of.

Mad Men star Jon Hamm has proven that in addition to being a handsome actor, he is highly skilled in absurdist comedic acting (Comedy Bang! Bang!, Kimmy Schmidt, etc.) and he’s got a pretty great sense of humor. This is why one can imagine him jumping at the chance to player an underwater lab sea captain who has an unfortunate run-in with a soda machine… which, in hindsight and with regard to the Mad Men finale, is now extra funny.

Sleater Kinney member and Portlandia co-creator, Carrie Brownstein guest starred in the Season 6 two-part finale Drastic Voyage, as Dr. Sklowdoska, a woman who fancies herself “a sexual being.”  And if there’s one thing we know about the characters Brownstein portrays, it’s that they know exactly who they are.

Seinfeld’s Puddy guest starred as Rip Riley, a man-hunter and former ISIS agent who is sent on a mission to find Sterling after he goes missing for several months. Perhaps all the Arby’s he’s been eating has led to a more proactive lifestyle.

Bob’s Burgers and Last Man On Earth‘s Kristen Schaal is no stranger to playing offbeat characters, so it should come as no surprise that when she guest starred on Archer, she played Cecil Tunt’s (Cheryl’s brother) girlfriend Tiffy, a vegan helicopter pilot.

Breaking Bad’s Bryan Cranston guest starred as the unhinged ISA Horizon International Space Station commander, who is in many ways, a doomsday prepper preparing for life on Mars, where he no doubt wanted to establish a space meth empire… as well as other things. 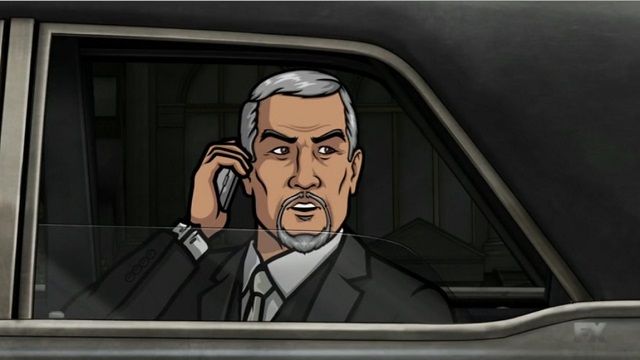 Star Trek alum, activist, and fantastic internet personality George Takei, guest stars as Yakuza gang leader Mr. Moto, who in his first appearance, is shot by Mallory. When he makes another cameo in Season 5, he puts a bounty on Pam’s head, after she helped scam the Yakuza out of loads of money. Oh my!

Kenny Loggins as Himself, Season: 5 Episode: 6

Let’s just say there’s a “Danger Zone,” Cherlene and Kenny Loggins duet and leave it at that!