Bring Back Fukunaga! Breaking Down The Most Irritating Moments In Last Night’s ‘True Detective’

I’ve been in something of a denial over the first two episodes of True Detective, silently hoping that nothing is quite what it seems and that Nic Pizzolatto would pull something out of the wreckage of inexplicable lines, overwrought dialogue and obvious plot points. Last night, without the crutch of Justin Lin, the thin facade that gave some of us hope that True Detective could repeat the success of last season completely fell apart. We have never missed last season’s director, Cary Fukunaga, more.

I will say one thing in the show’s favor: Frank Semyon’s storyline, while obvious, at least allowed Vince Vaughn to further come out of his shell. Blistering, fast-talking Vince Vaughn throwing punches and pulling out teeth? That’s good stuff.

Every thing else in the episode, “Maybe Tomorrow,” was a train wreck. Let’s break down the 20 most annoying moments from the episode.

1. The opening David-Lynchian dream sequence from director Janus Metz Pedersen (who is best known for directing documentaries) briefly led us to believe that Season 2 was taking a weird-ass detour into the afterlife, a terrifying place that included Ray Velcoro’s abusive father and a Conway Twitty impressionist. CONWAY TWITTY? That was clearly a flashback to Pizzolatto’s Southern upbringing.

2. Alas, it was all a fake-out, and a weak one at that, as Ray was awoken by the arrival of Warren Zevon on the clock radio, and it was revealed that the Bird-Man killer had shot him in the chest with buckshot used “by cops” in riots. CHEAP PLOY, PIZZOLATTO! The only joy we got from that was the fact that Ray pissed himself.

3. We did learn, however, that a Web camera was stolen from the scene, and we were left with the impression there might be some incriminating information on it, because Pizzolatto repeated that fact OVER AND OVER because apparently, Pizzolatto has also lost trust in his audience to figure things out on their own. We do not need it crammed down our throats, Piz. You do not need to figuratively draw us a flashing arrow to the evidence. That stolen Web cam may also include evidence implicating the mayor, which we know because of the NOT SO SUBTLE shots of the mayor fidgeting whenever Ray mentioned the video camera.

4. Frank Semyon, like Paul Woodrugh, can’t get it up because this is apparently not just a story of hard men with dangerous pasts, it’s also about emasculating them with impotence. Let me just say, Piz, that it’s possible to hammer that theme without recycling the erectile-dysfunction motif. It wasn’t really all that necessary to add the Hustler magazine into the scene where his wife is trying to blow him, either. We get it. He can’t get it up. But sure, why not, let’s add potential infertility into the mix, as well.

5. Which was the most inexplicable line of the night?

A: “There’s not a part of my life that’s not overwrought with liver-dying importance!”

B: “They treating you alright?”

The answer is A, because it was not only inexplicable, but also ironically “overwrought.”

6. “Is that a f*cking e-cigarette?” In case you couldn’t detect it underneath all the bleak, convoluted plot-lines, Piz is actually trying to inject some humor into the season by calling back to Ani’s e-cigarette. This is what passes for jokes on Season 2 of True Detective.

“I’m feeling a little apoplectic myself.”

Great! Now everyone is apoplectic, which is definitely a word you often hear cops and gangsters exchange with each other.

8. You know what this season was missing? A mail-order bride and her stepson of a pimp, who inexplicably has several accents. I am fairly certain the ONLY reason for this scene was so that the mayor of Vinci could later call Ani a “c*nt” repeatedly.

9. Just when you thought that the story couldn’t get any more convoluted, a safe-deposit box reveals Ben Caspere ALSO had blue diamonds. Did we really need an ANOTHER layer to add into the investigation into the land project, the corporate holdings, the connections to Catalyst and Semyon, and the predilection for prostitutes? (Note that blue diamonds are among the most valuable in the world, going for more than $1 million a carat).

But in case you were wondering whether the land deal or the hookers were behind the death of Caspere, Vinci’s inner circle basically answered that question by telling Velcoro to “keeping working the hooker angle,” which is the least subtle way possible to say: IT’S IN THE LAND DEALS.

10. We also got to meet Ray’s abusive, drunken father outside his dream-life, too. I’m not sure there was much reason for this scene, other than an awesome excuse to cast Fred Ward or, perhaps, CHEKHOV’S BADGE?

11. “He looks half-anaconda, half-great white.” It’s like a Rust Cohle line accidentally got the National Geographic channel pregnant, and this line of dialogue was the late-term abortion.

12. In last week’s rundown, I suggested that there’s NO WAY Paul Woodrugh was gay, because that would just be TOO obvious and dumb. There’s no way Pizzolatto would stoop to the self-hating gay trope, right? WRONG. Unbelievable.

13. For those who keep up with behind-the-scenes scuttlebutt, the scene with the director on the post-apocalyptic movie was possibly a passive-aggressive dig at last year’s director, Fukunaga. I think that, when you’re vomiting up overly obviously storylines and overwrought dialogue, maybe it’s not a good idea to call attention to the guy who many credit for the success of last season’s True Detective, but that’s just me.

14. This woman was interviewed by Ray and Ani in the first episode in the city manager’s office, and now she’s interviewed in the third episode on the set of a film. Both interviews seem like throwaway interviews with someone who means nothing to the storyline, which probably means that she’s the key to unlocking the mystery behind the bird-man killer.

15. I gotta say that I’ve had my eye on this guy as the killer since the beginning, mostly because if you’ve ever watched any police procedural, ever, the assistant is the killer about 60 percent of the time. The fact that his phone was turned off when Frank needed him AND when another body dropped only heightens my suspicions. Again, though, it’s TOO OBVIOUS, but the way things are going this season, the TOO OBVIOUS choice might be the right one. 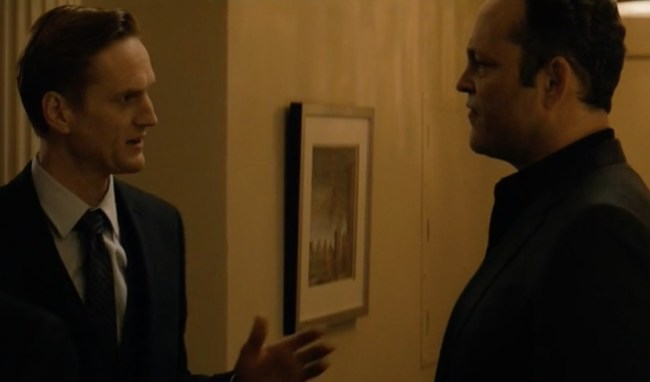 16. Oh no! Stan is dead! Wait, who the hell is Stan? Seriously, I’ve seen the first two episodes two to three times, and it still took me 15 minutes to track down Stan. He was the guy who sprayed mace in that bookie’s face.

Maybe if you’re going to make a huge deal out of a dead character, you at least remind us of who the hell he is. RIP Stan. I guess.

17. Do you have any idea how awesome an actress Abigail Spencer is? Watch Rectify, and you’ll see. Here, she’s COMPLETELY wasted, basically as a straw man for the investigation into Ray’s murder of her rapist.

18. Seriously, Piz. We get it! You don’t need to put Paul Woodrugh in a club with a gay guy and have him looking brooding and uncomfortable while he fidgets. You’re just piling on at this point.

19. The difference between this extended chase and the incredible 6-minute tracking shot in last season’s True Detective proves EXACTLY why last season was better than this one: Cary Fukunaga.

At least there’s still some breadcrumbs that MIGHT lead somewhere interesting.

(Via Pajiba, Vanity Fair and Vulture)