A Nose For A Nose: Nine Clarifying Questions We Have After Last Night’s ‘Bastard Executioner’

The third episode of Kurt Sutter’s Bastard Executioner, “Effigy/Delw,” aired last night, and while the main storyline was straightforward — a Welsh peasant girl had her nose sliced off for breaking off the nose of the Baron’s effigy — there were a lot of moving parts in the background that may have been more difficult to follow. Hopefully we can help clear up that confusion by answering a few questions viewers may have had after the episode.

1. What exactly is the historical backdrop driving the narrative?

Good question, because if you were looking at your phone in the first minute of the pilot, or if you have only been half-watching The Bastard Executioner, the alliances may be confusing. There’s a lot of Welsh people and a lot of English people, and it might be difficult to discern who is on what side.

In short, King Edward II (who we have not yet met) is the English king running the the nation at the time, and he’s trying to quell a Welsh rebellion.

The English also rule Ventrishire (where the Baroness rules), and the now deceased Baron Ventris was English. However, Baroness Lady Love (Flora Spencer-Longhurst) is Welsh-born, and she clearly has sympathy for the Welsh, or, at the very least, she wants to end the bloodshed.

The other wrinkle here is that Wilkin Brattle is English. In fact, he originally fought for King Edwards’ army, but when he put down his sword and tried to start a family, he got fed up with the taxes and oppression of King Edward, which politically put him on the same side as the Welsh. So, Wilkin Brattle is being pulled in a lot of directions. He’s English, and he’s serving as the Executioner for the English Ventrishire, but he’s sympathetic to the Welsh, he’s grown increasingly cozy with the Welsh-born Lady Love, and he owes a debt to the leader of the Welsh resistance, The Wolf, even though he’s also protecting Lady Love from The Wolf’s Welsh rebellion.

Right! His name was mentioned several times last night. The Baroness is intent on having a meeting with him. He’s being presented as a shadowy, hard-to-find figure, but recall, we met him last week. He’s played by Matthew Rhys from The Americans. He’s nearly unrecognizable.

3. Milus Chamberlain (Stephen Moyer) called Brattle by his real name, instead of the name he’s going under as executioner, “Gawain.” What’s up with that?

In a show that has trouble with restraint, it was surprising — when Chamberlain called Brattle by his real name — that there wasn’t a dramatic pause and loud music to cue the revelation. But yes, Milus knows exactly who Brattle is, and probably knew him back in the day, when Brattle fought for the English. He wasn’t just any Knight, after all. He was a Knight that the Baron attempted to have killed.

See, Milus is trying to use Brattle for political gain, because he has leverage over him (Kurt Sutter has always been about leverage), but Brattle has some leverage over Milus, too. Brattle killed Milus’ brother, after all, based on a lie, and Milus knew it was a lie. If Milus rats out Brattle, Brattle can rat out Milus, and while it might not cost Milus his head, it would definitely cost him the trust of Lady Love. 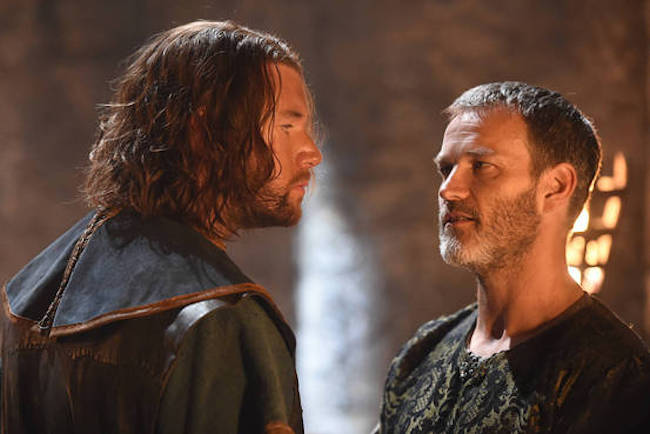 4. Milus had sex with a man in the first episode, and now he’s having sex with female twins. What’s going on?

It’s the 14th century, y’all! There’s no gay, straight or bisexual. Sex is all about power, and Milus likes to exercise his power over everyone. It’s the Bastard Executioner equivalent of twirling one’s mustache.

Two of the major themes in all of Kurt Sutter’s oeuvre is loyalty and vengeance, and which one is most important. That’s where Brattle’s best friend Prichard comes into play. He’s a Welsh farmer, so he has even more reason to hate the rulers of Ventrishire besides the fact that they killed his family and burned down his village. Expect to see some growing tension between Prichard and Brattle.

Meanwhile, Brattle wants to kill Leon Tell (Alec Newman) as soon as possible, because he thinks that Tell is responsible for murdering his wife (because Tell is wearing his wife’s necklace). In reality, Tell let his wife go.

Prichard, meanwhile, wants his own vengeance, so he’s preaching patience to Brattle so that they can surface all who were responsible for the burning of their village and murder the lot of them.

But there’s another tense thread here. As Brattle grows closer to Lady Love, that might also fray his relationship with Prichard because Prichard hates Ventrishire for political reasons, as well, on account of being Welsh. Brattle doesn’t have the same blood hatred because he’s English.

Moreover, what will happen when Brattle finds out that Leon Tell didn’t kill his wife? That’s just another thread to keep an eye on.

6. Are you thinking what I’m thinking? Is Annora Brattle’s real mom?

Well, maybe. I think the show at least wants us to consider that possibility. After all, Annora is basically Sons of Anarchy‘s Gemma Teller all over again, so it would make sense that Brattle is the Jax in this situation, e.g., the son over whom she’s trying to exercise influence.

Let’s keep both of those possibilities on the back-burner.

I have no idea. Your guess is as good as mine. Is that supposed to be Russian or something?

8. Are we supposed to understand what’s going on with the bodies with severed limbs discovered by Annora?

I was confused by that, too. Director Paris Barclay helped clear that up in an interview with Yahoo.

The bodies aren’t arbitrary. People are losing their lives in pursuit of someone or something. Annora seems to be the one who has the overall view of this, but she’s not sharing that with all of us yet. As each episode goes on, you’ll learn a little bit more about what’s actually happening and why these bodies are there, and why they’re arranged in such a way, and how that ties in with the whole mythology of our series.

Oh, okay! Good. We’re not supposed to know what’s going on yet.

9. What was that “pear” device they threatened to use on Nia, the teenage Welsh peasant?

You really, really don’t want to know, but here’s the description from Medievality:

A pear-shaped instrument was inserted into one of the victim’s orifices: the vagina for women, the anus for homosexuals and the mouth for liars and blasphemers.

The instrument consisted of four leaves that slowly separated from each other as the torturer turned the screw at the top. It was the torturer’s decision to simply tear the skin or expand the “pear” to its maximum and mutilate the victim.