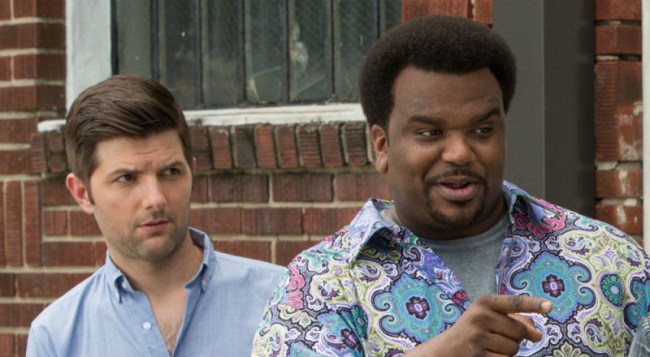 The last time that Adam Scott and Craig Robinson paired up, the result was Hot Tub Time Machine 2: a critically maligned box office disaster that our own Mike Ryan dutifully attempted to stop you all from seeing. While both funny men managed to emerge from the wreckage of HTTM2 with nary a scratch on their otherwise sterling reputations, the then-flourishing subgenre of hot tub-based time-travel movies tragically never recovered.

Thankfully, it looks like FOX will be re-teaming the Parks and Recreation and The Office stars for a project that might actually be worth their while: a supernatural, single-camera comedy called Ghosted. The Hollywood Reporter has the scoop on the loose plot details of the upcoming series:

Ghosted is described as a comedic take on The X-Files and centers on Leroy Wright (Robinson), a cynical, hilarious skeptic, and Max Allison (Adam Scott), a genius “true believer” in the paranormal, who are hired by the Underground Investigative Service to look into the rampant “unexplained” activity in Los Angeles — all while uncovering a larger mystery that could threaten the existence of the human race.

That Awkward Moment scribe Tom Gormican will be penning the pilot, which if picked up will serve as Scott’s first recurring broadcast television role since his time on Parks and Rec. Robinson, on the other hand, will be looking to bounce back from his short-lived NBC sitcom Mr. Robinson, which was cancelled after just six episodes last summer. While Robinson did enjoy a six episode arc on the second season of Mr. Robot this year, Ghosted would fill a much-needed lack of the dinkin’ flicka man on network television.

As potentially viable as an X-Files parody sounds — assuming that the last season of The X-Files wasn’t *supposed* to be a parody — am I the only person who would be totally fine with never seeing the phrase “threaten the existence of the human race” again? The past six months have all but confirmed that the human race might not be all that worth saving, and I’d be just as fine seeing a team of paranormal investigators tasked with saving a litter of abandoned kittens from a burning building every week as I would the nameless, faceless legions of KFC sunscreen-wearing, cargo shorts enthusiasts, if not more so. Just a thought, FOX. (And yes I can send you a treatment of this show ASAP if needed).