All The Easter Eggs From ‘The Flash’ Finale

First of all, if you didn’t see The Flash finale, it was essentially It’s A Wonderful Life, complete with working your tear ducts like a punching bag. It’s some gutsy television that genuinely elevates a lighthearted show about a guy who can run really fast.

Oh, and it was also full of stuff about next year in the DC Television Universe. Spoilers ahoy!

Probably the best shoutout of the night was when a helmet came flying out of the new hole Barry tore in the universe. It’s a rather dense nerd joke, but that’s essentially the preferred headgear of Jay Garrick, the original Flash, and it’s actually more meaningful than you might think.

As any DC nerd can tell you, one of the more beloved concepts in DC is that of alternate universes. And that idea was first introduced with Barry Allen and Jay Garrick, in the story Flash of Two Worlds. So, this one helmet has introduced the idea of a broader multiverse and introducing even more heroes.

If that looks like cast member Danielle Panabaker in a blonde wig and weird contact lenses… well, that’s exactly what it is. The Flash has been dropping hints all season that Caitlin is going to turn into her comic book alter ego Killer Frost, and it appears that she’ll be going full supervillain in Season 2. Of note, to cure her condition, in the comics, Caitlin needs to absorb warmth from humans and the Firestorm matrix can permanently cure her, something we are sure will not come up at all next season.

A slightly goofy but still fun touch is acknowledging the Flash Museum, which came about because somebody on the DC editorial staff noted Barry Allen was probably, among other things, a tourist attraction. It’s been part of the Flash story since the ’60s, and it’s nice to see it acknowledged.

Plenty Of Legends Of Tomorrow Gags

This episode spent plenty of time setting up Legends of Tomorrow. Rip Hunter is name-checked by the Reverse-Flash when he sees the time machine Cisco built, which reminds us, do they just send him Nobels in the mail? Or does Cisco just not publish his work?

Anyway, beyond that, there’s plenty of shout-outs to the upcoming DC series. Victor Garber is a key cast member in this episode, not least for the pep talk he gives the dejected Eddie. Barry foresees the factory fight in the trailer:

And if that weren’t enough, we get a brief shot of Ciara Renee, also known as Hawkgirl, at the very end of the episode:

They even throw in a reaction shot from Captain Cold, who we assume was out robbing a bank in broad daylight. The only cast members not mentioned are the White Canary, who we’re assuming gets her own episode in Arrow‘s fourth season, and the Atom. Although maybe the Atom is in the episode, too. He is really tiny, after all.

One topic fans have been arguing about is Cisco, who shares a name with notorious hero Vibe. The show seems to acknowledge that Cisco has some form of superpowers, as noted by the Reverse Flash, which will likely be important. Just hopefully Cisco doesn’t suit up; Vibe’s not noted for his subtlety. 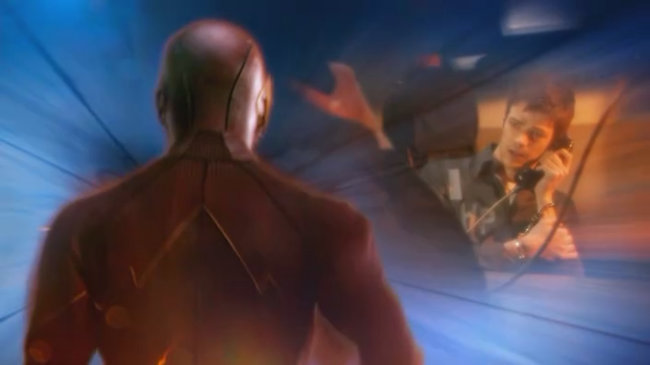 That looks like Barry in cuffs, wearing an Iron Heights prison jumpsuit. As for what might be happening here, we’ve got no idea… but they have to have some mystery for Season 2.