Faced with the prospect of being fired two weeks ago on Veep, Tony Hale’s Gary Walsh absolutely unloaded on President Meyer. Given a few seconds to consider her future prospects without her reliable bag man, however, President Meyer came to her senses and the two made amends.

I’m not so sure, however, that President Meyer and Amy Brookheimer (Anna Chlumsky) will be as quick to reconcile after Amy’s meltdown in last night’s episode. This meltdown has been brewing for weeks now, especially as the president has continued to disregard the opinion of her campaign manager in favor of her new campaign assistant and Yes Man, Karen Collins (Lennon Parham).

The episode, “Convention,” saw President Meyer scrambling during the Democratic National Convention to come up with a new running mate after she scuttled her old one at the last minute. It should’ve been a major opportunity for the campaign, but one potential running mate after another continued to turn her down.

Meanwhile, Amy continued to push Tom James (Hugh Laurie) forward as a potential running mate, only to be ignored or rebuffed by both the president and her adviser, Collins, who had the ear of Meyer only because she continued to agree with her, no matter what her opinion was. After Karen delivered one more empty, diplomatic response to a Meyer suggestion, Amy went into full meltdown mode:

“I think each candidate has merits and demerits,” Amy yelled, mimicking Karen. “And I don’t know my left butt cheek from my right butt cheek, but I believe in listening to both butt cheeks and then farting out my asshole mouth.” 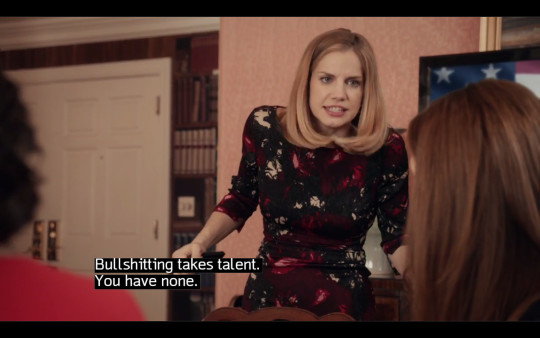 Then, Amy turned her ire toward the President of the United States and completely lost it.

“I have bitten my tongue for so long that it looks like a dog’s cushion. But no more!” Amy said. “You have made it impossible to do this job.”

“I have had enough. I’m gone!” Amy said, quitting and making her way toward the door, but not before returning to get one last jab in, at the president’s expense. 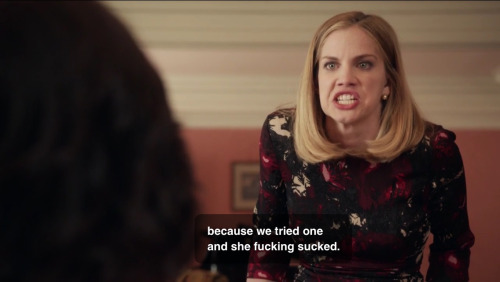 The bad news is: Amy is no longer Meyer’s campaign manager after that tirade (that position has been given to Kent (Gary Cole)). On the other hand, Meyer did ultimately heed her advice and select Tom James to be her running mate, and more importantly, she sh*tcanned Karen Collins.

Where does that leave Amy? Who knows? Her and Dan are out of the White House, and which may — somehow — leave room for Jonah to be inexplicably be promoted by simply failing upwards, which — come to think of it — is kind of how Selina Meyer landed the presidency. The right people do not always ascend. Politics, after all, is not an exact science.