The Best Shows On Netflix You’ve Never Heard Of

Netflix original programming has grown from one series in 2012 to 36-plus series in the years to come, which means that Netflix is as full-fledged a network as FX or AMC (in fact, they’ll provide even more programming by 2016). As they ramp up their original programming, expect to see fewer series from other networks streaming on their service. With that said, however, there are still quite a few series on Netflix that haven’t been as widely discovered as they should be.

It’s hard to find a truly obscure quality television series these days, given the amount of coverage that any TV show gets. These 10 shows, however, are still either very much under the radar or haven’t been as widely seen as they deserve to be.

Here are the 10 best shows on Netflix you’ve (maybe) never heard of, or, at least, that you probably haven’t watched yet.

Scrotal Recall — When How I Met Your Mother ended its run, the networks all rushed to find the next great rom-com sitcom, and as is often the case when the networks attempt to clone another series, they all failed. Scrotal Recall is the series that may finally fill that void. It’s a British sitcom from relative newcomer Tom Edge, and it’s about a guy who is diagnosed with chlamydia and must contact all his former lovers in order to inform them of the disease. If you’re not into rom-coms, however, don’t let the romantic elements dissuade you. It’s also a very raunchy, hilarious tour through a lot of sexual misadventures and escapades more befitting the title of Scrotal Recall. It’s a funny, sweet, and surprisingly great series, given the title. It’s also only six episodes, so it’s an easy one to bang out.

Rectify — Rectify is maybe the best series on television that no one is watching. It’s about a guy named Daniel Holden, who is played soulfully by Aden Young. He was locked up and put on death row nearly 20 years ago for raping and murdering his girlfriend. However, DNA evidence has come to light that cast doubt on his guilt, so the court system has no choice but to release him. Is he actually guilty? Or is he innocent and misunderstood? That’s the question that the series poses, and that’s the question that the people in his small town, including his family, have to ask themselves, as well. Is this man we’re letting back into our family a murderer and a rapist, or is he the kind, thoughtful man he appears to be? Rectify is a beautiful show about appreciating life that manages to perfectly straddle the line between bleak and hopeful, and quietly provides some of the very best performances on television.

Honorable Woman — Honorable Woman is a remarkably good, well-acted and brilliantly crafted political thriller starring Maggie Gyllenhaal. But it’s bleak, and one of the darkest, grimmest series I’ve ever watched. It’s immediate concern is a family business that provides fiber optic cables, but it quickly gets wrapped up in a grand conspiracy involving Israel and the Middle East peace process. There are a lot of deaths, there’s a lot of anguish, and there’s some very dark themes. It’s a great series — and maybe even an important one — but it’s not fun to watch. However, there’s a reason why it’s one of last year’s Peabody winners.

Peaky Blinders — Peaky Blinders may be the most enjoyable British drama on Netflix to watch, even if it, too, is bleak at times. If you don’t know anything about it, Peaky Blinders is the British version of Boardwalk Empire, in that it’s set in the same time period and deals with some of the same matters, only over in Britain. Peaky Blinders are British gangsters, and while bootlegging and gambling is involved, so is the IRA. Cillian Murphy in the lead is absolutely fantastic, something akin to a Prohibition era Boyd Crowder, and there’s also some fun guest arcs from the likes of Noah Taylor and Tom Hardy. There are two seasons, and, trust me, once you start, you’ll get hooked quickly. Danger even puts it a half-step down from the best dramas on television, like Breaking Bad and the first season of True Detective.

Black Mirror — Black Mirror is maybe the most clever and forward-thinking series on television, and it’s incredibly good. Each episode is stand-alone, but they each revolve around the very real threat that technology and the future pose. Remember how The Truman Show or Idiocracy ultimately kind of our realities? That’s Black Mirror: The questions is pose will probably be realities within five or 10 years. The series is often very funny, but it’s incredibly dark humor, and some of the plot turns are, uh, very twisted. They’re like Twilight Zone episodes set in the near future, where our iPhones, artificial intelligence, and YouTube, and reality television are the biggest threats to our society.

Sleeper Cell — Before there was Homeland, there was Showtime’s Sleeper Cell. Nobody ever talks about that series, but the first season, at least, was the better of the two series, both of which dealt with terrorist threats. Similar to Homeland, in Sleeper Cell, the soulful Michael Ealy infiltrates a terrorist cell, and ultimately ends up developing some sympathies with the men tasked with suicide bombings. Not with their causes, mind you, but with their motivations. It’s very much in the vein of one of those movies like Donnie Brasco where a cop infiltrates the mafia to take them down from the inside, but the stakes are much larger here. The 2005 series simply came out a little ahead of its time; I don’t think viewers were ready to see the humanity in terrorists so close to 9/11.

Awake — From Kyle Killen, Awake is show about a guy living two lives. After a tragic car accident, Michael Britten (Jason Isaacs) wakes up to find he’s living in two realities. In one reality, his wife survived the car crash, but when he goes to sleep, he wakes up in another reality where his son survived the car crash. The catch? Britten has no idea which reality is real and which is a creation of his mind, and neither, for that matter, does the audience. There’s a procedural format to the 13-episode series — Britten uses clues from one reality to solve cases in another — but there’s an eerie, almost Twin Peaks dreamlike quality to the series long mystery, and Killen — as if he knew the show would be cancelled after only one season — even manages to give it some finality.

Traffic Light — Traffic Light was another Friends-clone, only this one was good, and it improved as the one-and-done season went along. It often involved three men chatting on their phones while they were driving, which is why it was called Traffic Light. Like any Friends clone, it’s the cast that makes it work, and this one boasted a great comedic cast that includes Aya Cash (You’re the Worst), Nelson Franklin, who you’ll recognize from both Veep and New Girl; David Denman, who played Roy on The Office , plus Kris Marshall — who you’d recognize if you’ve ever seen Love Actually. Besides Cash, however, the best thing about Traffic Light was Liza Lapira, who played the neighbor down the hall in Don’t Trust the B—- in Apartment 23. 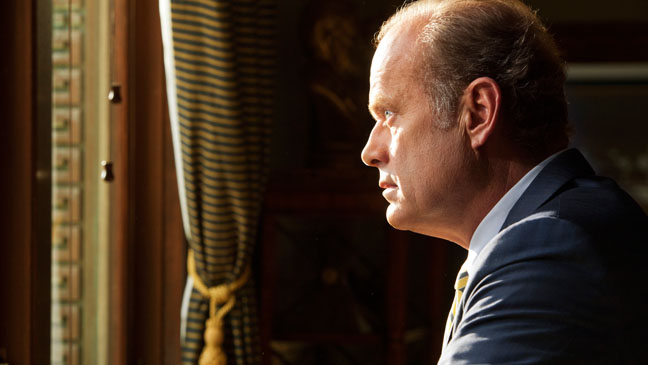 Boss — Boss is basically the Tommy Carcetti subplot in The Wire crossed with House of Cards, only its grimmer and darker than both series. It’s essentially Kelsey Grammer’s version of All the King’s Men using the Chicago political machine as the backdrop. Grammer plays Mayor Tom Kane, who not only controls Chicago, but the entire state of Illinois through insidious compromises, political corruption, graft, and even murder. He’s like the blisteringly angry version of Meryl Streep in The Devil Wears Prada. Kane is suffering from an incurable degenerative neurological disorder, similar to both Parkinson’s and Alzheimer’s that will eventually cost him the very thing that got him to where he is… his intellect. He has three to five years left to live, and those years will be plagued by memory loss, the shakes, and hallucinations until he’s completely reduced to a vegetable. Grammer is absolutely unholy in the role, easily the meatiest of his career. Within 10 minutes, you will completely forget this is the same guy that played Frasier Crane. Among the many reasons to watch it, his performance is the best.

The Good Guys — Nobody ever talks about The Good Guys, a pretty nifty action buddy-cop comedy that starring Bradley Whitford and Colin Hanks that Fox dumped on Friday nights during the summer. Whitford stars as a cop stuck in the past — he was an amazing detective in 1981, but refused to adapt to new technologies, like “smarty phones,” which he refers to as “cellular testicle-shrinkers.” His by-the-books partner is played by Hanks. There’s definitely some formulaic elements to it (it comes from Burn Notice creator Matt Nix), but it’s fun and silly, and Whitford is fantastic (and fantastically funny) in it. You could tell that it was the kind of show where everyone involved was having a great time, which makes it a perfect hangover show, or something to watch while you’re doing the laundry.