UPROXX Investigates: A Look At The Second Episode Of Comedy Central’s ‘Big Time In Hollywood, FL’

Ever since Jimmy Staats [Ben Stiller] was shot a million times to his death in the first episode of Comedy Central’s Big Time in Hollywood, FL, Jack and Ben [Alex Anfanger and Lenny Jacobson] have found themselves wrapped up in a lie they can’t escape.

Yet, their primary concern remains being forced to leave their parents’ nest. They express their concerns for their future in a short video to share with their loving parents [Stephen Tobolowsky and Kathy Baker]. Jack yells at them, “Soak it up because you are looking at my future, alright? Eating goulash and sucking some homeless guy’s dick.”

They have no choice but to continue their ruse of Ben being a drug addict, Staats being an evil drug dealer who deserved to die, and Del being raped by Staats. When put through the rigmarole of police investigation their lies are convincing. But when detective Jim Zdorkin [Marcus Giamatti] asks to speak to Del, the brothers know he could never convincingly keep up with all the lies. Especially considering that Del didn’t realize Staats actually died and thought he was just an insanely talented actor.

Jack proposes they just kill Del [Jon Bass] by gassing him in the garage. Ben opts for another plan, one that will keep him alive: direct Del to answer all of Jim’s queries with “I don’t recall.” But since Del can’t comply with the interrogator’s questions, Jim has no choice but to subject him to a rape kit test. Here is where we are introduced to the darling Darla [Betsy Sodaro], who administers the test. She is immediately taken aback by Del’s beauty and says to him, “Somebody order a rape kit?… I will be raping… rape kitting you.” The romantic seed has been planted.

Meanwhile Ben’s family still believes that he is a bona fide drug addict, leading to an intervention held by a former addict and drug counselor [Matt Besser]. The lies continue when they blame Del for dealing them crack cocaine, claiming he is the root of their problems. The mother is highly suspicious of Del. Ben is sent to rehab. And Jack still has to move out of the house.

The show’s creators and writers, Anfanger and Dan Schimpf, [who spoke with us previously about the making of their show] talk us through some special moments from the second episode.

DAN SCHIMPF: Those cold opens became a really big part of the show because it’s a good reminder, as the story progresses and becomes less specifically about the boys making movies, that the theme of cinema is throughout. It’s always there and is always tangible. Also, the cold opens are a much more fun and interesting way to tell the story sometimes.

ALEX ANFANGER: The rule with us is it always has to be connected. Even in the first few episodes, they are still linked to a character. So, for those, it’s the way for the boys to see their films being made. As long as it is tied to the story. But then it became a game to figure out, well, what’s the best way we can stylize a cold open and also have it relate to the episode as a whole?

SCHIMPF: Eventually, it’s fun to think of the cold opens as, is this a movie or is this real? Thematically, it’s something that’s really fun to play around with.

ANFANGER: If you like Del as a character now and Betsy [Sodaro], then you’re just going to freak out when you see the rest of the season.

SCHIMPF: They have great on-screen romance. And I say that trying to be as objective as possible. But what Jon [Bass] and Betsy bring to it, and how it transforms, and how it gives Del this unexpected depth later in the season is one of my personal favorite archs throughout the season. We planted that early on because it becomes such an integral part in the show.

ANFANGER: Interestingly, this is all thanks to Stuart [Cornfeld], our producer, we had Betsy come in for Del. Our brilliant casting directors were like, “We know that you wrote Del as a guy but we have this actress who we’re huge fans of that we think you need to see for the role of Del.” She came in and she was, hands down, one of the funniest people we saw.

SCHIMPF: We had the opportunity to work with Betsy on a different project, and she’s truly a comedic genius.

ANFANGER: We loved her, but we still felt like the role that we had written definitely needed to be played by a guy. And to change it to a girl would change the dynamic with the friends. It’s just really abusive, so if it was a girl, it changes things a little too much for us. And also with improv, I was there reading with the final group of people, and we improvised a lot in the auditions just to see what people were going to do. It instantly changed the dynamic. Even I could not be the same level of mean to Betsy. It just felt like it wasn’t working. There was a slightly different dynamic with Jack. But Stuart was absolutely obsessed with her and said, “I figured it out. She’s Del’s girlfriend.”

SCHIMPF: There are very few people who, in a room full of funny people, will make all those people laugh. Betsy is one of those people, she’s so brilliant and so much fun to work with and was so much fun to write for once we figured out that arch. It was undeniable how funny and great she was. We took it upon ourselves that she needs to exist in our universe. It pressed us to write something specifically for her. 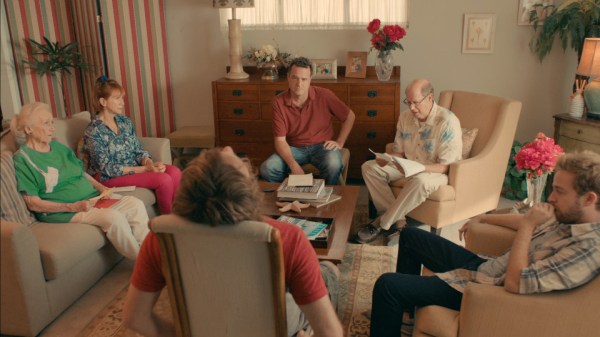 SCHIMPF: There are so many great improv artists in the show, it would be a shame to not let them feel it out and see if we can make improvements on the day or in a rehearsal before we actually do the scene. We like to have a free flowing environment. It’s a balance between what we wrote and a balance of how each actor’s interpreting it. And figuring out honestly how actors like to work. Some actors are not comfortable throwing stuff out there.

ANFANGER: We really like to tweak and change early on to fit an actor’s voice. If they do improv, that’s amazing, and we’ll let them riff on different scenes and figure stuff out.

SCHIMPF: The only thing we try to protect is, what is the theme of this scene as a whole? Where are these characters going from point A to point B in the scene? And then, beyond that, as long as they’re comfortable playing scenes in the mindset of their character, Alex and I are pretty liberal with how we arrive from a to b.

ANFANGER: Eventually, you start to write in the voice that the actor has developed with what you imagine the world to be.

SCHIMPF: Some actors are not comfortable throwing stuff out there. It’s all a careful balance between everybody working on it to find a comfortable place. You’re hopefully bringing out the best qualities in an actor so it feels comfortable and also succinct.

SCHIMPF: [There’s a] part of the [rape kit] scene that the world may never actually experience […] You can look through the mirror and see that Jon is very much blurred. When we’re shooting, Jon is completely naked in the real world. It may have been the hardest I’ve ever laughed, and seeing everyone else so desperately try not to laugh because he’s in the least flattering poses one can put themselves in. He’s bending over and pulling up his pants and sort of waddling and turning around just being completely nude. I’ll always have a distinctive memory of just trying really hard not to laugh while Jon is doing that, one of the funniest things I’ve ever seen.

ANFANGER: Oh my God, I agree. That was one of the most fun days of shooting.

SCHIMPF: And Jon, God bless his soul, is so willing to do it. I couldn’t do that. To be totally naked in front of everybody and in that pose and position. It’s so crazy. And I felt really bad for Marcus [Giamatti] and Betsy, who are conducting this very casual scene between themselves while that is going on behind them.

ANFANGER: It’s one of the funniest single shots. It’s so shocking and hilarious.

SCHIMPF: Unfortunately, because of the way things are, I don’t know that people will ever get to experience it like that, but I think about that moment.

Wondering what comes next? Check out Big Time in Hollywood, FL tomorrow (Wednesdays) at 10:30/9:30c on Comedy Central, but you can watch the first two episodes right away on the Comedy Central app, or for free online by clicking here.