It feels like there should be more television shows about Wall Street, right? Not necessarily because people are clamoring for them or anything, but more because Wall Street and Big Banks have been such a hot topic since the 2008 financial meltdown. You’d think dozens of people would have walked into pitch meetings between then and now and been all “Trent Galapagos is a young trader who’s making a name for himself at his investment bank, but he has a secret…” or “Bucky Sacramento is a Wall Street legend with the Midas touch, but he has a secret.” Or whatever. Maybe Dick Wolf could have made Chicago Wall Street in between his shows about every civil service in the city. I don’t know. It’s just strange, is all.

Which, conveniently, brings us to Billions, a new Showtime series from Rounders writers Brian Koppelman and David Levien and Wall Street reporter Andrew Ross Sorkin that focuses on the world of high finance.

The gist of Billions is as follows: Homeland veteran Damian Lewis plays Bobby “Axe” Axelrod, a big deal, big ego, big fleece-wearing hedge-fund manager who became the prince of New York after 9/11 thanks to a string of philanthropic endeavors. Paul Giamatti plays Chuck Rhoades, an undefeated blue blood U.S. attorney in Manhattan who is convinced Axe is up to something nefarious, somehow, and is dead set on bringing him down and revealing him as a sleazeball in front of the world. By the end of the pilot, the two of them are engaged in a game of billionaire cat-and-mouse, kind of like Tom & Jerry if Tom chased Jerry around with threats of criminal charges instead of a frying pan.

(If you work in Showtime’s marketing department, please feel free to use “Billions is kind of like Tom & Jerry if Tom chased Jerry around with threats of criminal charges instead of a frying pan” in your promotional materials.)

And all in all, it’s pretty good. Lewis is convincing as the fast-talking New York financial whiz, so much so that it almost makes you forget he is very, very British in real life. And Giamatti gives it the full Giamatti, all exasperated and hard-charging and red-faced-with-his-tie-loosened-and-top-button-unbuttoned. Both of their characters are Complicated, capital C, in the way main characters in prestige cable dramas often are. Axelrod has a gambler’s crippling need for action and a “because screw you” self-destructive streak that has apparently gotten him in trouble in the past, and will assuredly get him in trouble throughout the series. Rhoades has a, uh… sex… thing. I don’t know exactly what the protocol is for spoiler alerts for things that happen within the first two minutes of the first episode of a new television series, but this whole thing opens with a leather-clad woman urinating on his chest. So if you ever wanted to see a dominatrix pee on Paul Giamatti, Billions is the show for you. 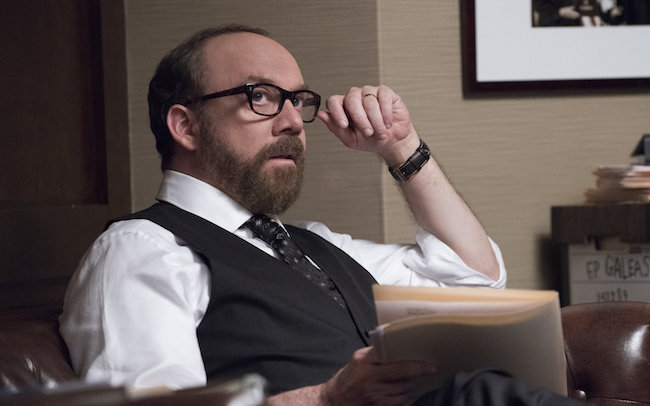 The best part of the series, however, at least through the handful of episodes I’ve seen, is Maggie Siff’s character, Wendy. The first episode takes a lot of pleasure in slowly revealing aspects of Wendy’s life through what I’ll call mini-twists, so I don’t want to lay it all out here and ruin anyone’s fun. What I will say is this: Wendy exists in a kind of personal/professional limbo between Bobby and Chuck, with each main character having a strong connection with her. Siff has always been excellent, most notably playing Rachel Menken on Mad Men and Tara Knowles on Sons of Anarchy, and the scenes with her save the show from just being two combative one-percent egomaniacs whaling away on each other because they needed an adversary to whale away on.

Other notable appearances: David Costible — who you may recognize as Gale from Breaking Bad or Daniel Hartman from Suits, depending what kind of cable dramas you prefer — as Bobby’s COO at the hedge fund, a character who is approximately 80 percent facial hair and cuss words, and who steals most of the scenes he’s in. And Malin Akerman (Watchmen, Childrens Hospital) plays Bobby’s tough-as-nails wife, a woman who, at one point, pulls a 9/11 widow aside to threaten her with a combination of harsh words and icy blue Swedish eyes. We like her. She’s fun.

Billions has a long way to go if it wants to be included with the types of television dramas that were name-checked in this review. It needs to clarify its purpose a bit, and figure out exactly what it wants to be. But even if it never gets beyond Lewis and Giamatti circling each other like fancy cobras, it’s still highly watchable. (And if you work at Showtime and want to hurry up and change the name of this show from Billions to Fancy Cobras, hey, my gift to you.)