‘But I Do Not Want To Watch Black Mirror’: A Short One-Act Play 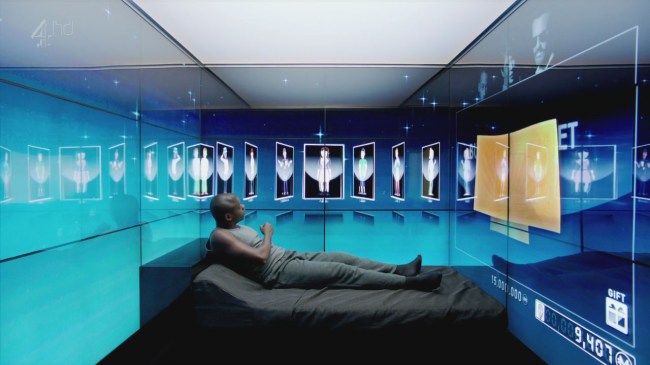 Two men enter a coffee shop. After ordering their drinks, they sit at a table in the corner. MAN 1 speaks first.

MAN 1: Have you seen Black Mirror?

MAN 1: You should watch Black Mirror.

MAN 2: Because I do not want to watch Black Mirror.

MAN 1: No, but you don’t get it. It’s not, like just weird and disturbing. You have to watch it. It’s this whole dystopian comment on the modern world and society’s increasing reliance on technology. It’s so, so good.

MAN 2: Because I do not want to watch a dystopian comment on the modern world and society’s increasing reliance on technology.

MAN 1: [getting very frustrated] But … you … I… well what do you want to watch then?

MAN 2: I want to watch lawyers get held in contempt for courtroom shenanigans. Or well-dressed criminals in speedboats being chased by well-dressed detectives in faster speedboats.

MAN 1: You mean to tell me you’d rather watch reruns of Miami Vice than a brand new, critically-acclaimed series like Black Mirror?

MAN 2: Because I would rather not devote hours of my free time to being creeped out by a paranoid take on society and how our current path could lead to an unsettling future. The real world is messed up and anxiety-inducing enough. I do not need television to supplement that for me in my free time. That’s just me, though. Also, I like Miami Vice.

MAN 1 sighs and shakes his head, flabbergasted. They continue drinking their coffee, changing the topic of discussion to the state of the local sports teams. MAN 1 will never look at MAN 2 the same way again.