Counterpoint: Meathead Rob Lowe Is Doing Pretty All Right For Himself!

We’ve met many iterations of Rob Lowe over the course of DirecTV’s surprisingly (unbelievably) long-running ad campaign. Most of them have been pitiful sorts, men whose entire sadsack existence is meant to illustrate the folly of choosing cable television over DirecTV. Creepy Rob Lowe hanging around the pool, Painfully Awkward Rob Lowe being a dweeb who can’t pee in public, Super Hairy Rob Lowe having what appears to be a revolting genetic condition, and so on. You don’t want to be these guys. That’s the gist.

All of which brings me to the most recent commercial, featuring Meathead Rob Lowe. I’m going to take an unpopular stance here, but just hear me out: Meathead Rob Lowe is doing pretty all right for himself!

Sure, Meathead Rob Lowe is kind of a douchebag. I don’t think I would particularly enjoy crossing paths with him in traffic, or while trying to get drinks from the bar at a popular beachfront night club, or almost anywhere, really. That’s me, though. The Venn Diagram of things Meathead Rob Lowe and I enjoy probably only overlaps in a tiny neon area with “The Fast & Furious movies” scribbled in the middle. But, I mean, taking this commercial just at face value, Meathead Rob Lowe seems pretty happy, right? He’s in good shape, he has hobbies he enjoys, and he’s probably too dumb to be concerned with most of the serious, depressing issues facing the world today. I bet he thinks Charlie Hebdo is the dude at his gym with the sick delts. Ignorance, bliss, etc.

Also, and more importantly, I don’t know exactly what Meathead Rob Lowe does for a living, but he appears to be making pretty good money. Look at his garage. 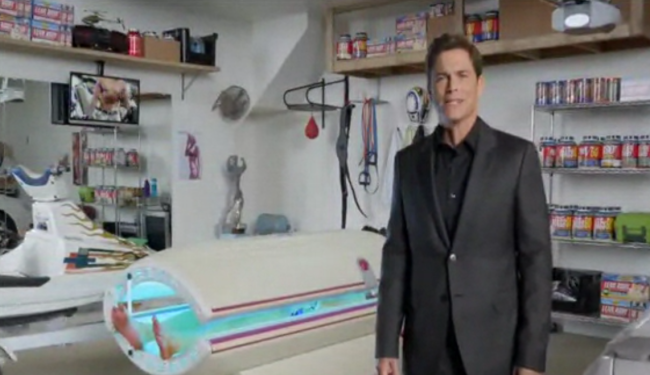 Dude has a spacious two-car garage that contains a car, a jet ski, his own personal tanning bed, half-a-GNC worth of expensive health supplement powders, and not one, but two flat screen televisions. Again, not what I’d want to do with my garage, but if that type of stuff is your creatine-laced cup of tea, that’s a pretty sweet setup. And his living room was huge, too. Not as nice and classy as Real Rob Lowe’s living room, but still! And why does Real Rob Lowe always have so many people over all the time? What is he trying to prove? Remember in Breaking Bad how Jesse always had people over to keep a party going so he could mask his depression? Is that what Real Rob Lowe is doing? Is Rob Lowe catastrophically depressed and using his celebrity status and satellite television package to hide it? Something to look out for going forward.

Anyway, the point I’m making: Meathead Rob Lowe appears to be a happy, wealthy doofus with a jet ski. You could do worse.