One of the most typical counter-argument of any protest of late, or possibly ever, is the love it or leave it defense. If you use your freedom of speech to question or raise awareness about an issue, you better not, because people have fought and died for the right for you to question, protest or raise awareness of said issue. Now stand up for them. This is an odd logic, and in some instances, can be described as complaining about complaining. This gets us nowhere. It’s a treadmill of disenchantment that’s run on the souls of strawman arguments. It’s pointless, but it gets clicks. At least, if Facebook wants you to see it.

Facebook’s algorithm may have shielded you from many pundits on the left or the right, depending on the media you consume on a daily basis. One of the people you may not have come across is the extremely popular right-wing talking head Tomi Lahren, whose videos are viewed tens of millions of times by everyone’s one uncle they have (you know the one).

Facebook is essentially guiding the news people want to see to their eyeballs. Some of it may not even pass off as news, and some timelines could be filled with nonsensical memes thanks to your mother-in-law.

Trevor Noah and The Daily show dives into the world of Tomi Lahren with both feet. At first, he’s reviled at Lahren’s use of free speech to complain about how people that are marginalized and targeted shouldn’t be using their free speech. But then, with Trevor uttering, “that is the least woke most awake person I’ve ever seen.” He falls in love. Tomi, you see, is so good at what she does and so full of passion, she has to be admired on some level. 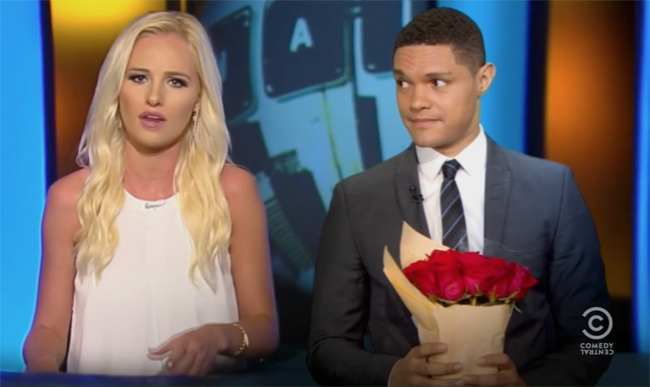 Alas, it would never work between the two, so we segue from a Facebook star to Facebook’s CEO, who is planning on curing all disease by the end of the century while possibly using ad revenue from Tomi Lahren’s videos. It’s the circle of life!