Did ‘The Good Wife’ Use Split-Screen For An Important Scene Because Two Stars Hate Each Other? 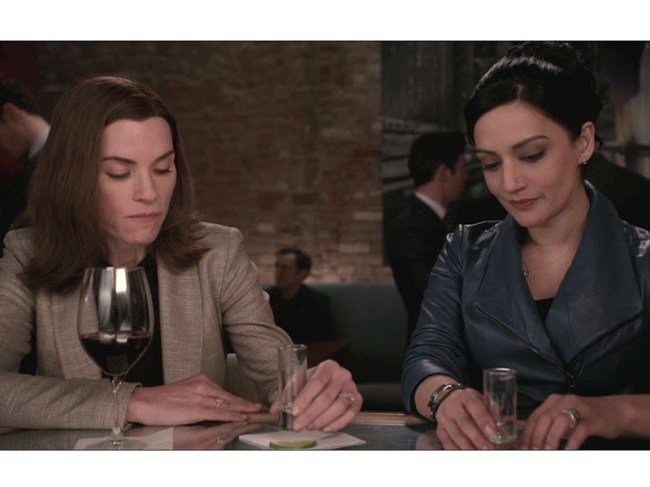 The Good Wife aired its season finale amid a crowded Sunday lineup last night, and while a few fans appear interested in discussing the merits of its season-long arcs about political campaigns and the difficulties of providing legal representation to fancy drug kingpins, most of the Good Wife-watching world has spent the majority of the day speculating about how much cast members hate each other and shouting “FAAAAAAAAAAAAAAAAAAAAKE” at their freeze-framed televisions.

Quick backstory: Rumors have been flying around for a few years that Julianna Margulies (who plays the lead character, Alicia Florrick) and Archie Panjabi (who plays an investigator named Kalinda Sharma) do not like each other. Like, at all.

The Washington Post went way deep into the evidence of this feud earlier today, but the short version, for our purposes, is that (1) the two actresses had not physically appeared in a scene together for about two and a half seasons, and (2) everyone involved — Margulies, Panjabi, and showrunners Michelle and Robert King — have been giving weird, cryptic non-denials when asked about it, like Panjabi telling EW, “I think that’s a question you need to ask the producers.”

Cut to last night’s finale. (Spoilers a-comin’.) Panjabi announced she was leaving the show a few months ago, so a chunk of the last few episodes had been about her character’s reason for exiting the Good Wife universe. (Drug dealer, cooperation with the government, getting the hell out of Dodge, etc.) Despite all that, and despite the fact that the two characters interacted a handful of times over the phone and through intermediaries (neither of which required the two to be in the same room), they still had not shared a goodbye scene.

So, that settles that.

Unless it does not settle that. A number of viewers have pointed out that the scene in question, with the two of them downing tequila shots at the bar, looked, to use a technical term, pretty dang split-screeny. And here’s another view that super does not clear up anything:

So, what is the takeaway here? Two things as far as I can tell: One, you can make a really smart, solid legal drama that airs on network television for six seasons, and people apparently won’t care very much until you maybe had to use editing trickery to doctor a scene because two of your stars allegedly hate each other so much that they refuse to be in the same room together for their characters’ goodbye.

And two, having the option of split-screening yourself together with a coworker you hate instead of actually sitting next to them seems nice. Let’s work on that one for the rest of us.