Friday Conversation: Give Us Your Netflix Binge-Watch Recommendations 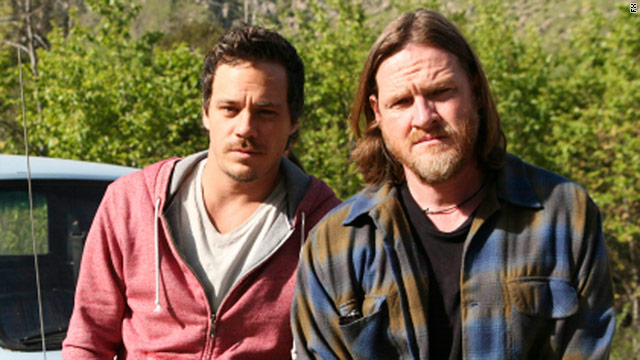 Earlier this week Dustin posted his updated and expanded rankings of television shows available on Netflix. It was fine list, useful and extremely thorough, even if I did end up having one or two tiny bones to pick with it (FRIENDS ABOVE 30 ROCK? I WILL KILL YOU IN THE STREET LIKE A DOG or something), and it serves as the jumping off point for this week’s Friday conversation: What show would you recommend binge-watching on Netflix? And don’t go straight to, like, Breaking Bad either. Everyone knows you should binge-watch Breaking Bad if you haven’t already. Go a step, or even a half-step, further. Get weird if you want to. This is a safe space.

Personally, I tipped my hand a bit a few weeks ago when I wrote about Peaky Blinders, which I pounded through at a rate that could not have been healthy. (Seriously, watch Peaky Blinders.) So instead of repeating something I just said recently, allow me to repeat something I’ve said for years: Terriers was a good show. It’s great for a quick binge-watch, too, because it only got one largely self-contained season before FX gave it the ax, so you can plow through the whole thing in one icy winter weekend. Who knows, maybe you’ll even end up like me, a bitter man clutching to a four-year-old grudge over a low-rated, critically-acclaimed television show’s cancellation. Something to look forward to.

Below, some picks from the UPROXX staff. Feel free to add yours in the comments.

Damages. The first several seasons are rare in the televised world these days with an abundance of genuine *gasp* moments that imbues almost every episode with a must-watch cliffhanger. Glenn Close is fantastically devilish and Rose Byrne plays a perfect opponent as they both aim to advance personal and professional goals through a mix of legal and illegal means. If you watch House of Cards, then think of this as that show but with lawyers instead of politicians.

Obviously, the first show that I usually mention is 30 Rock, because I’m constantly watching it. Seriously, I pay a Netflix fee so I can just keep watching this wonderful show over and over, but each time I do, I catch something new. It’s incredible. But I’ll get to that another day, and probably several more days after that. Right now, I’m recommending Psych, but not because I love it. I want people to binge watch it so they can see what a wonderful, quirky show it was for the first five seasons, and then share my sadness as the show goes from clever and fun to formulaic and simply something that exists. I hate watching good characters go to waste, and I want more people out there to know how great Shawn, Gus, Jules and Lassiter once were. I miss those days.

“It’s NEVER lupus.” Except for that one time it was actually lupus.

Sure, House, M.D. got redundant and the entire show’s plot can be summed up in one GIF, but whatever. It’s damn cold outside and I need fake, medical jargon to get me through the winter.

I binge-watched Luther over the holidays and I have no regrets. As far as binges go, it’s fairly manageable at only fourteen total episodes. Sh*t gets real dark after the first season and at one point I loudly screamed at something that happened in an episode. (*Side effects include wanting to make out with Idris Elba.)

I’m going to cheat a little bit here and go with a show that’s only available on Netflix via DVD: Pushing Daisies. It still pains me that this show only lasted 22 episodes. When I really stop and think about it, it actually hurts my heart a little, like the sadness one feels when someone young and talented dies in their prime. I literally felt in love with this show at times. It just made me so damn happy. It was also, in many mays, something of a muse for me. It was, and still is, unlike anything I’ve ever seen on television. Completely whimsical, mischievously clever, visually stunning and expertly written, Pushing Daisies — a show about a pie-maker (Lee Pace) who could bring people back to life with a simple touch — was a feast for the senses in just about every way. Finally, Pushing Daisies was on the pie train long before pies became the new cupcakes, so there’s that as well. I’m going to do everything I can to be there opening night when the Pushing Daisies musical finally hits the stage.

Sometime in the next month or so, right as my hunger for baseball reaches the height of its intensity before Spring Training comes to make everything better, I will surely spend the equivalent of a day of my life re-watching Ken Burns’ Baseball. The series isn’t as visually interesting as HBOs When It Was A Game and it’s lacking in the later chapters when Burns went back to it to look at the 90s and the 2000s — he’s clearly more interested in the game’s golden era — but that’s okay with me, since I actually prefer to re-learn about baseball in the 40s, 50s, 60s, and 70s. These are the eras that I grew up hearing about from my grandfather when I first began my training to be a massive baseball nerd, so it’s nice to hear names like Joe DiMaggio and Harmon Killebrew again.

I’m a pretty lazy person and that trait definitely extends to my binge-watching abilities. Sure I could spend a week of my life re-living every Rachel/Ross breakup on Friends or pretending I’m as sarcastic, witty and verbose as those damn Gilmore Girls, but logging 7 or 8 seasons of a show in a single sitting is a bit too much work for me, which is why The Fall is pretty perfect. Season 1 of the crime thriller only has five episodes and since Season 2 premieres later this month, now’s the perfect time to catch up with Jamie Dornan’s killer psychopath. The real reason I watch this show though is because of my admitted obsession with the brilliant bad ass that is Gillian Anderson. Watching her hunt down bad guys gives me so many X-Files feels.

A warning to all of those Fifty Shades fan girls out there though; yes, the future Christian Grey stars in this one and yes, you do get to see him half-naked and tying up women but I highly doubt they’re getting pleasure out of it and this show might just ruin any sexual fantasies you’ve been having.

Black Mirror. Technically, it’s possible to watch all six episodes in just 285 minutes. But that figure doesn’t include the hours you’ll spend in the fetal position, screaming some version of: “NO. OH F*CK. NO. F*CK NO.”

Peep Show. They’re delightfully wrong and it is like stepping into the head of the characters from Seinfeld. Also it moves quick, so that’s good for a binge.

OMG, have you guys heard about this show, Breaking Bad? Also, I strongly recommend watching any and all Adventure Time that’s available on Netflix Instant. It’s weird and wonderful and funny. Just like Breaking Bad. You HAVE to see it.