From Crowe To Crowder: The Definitive Ranking Of ‘Justified’ Villains 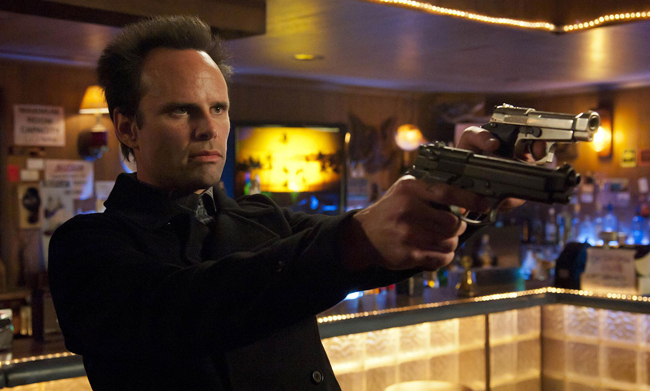 29. The Florida Crowes (Including Non-Crowe Jean-Baptiste)

The less said about the Florida branch of the Crowe crime family, the better, due mostly to Michael Rappaport’s attempt at a Southern accent, which came in at a solid 7 on the Frank Underwood Foghorn Leghorn Index. (Note: The FUFLI only goes to 5.) The nicest thing you can say about any of them is that at least Danny Crowe had the decency to die hilariously, which was appreciated and did not go unnoticed.

Gary, you incompetent boob. The only scam you pulled off that was worth 1/10 of a damn was convincing someone as attractive as Winona to marry you, and even that involved you getting periodically cuckolded by her strong silent ex, who took it upon himself to come over uninvited late at night whenever he pleased, locked doors be damned. It’s a miracle you made it as long as you did.

Lumping everyone together here even though it’s probably unfair to bring Cousin Johnny down to 26 with human anchor Wade Messer. It’s just, I mean, run down the list. Everyone associated with Boyd, from his own father to the lowliest eventual kidnapping victim he hires to tend bar this week, ends up dead, and sometimes they get smashed in the face with a skillet first. The only ones who have made it out alive — so far — are Ava and, somehow, Earl, and neither of them are in great shape.

The collection of Harlan’s wealthy string-pullers, most notably funeral home director and foreign bride enthusiast Lee Paxton, had a brief moment of glory turning the screws to Boyd before it all went to hell. I will never forgive them for not getting Boyd that Dairy Queen.

Wanted to rank them higher but then I remembered three things: One, Sammy Tonin ended up getting his brains blown out through the front of his face in a grimy dilapidated Detroit warehouse; two, Theo Tonin ended up getting arrested after Raylan and company found him cowering and riddled with bullets inside a crate; three, their racist money man Charles Monroe did that creepy thing where he choked out his girlfriend/maid. No thank you.

Blown to pieces in a Lexington hotel suite via tiny explosive hidden in a cigarette pack. Worth its own spot separate from the rest of the Detroit mob.

The two lesser Bennetts get buried in the 20s, not necessarily through any fault of their own (you could certainly argue for them to be higher and I wouldn’t put up too much of a fight). It’s more just that they pale in comparison to the rest of the Bennett clan. It’s not fair, really. But neither is life.

Randall was Bartender Lindsey’s meathead bare-knuckler brawler felon husband who wanted to pummel Raylan’s face and start a big cockfighting business, in no particular order. He was a big violent psychopath, but at least he was a little fun about it.

You know what? Tommy Bucks never got a fair shake. He got gunned down like five minutes into the pilot, depriving us of whatever full backstory he and Raylan had in Miami. I bet they had fun adventures. Fun enough to warrant getting shot in broad daylight in the middle of a high-end Miami eatery, at least. That’s worth something.

More like YODO, right? Get it? GET IT? Because he died!

Hot Rod’s muscle men played by real-life brothers Wood and Steve Harris didn’t have a hell of a lot to do on the show, but their periodic appearances allowed me to envision a world where Avon Barksdale escaped Baltimore and started working his way up from the bottom of the Kentucky underworld. That’s apparently enough to get you ranked above characters on the show who actually, like, did things. We ain’t doin’ science here.

Ty Walker, Choo-Choo, Sea Bass, and Boon. The first three got shuffled out of Harlan quickly, which was a shame because (a) Garrett Dillahunt and his beard could have made a great big bad if we had more time and (b) I only got to refer to Choo-Choo as “Hillbilly Khal Drogo” a few times before he met his very fitting demise. Boon gets thrown in with the rest of the crew for now only because I feel like I don’t quite know enough about him yet, but I reserve the right to catapult him into the Top 10 if he ends up doing something bonkers.

Fletcher “The Ice Pick” Nix was the original slick hat-wearing potential foil for Raylan, back when Boon was still terrorizing diner hipsters in Colorado (presumably). It did not end well for him. Also it’s just dawning on me what a hat-obsessed show Justified has been.

I’ll let Art take this one.

Colt gets his own non-Boyd-henchman slot because he was cool and kind of a train wreck and he gave Tim a nemesis for a while and he looked a little like Fat Mitch Hedberg. You could do a lot worse in a short-term villain.

PRO: Played by Mike O’Malley from GUTS. Killed a man in the Wynnebago. Correctly diagnosed Boyd as having an affliction that causes him to use 40 words where 4 will do.

CON: Murdered on a tarmac after getting outflanked by noted imbecile Sammy Tonin. Yes, Raylan set the plan in motion and watched carefully to make sure it didn’t get screwed up, but still. You can’t get killed by Sammy Tonin and expect to make the Top 10.

Would have been two, maybe three spots higher if Sam Elliott had shown up to the set with a mustache. I will never get over this. Neither should you.

Katherine Hale had this way of saying the most menacing things but still managing to sound sweeter than cake icing. Also, she killed someone with a handgun hidden in her purse. And she once served cocaine for dessert. Inside a fancy silver dining tray. And then she went out a stole a diamond tennis bracelet she could obviously afford, just for kicks. And she died in a knock-down drag-out motor home fracas. And she was a grandmother.

There is no good reason to put Mikey — sorry, Michael — this high. Wynn Duffy’s sidekick and possible lover (?) was basically a roided-out puppy dog whose biggest contribution prior to killing Katherine was informing her that Wynn “loves guac.” But he was a sweet big ol’ lug and I miss him dearly and IT’S MY LIST so in he goes.

On one hand, Quarles was by far the more interesting of the two, due to the breakneck downward spiral that saw him go from a put-together business oriented criminal to a pill-popping sadistic lunatic with a habit of chaining attractive young men to household fixtures and having his way with them physically until their blood splattered the walls.

On the other hand… is barnyard dirt, because it is no longer attached to the rest of Quarles’s arm thanks to Limehouse and his meat cleaver.

Let’s split the difference and call this a tie.

Dewey was a neo-Nazi simpleton pimp and murderer who thought he had four kidneys and would have believed he had 20 if you looked him in the eyes and promised him it was true. And yet… I kinda liked him? It’s complicated. Dewey was the kind of guy who would have grown up to work on the docks and have a family if all his childhood friends grew up to work on the docks and have families, but all of his friends grew up to be racist miscreants, so that was that for Dewey. All he wanted from life was an above ground pool with two naked ladies in it. Was that so wrong?

The relationship between Arlo and Raylan is the driving force for the entire show. It’s why Raylan is the way he is, and why he does things the way he does. So Arlo gets points for that, as he does for shouting “GET SOME” at the man who ambushed him in a prison barbershop.

It’s not that Dickie was some masterful villain. He really wasn’t. He super wasn’t. But he was completely insane and said lots of completely insane things and his hair was a glorious unwashed catastrophe that looked like something a group of fraternity brothers would do to a sleeping pledge. And that GIF up there is him answering a telephone. What a delightful man.

A slimy cockroach who loves women’s tennis, guacamole, surfing, and a nice even tan. He never should have come to Kentucky. He should be running a criminal enterprise from the penthouse suite of an exclusive resort in Acapulco. He’d be a king, as he was always supposed to be.

Margo Martindale won a much deserved Emmy for playing Mags. The character was basically Harlan’s stepmother, caring and protective at times, but also with the propensity to be cruel when it served her interests. Mags was the greatest. Now who wants a sip of her famous Apple Pie?

Could it be anyone else? Answer: No, it could not. Boyd has become an iconic television villain over these six seasons, full of eloquent speeches and evil intentions, and always with one eye on making some sort of big move. A lot of the credit for that goes to Walton Goggins, obviously, who plays Boyd with a gleeful kind of charisma you can’t put on a page, but the words he gets to say sure don’t hurt, either. The scenes with him and Raylan trading seemingly innocent lines that are dripping with nefarious context have always been the show’s best. The man is a total sociopath and a self-professed outlaw who has killed a lot of people, but he is also a treasure. I’ll miss him the most.