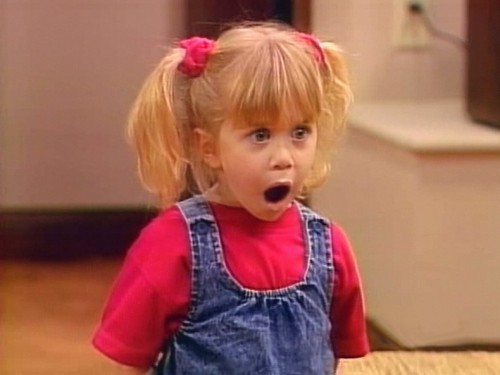 The Olsen twins have been busy lately, what with filling bowls with cigarettes, getting married (sans Bob Saget), and slowly backing away from reappearing as Michelle Tanner on the upcoming Full House revival on Netflix. Their confirmed absence from Fuller House has broken many a heart, including that of their TV dad, Saget, their TV uncle, John Stamos, and their TV fan, me. But as Saget himself explained, the twins couldn’t make it work because “they have a whole different creative life now.” And as Stamos explained, “I understand they’re in a different place.” In other words, it would seem the Olsen twins are in a different life/place, a place that precludes them from entering the Tanner household. So, where is that place?

As it turns out — both in real life and in the fictional universe that painstakingly maintains the fragile balance of the Tanners, even as time marches on and San Francisco rent soars mightily above their income levels — the Olsen twins are in the Big Apple running fashion. According to Us Weekly, Fuller House has explained away Michelle’s bizarre and unsettling absence by having the characters “mention that Michelle is now living in New York City and working on creating her fashion empire.” As such, our fair Michelle will be either too busy or too poor (depending on the success of said fashion empire) to take a five-hour flight to see her family, even during the goddamn holidays, or on the birthday of her devoted father, who’s not going to be around forever, you know. “Michelle’s…in New York,” Danny Tanner will gasp from his death bed, as D.J., Stephanie, and even Kimmy Gibbler, for some reason, weep silently at his side. “She’s working on creating her fashion empire.”

Michelle’s career choice and city of residence is “a not-too-subtle reference to the Olsen twins’ real lives,” adds Us Weekly, “as both reside in the Big Apple, where they head up such fashion lines as The Row and Elizabeth and James.” I’m going to go ahead and say that it’s also a bit of shade being thrown at the Olsen twins on the part of the cast and crew of Fuller House, who, just yesterday, were pausing scenes so that some poor schmuck could change the Olsen twins’ diapers and trying to fire them because they cried too much.

But wait! There’s more. Not only will Michelle never enter her childhood home again, but her family’s response to her perpetual ghosting will be to prank call her on a regular basis, which is both the saddest thing I’ve ever typed and the most incredible form of passive-aggressive familial warfare I’ve ever encountered. “One Fuller House episode,” explains Us, “features the series’ characters prank-calling Michelle by saying, ‘You got it, dude!'” For those who’ve forgotten, this was Michelle’s running catchphrase on the original series, which was undeniably the Olsen twins’ launching pad, without which they might never have found the capital or cultural cache to start their own billion-dollar fashion line. But it’s fine. They’re busy.

Now Watch: Why Nick Offerman Is The Perfect Whiskey Spokesperson