‘Game Of Thrones’ Theater: Imagined Conversations Based On The Promo Images For ‘The Door’

This week’s episode of Game of Thrones, the fifth of season six, is titled “The Door.” After all the fire-related goings-on last week, one imagines it will be quite eventful. However, going just by the official episode description…

Tyrion seeks a strange ally. Bran learns a great deal. Brienne goes on a mission. Arya is given a chance to prove herself.

Yeah, I got nothing. All of those could mean anything. So instead of taking this week’s collection of teaser photos from the episode and attempting to extrapolate any real plot points from them, I have again decided to use them to create goofy fictional conversations I wish the characters were having. As always, here to help.

NOTE: I’m not sure what the spoiler policy is for official images released by the network days before an episode airs, but some of these might tip off a few things the very, very sensitive among you might not want tipped off. Do not yell at me.

JAQEN: It has been a while since A Man has seen A Girl.

ARYA: It has been a while since A Girl has seen A Man.

JAQEN: What has A Girl been doing with herself since she got her eyes back?

ARYA: A Girl has continued serving the Many-Faced God.

JAQEN: Has A Girl seen The People v. O.J. Simpson yet?

ARYA: A Girl has not.

JAQEN: A Girl should. A Man enjoyed it.

ARYA: But isn’t it made by Ryan Murphy? A Girl was not a fan of Glee.

JAQEN: A Man felt the same. But then A Man watched it and it was incredible. A Girl must see John Travolta’s performance as Robert Shapiro.

ARYA: A Girl will attempt to binge-watch it this weekend.

JAQEN: A Man will be waiting to hear what A Girl thinks.

BRAN: … okay, I’m here. What am I supposed to be looking for? All I see is a bunch of snow and mountaOH GOD. WHO IS THAT? AAAAHHHHH. [rolls eyes back] WARG. WARG, DAMMIT. WARG INTO A DRAGON. WORK INTO A ROBOT. WARG INTO A BIG DRAGON ROBOT MADE OF VALYRIAN STEEL. WARG INTO… SOMETHING. ANYTHING! AAAAHHHH-…

[Bran returns to the tree]

THREE-EYED RAVEN: “Warg into a robot”?

BRAN: It was scary!

SANSA: You and Tormund…

SANSA: I saw you two making eyes at each other…

BRIENNE: We most certainly were not.

SANSA: Oooo Brienne has a crush on Tormund…

BRIENNE: Knights do not get “crushes,” Lady Stark.

SANSA: With all that red hair, I bet it looks like a grain silo on fire down there…

SANSA: Are you going to see your new boyfriend?

BRIENNE: [storming off] I… you… this is highly inappropriate!

KINVARA: Hello, my name is Kinvara. I am a new Red Woman, sent to pass along the message of the Lord of Light. If you’ll give me just a few minutes of your time, I’d like to say a few th-…

LARRY IN THE BACK ROW [shouting]: Hey, did you see that stuff Melisandre did with Jon Snow?

KINVARA: Did I… what?

LARRY IN THE BACK ROW: Yeah, she brought him back to life with the magic stuff you guys do.

LARRY IN THE BACK ROW: Can you do that?

KINVARA: I… I don’t know. But that’s not the point. The point is that the Lord of Li-…

LARRY IN THE BACK ROW: It was so friggin’ cool.

KINVARA: I’m sure it was. But if you’ll let me finish, I think you’ll-…

LARRY IN THE BACK ROW: Oh, my bad. Sorry. No more interruptions. Promise.

KINVARA: Thank you. Now, as I was saying, the Lord of L-…

LARRY IN THE BACK ROW: Hey, sorry, one last thing. If you take off that necklace, do you turn into a really old lady, too?

LITTLEFINGER: I guess I, uh…

LITTLEFINGER: … miscalculated a little with the Ramsa-…

LITTLEFINGER: I mean, the plan was good on paper, but…

SANSA: [now staring at wall so hard it is beginning to crack]

DAENERYS: … which is why we must act quickly.

DAARIO: Of course. But we have a little time, right?

DAARIO: It’s just… I noticed after the whole burning thing, when you were standing there… you could use a little tightening up.

DAARIO: Not a lot. Just a little. Maybe a few crunches or a little extra cardi-

DAENERYS: Wait. Are you trying to neg me?

DAARIO: What? No. I’m just saying you can, uh… [turns around, steals glance at notes he wrote on his hand while flipping through a pick-up artist book at Barnes and Noble]… uh…

DAENERYS: You do realize what happened to the last men who disrespected me, yes?

DAENERYS: Choose your next words wisely.

DAARIO: Okay, hang on. Hang on. I have something to show you.

DAENERYS: I do not have time for the games, Daari-… wait, are you wearing goggles now? 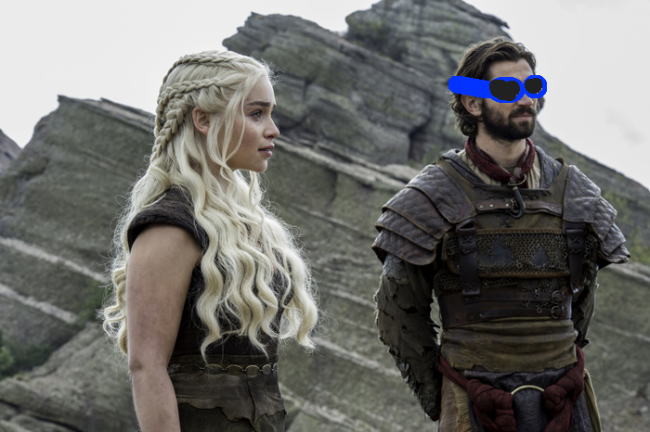