How Will ‘Mad Men’ End? The Season Premiere Offers Clues In The Lives Not Lived

“That’s not a coincidence. It’s a sign of a life not lived,” Ken tells Don late in “Severance,” the 7B premiere of Mad Men. Lives not lived is the overriding theme of an episode that also features the return of Rachel Menken (Maggie Siff) in a dream sequence the night before Don finds out that she’s died of leukemia. Rachel — who died young, but who lived a happy life (as we learn from her sister) — gets Don wondering about his life not lived. What would’ve happened in 1962 if Don had followed through on his plan to leave his wife, his kids, and his job and move to Los Angeles with Menken? What kind of life would that have been?

It’s April 1970 when Mad Men picks up again (April 30 is the date of the speech that Nixon delivers in the background of one scene). It’s been 10 months since the events of last season. The McCann Erickson deal has gone through, and Roger, Pete, Ted, Joan and Don are “filthy rich.” Peggy is still single and looking. Roger is rocking a bad ’70s moustache. Pete has millions coming, but he can only see the downside (“I may have to buy an apartment in the city!”). Joan has everything she could possibly want, except what she wants most of all, the respect of men. Meanwhile, Don has reclaimed his position at the head of creative. He’s still in the midst of his divorce from Megan, but he’s prowling again, sleeping with a series of beautiful women. As is almost always the case with Don and his mistresses, they’re empty, meaningless relationships.

But there’s something missing, not just for Don, but with the other core characters, as well. They all seemed to have reached the pinnacles of their careers (or are heading there), and yet, something seems to lack. “Is that all there is?” Peggy Lee sings in a song that bookends the episode. Did Don take a dead man’s identity, go through two divorces, rise to the top of his company, resurface from the deepest downward spiral of his career, and reclaim his position atop an even bigger firm for this?

Is that it? He seems to be thinking. Everything in his life has led him toward another series of random encounters and the mundane drudgery of advertising? Where is true happiness? Is Don even capable of it? What’s missing?

He’s missing love, that exhilarating puppy-dog love that Don had in the beginning with Megan. They’re all missing love, in fact. Matthew Weiner’s story, like the story that Ken’s wife wants him to write, is one of sadness and sweetness. A decade and too many relationships to count removed from the first episode of Mad Men, and the core of the series — Don, Peggy, Pete, Joan, and Roger — are all single (the status of the sixth core member, Betty, is still unknown). They’re still in search of someone to love, of someone who will love them.

At this point in the series, as they embark on a new decade having achieved most to of their career goals, they’re all looking around and realizing that maybe this is not what they had in mind for their lives. Peggy has never had a vacation, and it takes only a few drinks for her to realize what’s missing in her life, to be swept off her feet by a man who adores her for who she is, fearless and bold. (It doesn’t hurt that it’s Brian Krakow.) Joan just wants to be respected for her abilities, and yet, she continues to use her beauty as a crutch. Roger? Who knows? He’s the static figure of Mad Men. Years come and go, ad agencies are bought and merged, but Roger? He’s just Roger. He probably will be until the end.

“Look at yourself. Do you like what you see?” Don says to a woman auditioning for a commercial in the beginning of the episode. He could very well be talking about himself, and the fur is just the identity he’s wearing over Dick Whitman.

If you want to know how Mad Men will end, ask yourself this: What does Don Draper want in his life? What is he missing? After six and a half seasons, we still don’t know exactly, except that — like Joan and Peggy — he wants to be respected and appreciated for who he truly is: The son of an alcoholic father and a Illinois sex worker mother. Will that search bring him back to Megan? Or could it bring him back to Faye, the woman who loved him for who he really is but who he rejected for Megan? And if given the choice between what he wants and what he knows, will he take a risk? Or, like Ken, will he continue to push aside his dreams and settle for well enough?

— Don’s vision of Rachel after she died is in keeping with the series’ recurring motifs. He also saw visions of Anna Draper, his half brother, and of Bert after they died. You do NOT want to be in a Don Draper vision.

— Don’s talking openly about his childhood as Dick Whitman. He’s not ashamed of his past anymore. He’s owning it.

— “You’re filthy rich. You don’t have to do anything you don’t want to do,” Peggy tells Joan in that elevator scene. Remember that line, because it may be ringing in Joan’s mind the next time some sleazebag clients sexually harass her.

— Conspiracy theory notes: One of Don’s mistresses, Tricia, is a flight attendant on TWA, if you’re still on the “Mad Men ends with a plane crash” theory (the spilled red wine may also hint at a morbid conclusion, but it’s more likely just misdirection). Also, the waitress’ name is Di because of course it is. She’s played the Elizabeth Reaser, and though she looks like every other mistress of Don’s (Rachel Menken, in particular), she hasn’t been on the series before. 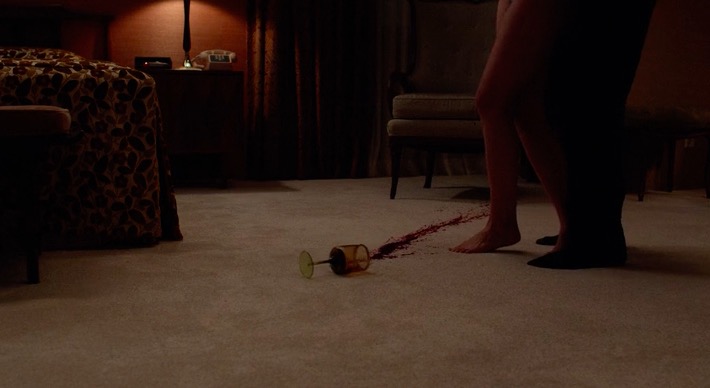