HBO has, once again, declined to release a title for tonight’s episode of Game of Thrones, let alone a plot synopsis. But the brief teaser that followed last week’s premiere revealed that: Jaime Lannister made a huge mistake in returning to Winterfell for the first time since season one. Pretty much everyone there wants him dead, and not just because he’s a Lannister in Stark (and now Targaryen) country. But who wants him dead the most? Note: I’m only including participants who are currently in the North, meaning Cersei — who’s none too pleased with her gold-handed twin brother — doesn’t count.

Bran should rank higher, considering Jaime pushed him out a window in the first episode of the series, but to paraphrase Tommy Chong, Bran’s not here, man. (Am I writing this on 4/20? Yes, yes I am.) He’s the Three-Eyed Raven and revenge isn’t on his mind; if anything, he might be Jaime’s best shot at making it out of the episode alive, considering he’s the one who knows that Jaime was right to kill Aerys II Targaryen. The Raven is also likely to believe the Kingslayer when he pleads that he’s there to help (he learned that Cersei’s plan to join forces with the Starks/Targaryens against the Army of the Dead was all a ruse).

Look, I love Jaime. He’s one of my favorite characters on the show. He’s morally complex and mighty handsome, both of which are important attributes to me. But if Sunday’s episode — the 69th episode of the show — ended with Jaime getting off the hook, only for Ghost to make his grand return and maul the Kingslayer as justice for Grey Wind, well, that would be nice. Did Jaime harm Grey Wind? No, but I miss Ghost, and having Jon kill Jaime is boring.

Arya’s “kill list” has, at times, included the names Cersei Lannister, Cersei’s father Tywin, Cersei’s son Joffrey, and Cersei’s personal bodyguard Gregor “The Mountain” Clegane. You might say Arya isn’t a fan of that family, and with Jaime coming to town, who knows what she’ll to do? (Especially if what he did to Bran gets out.) It’s been all of two episodes since she’s stabbed someone or slit their throat! That’s an eternity for Assassin Arya. (It would also confirm a popular fan-theory that Arya will kill Jaime, wear his face, then kill Cersei, too, completing the “Valonqar” prophecy in the process. Neat, but unlikely.)

Olenna Tyrell was the only one to voice post-season one Sansa’s thoughts on Joffrey — he’s “a c*nt” — so news of her death, via poisoning by Jaime, probably wasn’t well received by the Lady of Winterfell. Jaime’s already on her sh*t list (no less menacing than Arya’s “kill list”) for killing her dad’s Captain of the Guards and confidant Jory Cassel, not to mention that whole “the Lannisters send their regards” thing. Sansa, who’s suffered (Cersei) and learned (Cersei again) from some of the smartest characters on Thrones, doesn’t trust Daenerys, the Seven Kingdoms’ supposed savior — why would she trust Jaime? (If she wanted to, Sansa could easily rile up the other Northern lords, like Lyanna Mormont, against Jaime after Jon lost their faith by bringing in an outsider.) A Lannister in House Stark’s court is a dicey proposition.

If anyone’s going to kill Jaime this episode (I should note: I don’t think he will die … yet; characters on Game of Thrones seeking redemption usually don’t have happy endings), it’s Daenerys Targaryen. Jaime killed her father (breaking an oath in the process) and attempted to kill her and her precious dragon in the Loot Train Attack, but what’s working the least in his favor is that she’s been acting a little a “psychopathic” lately, including murdering the Tarlys for refusing to bend the knee. Daenerys is a “shoot first and ask questions later” kind of ruler (but replace “shoot” with “have your dragons blast fire”), and her patience may quickly run out for the man that her brother Viserys taught her to hate. 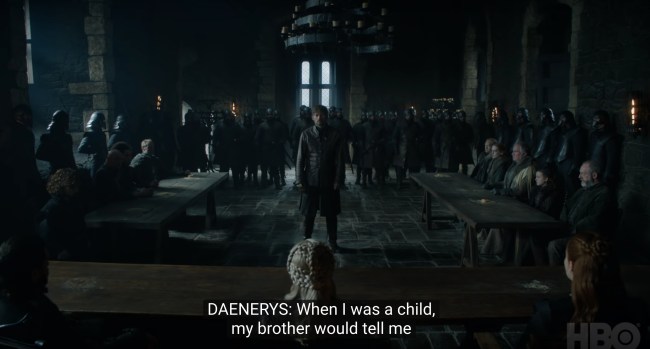 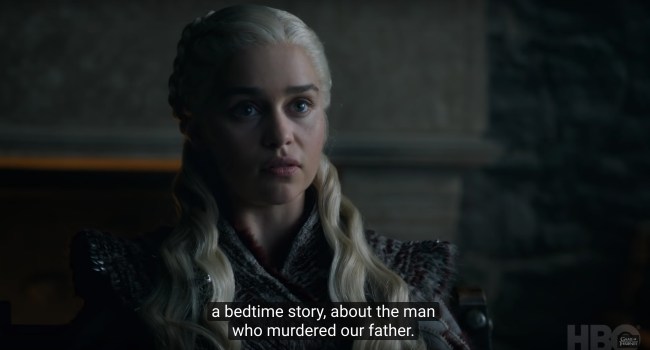