‘Is That All There Is?’ All The ‘Mad Men’ Callbacks You May Have Missed From The 7B Season Premiere

We’re not quite ready to let go of this week’s 7B premiere of Mad Men, as we head toward the last six episodes of the series. As Matthew Weiner heads toward the finish line, he’s obviously collected clues from past episodes and past seasons to inform where the characters are now. A lot has changed, but a lot has remained the same, and the core characters are dealing with similar issues they had in earlier seasons.

To what purpose they serve, we do not yet know, but it’s always fun to spot the callbacks in a Mad Men episode. Here are 10 from this week’s premiere:

1. Rachel Menken, of course, is a callback onto her own, and in seeing a vision of her after she died, it continued Don Draper’s pattern of seeing visions of people after they had died (see also: Bert Cooper, Anna Draper, and his half brother).

2. Don Draper had called Rachel Menken to get some advice on “nylons,” a callback to the pilot episode, in which Don explained to Rachel Menken why she hadn’t fallen in love yet. “The reason you haven’t felt it is because it doesn’t exist. What you call love was invented by guys like me, to sell nylons.”

3. The fur coat worn by Andie MacDowell’s daughter in the opening scene was a callback to Don’s profession before he sold advertising: A fur coat salesman. That’s where Roger discovered him. (via Henry Halloway)

4. Tricia, the TWA stewardess that Don slept with in the episode, is the same Tricia from episode two of the season that said to Don, as he was getting on the plane to go to Los Angeles to surprise his wife, “I’ve said it before, but I am so jealous of her.”

5. The way that Don mistook Di — the waitress — for someone he knew was eerily similar to the way he mistook Emily Arnett (the blonde prostitute from the first half of the season) for Anna Draper. Could it have been Midge, and does that portend the reappearance of Rosemarie Dewitt’s character?

6. In case you didn’t catch it, when the salesgirl told Joan that she had remembered her working at the department store, and Joan had told her that she was confusing her for someone else, she was lying. Joan did, indeed, work there (the department store is Bonwit Teller). 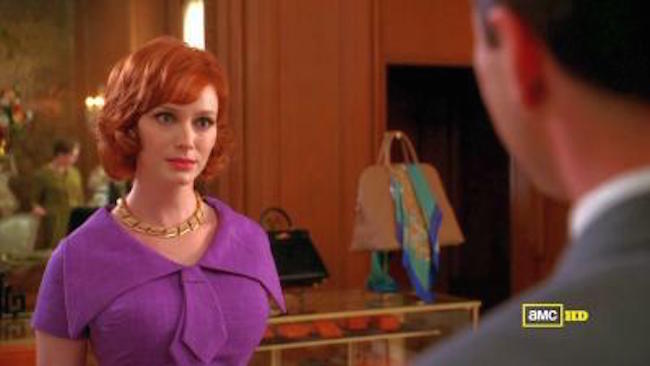 7. The way that Tricia — the stewardess — spilled the wine and bent over to pick it up echoed how Megan bent over to clean up spilled win after Don’s 40th birthday party. (via Cinefiles)

8. When Peggy says to Mathis, “If you want a raise, stop acting like a secretary,” she’s parroting the words of Don from earlier in the series when Peggy asked him for a raise.

9. When Peggy suggested to Steve that they run away to Paris together, that’s precisely what Don told Midge after a big bonus check. (via the Atlantic)

10. Finally, and of course, the Peggy Lee song, “Is That All There Is?” was not only the song that Matthew Weiner originally conceived as the Mad Men theme song, but the sentiment has been a running refrain throughout the entire series.