U.S. President Donald Trump. It’s a prospect once infamously predicted by The Simpsons and is looming increasingly large as a very real non-cartoon possibility. Yes, just like the temporary popularity boom of ventriloquism and Apple goofing something up on your mobile device, the sunny berg of Springfield has gotten a fair bit of credit for seeing this coming. Granted, Trump has more than a touch of Democrat Joe Quimby in him, but he does seem to tick the box of appealing to those that secretly long for a cold-hearted Republican to lower taxes, brutalize criminals, and rule them like a king. To use Sideshow Bob terminology, anyway.

Dan Greaney, the writer of the episode that plunked Lisa Simpson next in the presidential order after Trump, has weighed in with his thoughts on the Simpsons/Trump connection and now series creator Matt Groening has provided his perspective on the matter. Interviewed by TMZ while presumably waiting for a ride from the airport, the iconic cartoonist fielded some questions about Trump’s Springfield status.

“Everything we predict on the show comes true,” noted Groening in a semi-facetious tone. He didn’t answer TMZ’s question about potentially taking the “Bart To The Future” episode out of circulation if Trump becomes commander-in-chief, but he did address if he’d be game to have Trump on a future episode.

“I doubt it. I doubt we could come up with something he’d be willing to say… He’d say a lot, but I doubt it.”

Groening also shared that he thinks it would be “unlikely” that Trump takes the office of President. Of course, continuing down the Simpsons prediction rabbit hole, there’s always a chance we could have an unlikely third candidate. 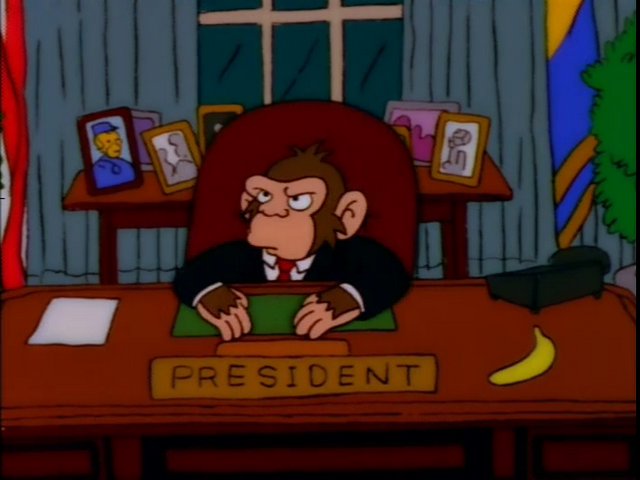