Have You Heard The One Where Matthew Perry And Courteney Cox Are Maybe Dating Right Now? 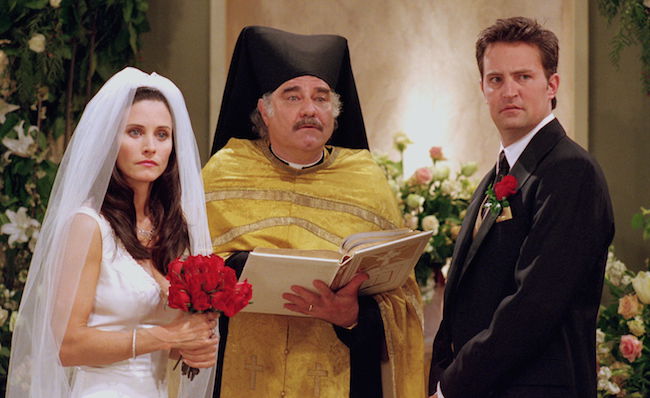 Friends has been over for what seems like forever (::sob::), but revelations about the show and its cast keep coming and coming. If it’s not the fact that some of the core performers weren’t invited to Jennifer Aniston’s wedding, it’s the earth-shattering news that Jennifer Aniston was completely replaced by an impostor in one episode. With all that drama, could there be a bombshell so big it would rock the world of Friends fans everywhere? Yes. Because Chandler and Monica–the best married couple on the show–may be dating in real life.

According to Perez Hilton, Matthew Perry and Courteney Cox have been spotted having lunch together recently. That’s all well and good–people have lunch together all the time, right?–but the Friends fans who witnessed the momentous occasion report that the duo looked like a couple more than they did just some very good friends. And considering that they played a pair of very neurotic (but also very funny) lovebirds for so long, couldn’t it be possible that they were secretly in love the whole time?

“It’s no surprise that Matthew was one of the first people Courteney called after Johnny left her. They’ve leaned on each other before — during her infertility struggle and his battle with addiction.”

According to Hilton’s sources, who are, of course, anonymous, the pair have been “hooking up” but aren’t in a rush to put any labels on the love that would send super fans into an orgiastic frenzy. What could be better than the happiest couple on the show being the happiest couple in real life? Well, there could be one thing, but despite my regular letters to the networks, no one’s giving Ross’ monkey a show of its own.

What do you think? Real couple alert or some very, very wishful thinking?