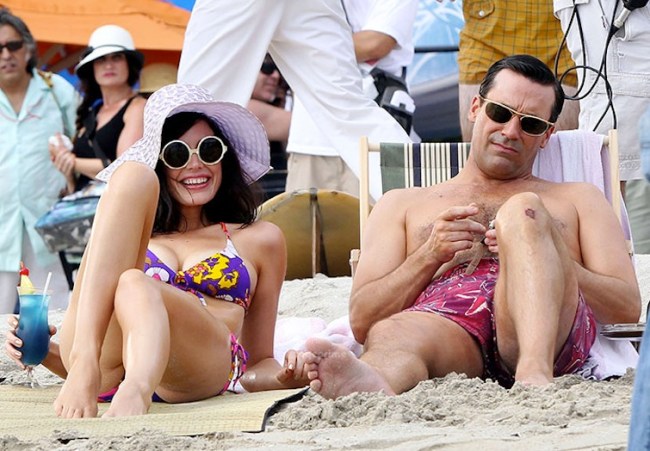 Sorry, conspiracy nuts. Mad Men is most likely not ending in the blaze of historical “oh snap!” moments the way you’d hoped. Hit Fix’s Daniel Fienberg spoke to showrunner Matthew Weiner and asked him which audience reactions were most surprising to him:

“I can tell you one of them,” Weiner said. “When you end an episode with Betty on a plane to get a divorce with her new beau and Don moving out of his apartment and getting a place, the kids by themselves, and the question that I get the entire time is, ‘Are Don and Betty getting back together? Like what’s going to happen with their marriage?’ It’s… part of the reason there was some controversy, I guess, to some degree about when Lane committed suicide, about showing his body, and that was a response to learning what I learned about the audience, which is that, if you do not see that man, no one’s going to believe he’s dead. They will not believe it. They will be like, ‘All right. When is where did Lane go? Does D.B. Cooper have an English accent?’ So I am a television viewer, and I take a lot of my cues, as all viewers do, from the information I’m given, and then there’s the Rorschach Test about me. What I think, what I say, and I get that a lot from hearing people talk about it. That’s always a surprise to me is people’s hope for what will happen in the story.”

He then continued, dashing thoughts of a Manson-infused ending for Mrs. Draper:

“[Y]ou get in this weird situation the first season where people were like, ‘I know Don Draper’s secret. He’s Jewish.’ And I was like, ‘Did I ever put anything in there that said he wasn’t?’ Because he’s not. I mean, I know that. And the Sharon Tate thing, you know, it’s so flimsy and thin, and at the same time, I’m like, ‘Wow, that’s a lot of coincidence.’ I don’t know what to tell you. I would like to think that people would know that the show’s striving for historical accuracy that I would not add a person who was not murdered by the Manson family into that murder. So that in itself is the dumbest argument in the world for me. But I love that people have conspiracy theories, that they have all this other stuff, and I don’t know what to tell you. I immerse myself in ’60s culture from a literary and historical point of view. I’m not a historian. Maybe some of the stuff is just happening, you know.”

As you may recall, this Megan Draper is/is a character similar to Sharon Tate theory was widely popularized by none other than our own Dustin Rowles, who first posted about the connections between case and character uncovered on Reddit, followed by a list of connective evidence  and continued Mansonesque happenings that proved the show may have just started trolling us at a certain point.

Why is Weiner so ready to dismiss the theory posited by Dustin and the Redditors? Because they got too close. They were going to crack this thing wide open, so they had to be snuffed out. Shame, really.  They will be remembered as visionaries. And other things too, probably — they’re not actually dead. Just their theory. The D.B. Cooper one, though? Still in play.