Why let a little thing like a summer vacation stop Weekend Update from chugging along? As promised, SNL‘s Michael Che and Colin Jost are in Cleveland for the RNC and they’re not just there for the free mustard. (GET THAT MUSTARD, BRET BAIER!) In a segment broadcast on Today, the duo hit the streets to interact with the RNC area rabble for a fun slice of man-on-the-street political yuk-em-ups.

Che and Jost flexed their comedy journalism muscles by lugging microphones around and asking hard-hitting questions. Well, maybe not “hard-hitting,” but they definitely managed to shine a light on some of the dynamics of this year’s heated election. Armed with a collection of six photos of old white dudes, the hosts presented a number of different interview subjects with a pretty straightforward question for GOP supporters: “Can you tell us which one is Mike Pence?” Here’s a screencap below, so you can play along from home and possibly win the prize of intellectual smugness. Maybe you’ll do better than the people featured. 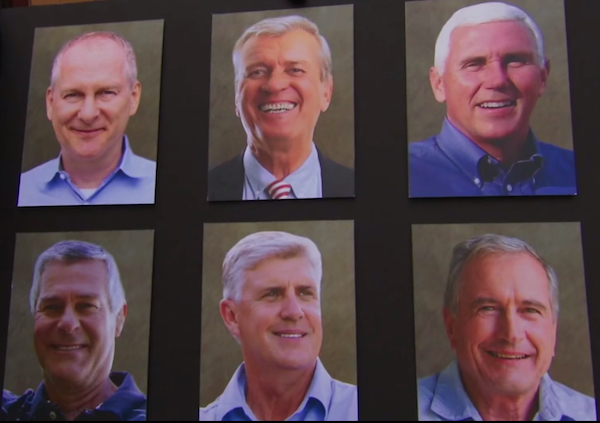 To be fair, the blame for the lack of recognition is partially on Mike Pence. He could use a Pokémon Go neck tattoo or a decorative eyepatch to really stand out.

We have Che and Jost’s clip nestled at the top of the page for your viewing pleasure. Take caution, impressions are occasionally involved.