What’s Working And What Needs Work On AMC’s ‘Preacher’

I snoop around on Twitter and Reddit after each episode of Preacher to get a sense of what viewers of the AMC series are thinking, and so far, it’s decidedly mixed. For the most part, those who haven’t read Garth Ennis’ source material are high on the series, intrigued by the mysterious (and often confusing) storylines, and in love with a few characters. Those who have read the comics, on the other hand, tend to be frustrated to outright hostile with the adaptation.

For comics readers, the frustration is understandable. Preacher bears little resemblance to the comics, except in the broad strokes. The names and professions are the same, in most cases, but some of the departures from the comics are vexatious to some. Comics readers, however, need to understand that the first season of Preacher acts as something of a prequel to the source material. The show is doing what the comic never really needed to do: Laying groundwork, developing characters, and setting up storylines that will pay off down the road.

Still, for even the vast majority of viewers who have not read the comics, some things are working better than others.

Joseph Gilgun’s depiction of Cassidy, so far, has stolen the show. He’s been able to provide the necessary comic relief, and he drops at least one brilliantly funny line in each episode.

"What were u smokin?"
"Attic insulation, mostly…"
Lord, if Cassidy wasn't dead, he'd be DEAD!#Preacher#HePreachin

Showrunner Sam Catlin is also effectively using Cassidy to help bring along the storyline with Fiore and DeBlanc, create some comic tension between Emily and Jesse, and exercise Seth Rogen’s obsession with drugs. In this week’s episode, Cassidy also brings Tulip into the series from another angle, which is absolutely necessary for her character, who has been drifting.

We are also going to get some more answers next week about Cassidy’s weaknesses as a vampire.

It doesn’t bear much resemblance to the comics, but Odin Quincannon’s storyline is breathing a lot of mystery into the series, setting up a conspiracy that needs to be cracked. Jackie Earle Haley is also killing it. We may have solved what’s going on with the sinkholes and the mystery behind the meat processing, but Odin’s conversion to Christianity may upend that storyline to some degree. What happens with Odin in the next few episodes may also determine whether Jesse continues to trust in God or whether Jesse turns against the Lord and starts to seek answers, which could lead him away from Annville.

Dominic Cooper is doing an excellent job of selling the character as written, but the way he’s written doesn’t always work. The Preacher we met in the pilot episode was great: He was tortured, uncertain, and dark. What we’re missing is that wry grin he offered when he beat the hell out of Donnie Schenck in the opening episode, suggesting that the “old” Jesse with the criminal past was still lurking beneath the surface. The Jesse from the comics would not have had any misgivings about beating the hell out of a pedophile, either, and he wouldn’t have been so determined to build a congregation. He’d be too busy drinking.

That said, I think I understand where Sam Catlin is going with Jesse. He has to build Jesse’s faith in God in order to take it away, and Preacher isn’t Preacher unless that character is asking questions, expressing doubts, and working against God.

However, I have some serious doubts about what they’re doing with Jesse’s father, John Custer. John was a huge source of inspiration for Jesse in the comics, and here, they’re turning him into an asshole.

I am mostly mixed on these two characters because I have no idea where the series is going with them. Root is clearly troubled by the darkness of the world — and Jesse’s sermon in last night’s episode was speaking to him — but it’s hard to know where his character is going. Some of the townspeople think he’s a murderer, his wife is practically in a state of catatonia, and his relationship with Eugene is unclear. Meanwhile, we still don’t know why Arseface tried to take his own life, or what’s up with Arseface’s own crisis of faith. Honestly, we just haven’t seen much of Arseface yet, and that character could use a lot more fleshing out, because he’s meant to be a fan favorite. 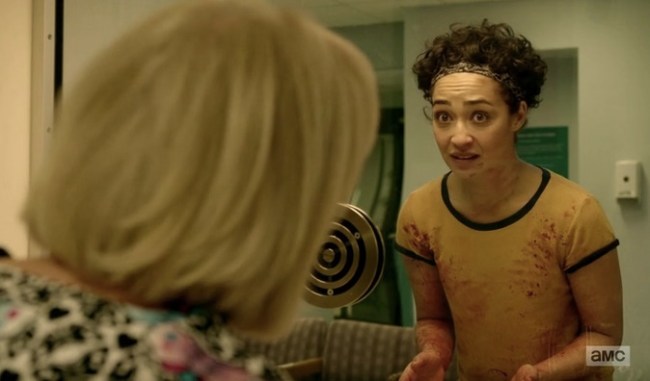 Tulip’s first sequence in the pilot — where she beat the hell out of a guy in her car, and took down a helicopter with homemade explosives — promised a kick-ass, takes-no-sh*t heroine. She’s been largely sidelined since, and until she threw Cassidy out a window in this week’s episode, not a particularly engaging character. She should improve as a the series progresses, and as she starts to work with Cassidy and bring in the other major villain, Herr Starr. Her irritation with Clive and Odin in last night’s episode also suggests that she may be instrumental in uncovering the conspiracy involving Odin and the sinkholes. I know Preacher is working a slow burn, but the sooner the series brings Tulip, Cassidy, and Jesse all together at once, the sooner it will take off.

I was excited, at first, that the series had grounded these angels into the real world as government agents, but they seem to be slowing things down, stewing in a hotel room waiting for something to happen. The phone call they received from Heaven should finally help push those characters along and help us to better understand the power Jesse Custer possesses. Right now, however, the characters aren’t unlikable enough to be villains or likable enough to good guys. There’s nothing wrong with shades of grey, of course, but these guys are bland and stagnant.

The Saint of Killers

Emily was a series-created character, and thus far, has proven unnecessary. I am guessing that, at some point, Mayor Person stops being Mr. Nice Guy and turns on Emily, which will require that Jesse step in. Right now, however, all she is offering is a pair of doe eyes and skepticism.