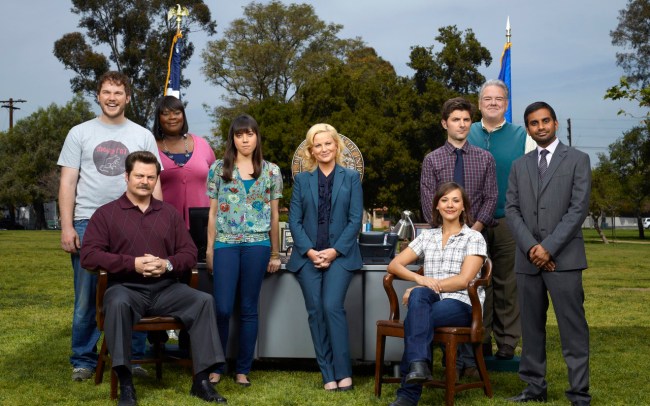 Parks and Recreation ends its seven season run tomorrow night with an hour-long episode titled “One Last Ride.” This is unacceptable. The show has been so good for so long, and so extra good in its abbreviated final season, that it seems almost cruel to take it away. Hopefully, there’s some alternate universe where it just keeps churning out high-quality episodes in perpetuity. Hopefully, we find that alternate universe one day. Hopefully there’s pizza.

Until that happens, we need to deal with the reality that the show is ending. And what better way to do so than to round up all of our favorite moments as a tribute? Below, you’ll find selections from the UPROXX staff. Please feel free to share yours in the comments. Choosing one is basically an impossible task.

As for me, and this is probably a primo example of recency bias, my favorite moment was Leslie and Ron’s “breakfast food” callback from the final season:

The thing I loved most about Parks and Rec is that it made you feel good while making you laugh. It was just, like, nice, which really stood out in a time when lots of comedy is being mined from awkward moments and cynicism. And you cared about the characters. There have been more eye-watering moments in this show than there are in most dramas. But even saying all that, it wasn’t sappy or saccharine, either. It was a profoundly silly show, first and foremost. The best comparison you can make is The Simpsons, really, both in tone and the way it developed an entire community of lovable lunatics — Perd Hapley, Jean Ralphio, Councilman Jamm, Ethel Beavers, etc. etc. etc. — around the main cast. I don’t know if there’s a higher compliment I can give.

Beyond Ron Swanson’s awesomeness and a revolving door of supporting characters surpassed only by 30 Rock and Seinfeld, the thing that I’ve loved the most about Parks and Rec is how familiar the characters are. Yes, Ben Wyatt is a total dork who loves board games and knows how to make spreadsheets and stuff, but he has great taste in music. Specifically, like me, he’s a man who won’t let go of the classic ’90s alternative genre and especially miss Kay Hanley from Letters to Cleo. That woman stole a teenage Burnsy’s heart, or at least she dueled Lisa Loeb and Tanya Donelly for it, and it was great to see that one of the greatest TV shows that has ever existed brought Kay back into the spotlight one more time.

There are other, better moments on Parks and Recreation — I came THIS CLOSE to picking Ann, April, and Donna’s luscious three-part harmonies to “Time After Time — but Leslie rapping “Parents Just Don’t Understand” in the Season 2 premiere “Pawnee Zoo” was the moment the show went from a disappointment (Season 1) to one of the best sitcoms of all-time (every season that’s not Season 1).

My favorite scene is a Chris Pratt ad lib in a deleted scene from the Season 4 gag reel:

If I can’t choose a deleted scene, I will settle for my most recent favorite, Werner Herzog selling his haunted house to April and Andy because he wants to move closer to Disney World. Everything about it is perfect, from April and Andy’s differing reasons for loving the house, to Werner Herzog’s wernerherzogness, to someone finally acknowledging what I picture in my head when I read comments from Disney superfans.

The Swanson Pyramid of Greatness provides a wonderful deep dive into the essence of Ronald Ulysses Swanson, but this sentiment (offered in response to Ann’s question about whether he’s “scared to eat in a bowling alley”) epitomizes Ron on a more succinct level. For me, it’s the quintessential Ron moment.

When Dan Goor wrote the line, it “rattled the furniture” in the Park and Recreation writer’s room, according to Mike Schur (h/t Poking a Dead Frog). It had a similar effect when it played in my living room.

I think I love the whole “Treat Yo Self” thing because I can sort of relate to it. For the past few years on my birthday, I’ve been using the day to do something similar. Typically, I get a massage, go see a movie, go out for a big steak, eat some fine chocolate, etc. I even saw a French Quarter psychic this year. It was silly and wonderful.

Picking a favorite Parks and Recreation moment feels like a mother choosing between her own children, so I’ll go with that was, for me, one of the most memorable. Up until this point, I had only caught a handful of episodes from the first and second seasons and never got hooked, and it wasn’t until Parks changed time slots to after The Office that I became a regular viewer. But it was the second episode of the third season — the fantastic “Flu Season” — that got me completely hooked, at the moment Andy Dwyer successfully convinced Ron Swanson to try out a new cuisine. It was right then that I realized: Oh snap, this show is really f*cking funny. (Bonus points for “stop pooping.”)

Parks and Recreation took a full season to truly hit a groove. Every Parks fan knows this. Season 2 was well back-logged on my DVR when I could no longer resist the buzz about the show “finding it’s form,” so I decided to give the Halloween “Greg Pikitis” episode a chance to win me over. Needless to say, after watching, I immediately caught up on all of Season 2 and haven’t missed an episode since. Seriously, just watch this scene.

Andy Dwyer acting out his favorite movies captures most of what I love about the character in one fell swoop. I’ve always felt he elevates the show to that level it didn’t have in Season 1 and this is proof. He’s got that innocence, he’s fun to be around, he’s goofy, and he likes some of the the same things I like. It was either this or the scene where he does a full gainer into the pit, so I went with this. Also I enjoy Rambo and Road House without irony, so that’s a plus. There are many other moments, sure, but when tasked with finding a gem of my own to use for this fond farewell to Parks and Rec, I couldn’t resist.

It’s a tie for me, but not in the I-can’t-choose-between-these-two-scenes kind of way. Chris Pratt is one of the show’s best improvisers, and his shining moment is when Andy tells a sick Leslie she might have “network connectivity problems.” Yet as funny as it is, I think showrunner Mike Schur’s angry reaction to the line is even better. Why is Schur so angry about it? Because he didn’t write it, that’s why.

Jerry’s Fart Attack. This scene is the perfect illustration of what makes Parks and Recreation so incredibly good: Their ability to take something that should be sad, that should be dark, and turn it into not only one of the funniest gags in P&Rs run, but the moment that made me laugh harder than I have at a television show in years. More impressively, the sequence broke all the rules of comedy. A heart attack should not be funny. We should not laugh at someone who is having a heart attack. Fart jokes aren’t funny. And yet, here we are, weeping with laughter at a man who can’t stop farting (and apologizing) while he’s in the midst of a coronary.

“The Fight,” written by Amy Poehler, was arguably one of the best, most defining episodes of the entire series, and the best moment of this episode and the most magical, wonderful moment was its Snake Juice-blessed montage of drunken glory. From Leslie’s weepy anger at her fight with Ann to April’s Spanish to Andy’s dulcet tones to Ron’s be-hatted dance and everything in between, moments like this are exactly why we so love and will so miss our Pawnee friends. Bababooey.