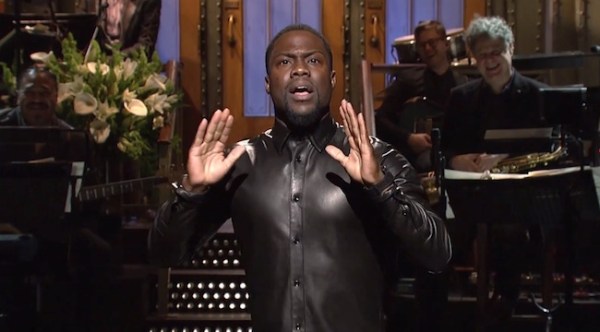 First of all, welcome to the now-fourth home of SNL Scorecard since its inception back in 2010, as it’s traveled from Movieline to Huffington Post to ScreenCrush to, now, here … safe and sound at Uproxx. (Anyway, the point is, yes, this may seem new to you, but it’s not really. But if it does seem new, then “hello.”)

This Kevin Hart-hosted show is a weird one for me, because I attended dress rehearsal last night – which I’ve honestly found makes it somewhat harder to write about the show. I’m reviewing the live show, which I watched later, but it’s also impossible for me to forget what I saw at dress – which includes sketches that I’m still wondering why they were cut over some that made it and sketches on the live show that were truncated versions of what I saw before. (For example, there were three “Weekend Update” segments at dress rehearsal, all great, but the live show only kept Kate McKinnon’s.) Now, this happens every week, but sometimes it’s easier to live life not knowing there’s a better version of something you like.

Anyway, I’m now convinced Kevin Hart is a good SNL host. This was his second time hosting (I still have Tim Robinson’s “Is it a B Shirt?!?!?” sketch stuck in my head from the last time Hart hosted) and he really is everything that makes a good host: energetic, up for anything, quick on his feet, and he looks like he’s really happy to be there. So, how about we get this first Scorecard of 2015 (and first ever at Uproxx) started…

“Listening Party” (Hart, Pharoah, Jones, Thompson, Killam, Moynihan, Davidson, Bennett, Strong) Kevin Hart is a human dynamo in this sketch. As each “Pew pew pew! Bang bang! Gunshot sound!” went on, it got funnier and funnier. And it’s Hart who completely sells this ridiculousness. And then to top it all off, we get a Weekend at Bernie’s reference. And the audience was really into this sketch. Once more: “Pew pew pew! Bang bang! Gunshot sound!”

“Bushwick, Brooklyn 2015” (Hart, Pharoah, Thompson, Strong) Everything about this short was about misdirection, and they pulled if off pretty wonderfully. (Kevin Hart strolling into the mayonnaise shop was a pretty great shot.) And, by the end, just when you think you’ve figured out where this is going, it pulls the rug out from underneath you again. This actually felt more like good filmmaking than just a good SNL pretaped short.

“Get on Up” (Hart, Ensemble) This was a lot more esoteric than it ever needed to be. What seems like a broad joke – Kevin Hart as James Brown; and Hart really does do a good James Brown – instead traded on minutiae. And it somehow worked. This feels like it shouldn’t have worked! But, yet, here it is and it somehow all does work.

“Kevin’s Son” (Hart, Jones, Pharoah) I usually hate watching an impression done in front of the real life person. You know, like when Will Ferrell is doing Alex Trebek, but then out of the blue here comes the real Trebek. Anyway, that was not the case this time and Pharaoh actually found a clever way to do his Kevin Hart impression directly into Kevin Hart’s face and not have it seem convoluted or dumb. Jay Pharoah is inching closer and closer to national treasure status.

“Calvin Klein Ads” (McKinnon, Strong) I’m starting to worry that Kate McKinnon actually is Justin Bieber. (The score reflects all the divided segments as one sketch.)

“Kevin Hart Monologue” (Hart) When Seth Meyers gives interviews about SNL, he’ll usually say that the monologue has three options: take fake questions from the audience, a “surprise” pop in, or some sort of musical number. This is what I like about when a comedian hosts, just let him or her do his or her routine. And Kevin Hart’s rapid quick standup style set the tone for the night – yeah, he earned some groans for the missing shoulder bit, but I suspect that’s the point and Hart looked like he was loving it.

“Cold Open: MLK” (Thompson, Davidson) Here’s some insider info: this was a last minute cold open, added right before dress rehearsal started – it’s remarkable how they can make that addition so easily and seamlessly. Kenan Thompson plays a pretty great disappointed Martin Luther King Jr. and Pete Davidson owns that “wide-eyed innocent” look. (This is probably because Pete Davidson is a “wide-eyed innocent” and I hope he never loses that.)

“Weekend Update” (Jost, Che, McKinnon) Here’s what you miss not being in the audience: Michael Che absolutely cracking up while Kate McKinnon performed Mrs. Santini. Actually, Jost laughs a lot off-camera too, but then becomes straight-faced when the camera pans back to him. I wish we saw more of this on camera because it’s very endearing. We always hear about the rapport between Jost and Che – oh, that’s true, but we’re just not getting to really see that on camera, even though it’s right there as the two do “Update.” Regardless, Jost’s setup and delivery of the Mitt Romney, Charlie Brown joke was just about perfect – as was Che’s delivery on the joke about Pope Francis and his magic castle.

“The Journey” (Hart, Zamata, Thompson, Killam, Strong, Jobes) This looked pretty and was a pretty wonderful concept, but the delivery just seemed slightly off. It reminded me a little bit of the “Cobras & Panthers” sketch from way back in 1996 when Robert Downey Jr. hosted, so I’m kind of a sucker for meta sketches about inappropriate times to sing a song – but this time it just seemed not quite there.

“Soap Opera Reunion” (Hart, Bayer, Killam, Strong, Bryant) To be honest, I’m surprised this sketch made the live show. The fact Kevin Hart’s character couldn’t speak English, even though he’s speaking perfect English, is funnier then the concept of a frumpy song – that includes fart noises – being used specifically for one member of a reunited soap opera cast. It’s one of those things that actually was kind of funny the first time it’s done, but wears itself out by halfway through. (Though, Vanessa Bayer’s look of indignation was pretty great.)

“Why’d You Post That” (Hart, Bayer, Bryant, Mooney) OK, this one is tough. At dress, this played really well. There were still problems with the couch going through the wall, but the audience ate it up. On the live show, the monitor that was there to show us the examples of bad Instagram posts wasn’t working and we could see the fear in poor Vanessa Bayer’s face – because the entire concept of this sketch wasn’t working … on live television. Hart and Bayer did the best they could under the circumstances, but the timing was completely thrown off and it never really recovered. I promise this is a good sketch, but what was broadcast live was, unfortunately, a mess. (And it’s no surprise that what has been posted online is the dress rehearsal version.)