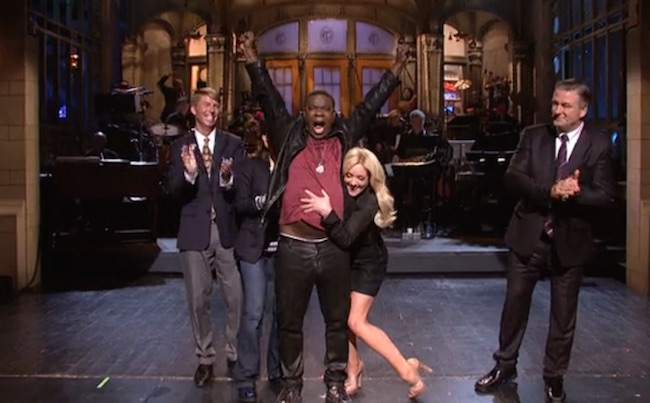 It should kind of go without saying what an important night this was for Tracy Morgan and for Saturday Night Live, but here goes: Sixteen months after an accident that took the life of James McNair and left Morgan in a coma, Morgan returned to 8H to host the most grueling show on television.

This was one of those shows where it feels sort of ridiculous to judge the sketches — the fact Morgan is hosting a live television show at all is a minor miracle — but that’s how I felt before the show. Now that the show has aired and it just happened to be this good, maybe it isn’t so ridiculous? The fact that Morgan could come back and be a part of something this good is remarkable. Tracy Morgan was incredible — and not in a, “Oh, let’s be nice to him because it’s his big comeback” sort of way. It’s wonderful to see everything come together — the writing, the performances, the surprise guests, a camel — for what turned out to be an extremely memorable show.

“Family Feud: Extended Family” (Ensemble) The “Family Feud” sketches have a tendency to devolve into just an excuse to do celebrity impressions. There is nothing particularly clever about them. Then comes along this show’s entry, which took a tired, worn out, beat up sketch idea and turned it into something truly clever and fresh. When I saw Morgan as the head of the opposing family, I guffawed out loud. (GOL?) This was a great twist and great comedy sketch writing.

“Cold Open: Democratic Debate” (David, Rudnitsky, Baldwin, Mooney, McKinnon, Killam) We just knew the fact that Bernie Sanders was introduced last that something fun was going to happen. Then here comes Larry David, 30 years after his short-lived SNL writing stint, and blows the roof off the place as, really, the only person who could do Bernie Sanders justice.

“Yo! Where Jackie Chan at Right Now?” (Morgan, Thompson, Pharoah, Mooney, Moynihan, Killam, Zamata, Davidson, Jones) This was so stupid. It was also kind of genius. It went from me thinking, “God, this is dumb,” to laughing and laughing even more. Then when it hit the montage of people explaining that they don’t know where Jackie Chan is, I decided this should win a Nobel Prize.

“Tracy Morgan Monologue” (Morgan, Baldwin, Fey, Kraowski, McBrayer) We basically got an extra episode of 30 Rock because of this monologue.

“Mitchell’s Fake Cocaine” (Bennett, Bayer, Jones, Davidson, Mooney) The look on Kyle Mooney’s face when Beck Bennett explains that all the cocaine is gone is what makes Mooney so great — good gracious, he’s so great at those little mundane moments. Anyway, this sketch is really clever, to the point I started questioning if I’d purchase this if it were a real product. I think I might.

“Brian Fellow’s Safari Planet: A Beaver and a Camel” (Morgan, Davidson, Bryant) How great was it to hear Tracy Morgan yell, “I’m Brian Fellow” again? Also, I would have loved to see the look on people’s faces on the street as a camel is walked into 30 Rock so it can appear in this sketch. (OK, yes, there’s a giant underground freight elevator that’s accessed across the street to the north of 30 Rock and I’m sure this camel was driven down there without anyone being the wiser — this is how they can get a full-sized car on stage — but I choose to imagine it being walked in the front door.)

“Weekend Update” (Jost, Che, Fey, Thompson, Morgan) Here’s what I’m starting to notice about Jost and Che as hosts: if the show is going well, they seem to bounce right along with that energy. This was the case this week. But if the show’s not going well, Jost especially wears his displeasure on his face (as we saw two weeks ago). Jost and Che are at a point in which they can keep the momentum going, but they don’t really save shows. And this week they did a nice job of keeping the momentum going (and there was another gun joke, so this seems to be the new M.O. going forward from last week). But then Tina Fey shows up and blows the roof off the place with her Playboy monologue in an almost, “this is how it’s done, boys” moment. And it was great to see Kenan Thompson and Tracy Morgan share an “Update” moment together. (It’s weird that Morgan and Thompson never overlapped as cast members — Morgan left in the spring of 2003, Thompson joined that fall — because they play off each other with the efficiency of two people who have worked together for years.)

“Astronaut Jones” (Morgan, Ensemble) “Astronaut Jones” has been fooling me for 13 years now. I always forget the punchline that there’s never any substance to these. We see the long intro, the elaborate sci-fi looking set — then we get a few seconds of new action before the long outro. I laugh every time that closing theme plays. And I love a) that this sketch is still recurring and b) they use the same intro from 13 years ago.

“Standoff” (Morgan, Pharaoh, Killam, Zamata) The concept is funny and the production values looked great, but there just felt like something was missing. It felt like there was a payoff that never arrived.

“Good Morning Song” (Morgan, Killam, Rudnitsky, Strong, McKinnon, Moynihan, Zamata, Bryant) I loved the stage production, the singing, the choreography — everything was set up for something. Then the punchline fell flat and the sketch ended.